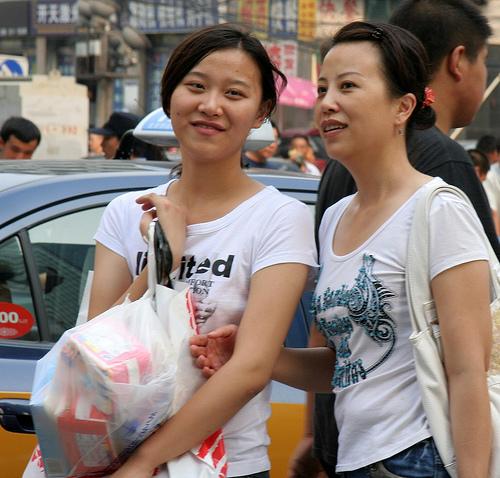 Liu Yang, a coal miner’s daughter, arrived in Beijing this past summer with

a freshly printed diploma from Datong University, $140 in her wallet and an air of invincibility.

Her first taste of reality came later the same day,

as she lugged her bags through a ramshackle neighborhood, not far from the Olympic Village,

where tens of thousands of other young strivers cram four to a room.

Unable to find a bed and unimpressed by the rabbit warren of slapdash buildings,

Ms. Liu scowled as the smell of trash wafted up around her.

“Beijing isn’t like this in the movies,” she said.

Often the first from their families to finish even high school,

ambitious graduates like Ms. Liu are part of an unprecedented wave of young people all around China

who were supposed to move the country’s labor-dependent economy toward a white-collar future.

In 1998, when Jiang Zemin, then the president, announced plans to bolster higher education,

Last May, that number was more than six million -- and rising.

It is a remarkable achievement, yet for a government fixated on stability such figures are also a cause for concern.

The economy, despite its robust growth, does not generate enough good professional jobs to absorb the influx of highly educated young adults.

And many of them bear the inflated expectations of their parents,

who emptied their bank accounts to buy them the higher education

that is presumed to guarantee "the good life."

“College essentially provided them with nothing,” said Zhang Ming,

a political scientist and vocal critic of China’s education system,

who may not be aware of the extent to which that is true of American "higher" education as well.

“For many young graduates, it’s all about survival.

If there was ever an economic crisis, they could be a source of instability.”

In a kind of cruel reversal, China’s old migrant class —

are now in high demand,

But the supply of those trained in accounting, finance and computer programming now seems limitless --

and their value has plunged.

Between 2003 and 2009, the average starting salary for migrant laborers grew by nearly 80 percent;

during the same period, starting pay for college graduates stayed the same,

although their wages actually decreased if inflation is taken into account.

who move in search of work like Ms. Liu:

It is a reference to their immense numbers — at least 100,000 in Beijing alone —

and to the fact that they often settle into crowded neighborhoods,

toiling for wages that would give even low-paid factory workers pause.

“Like ants, they gather in colonies, sometimes underground in basements, and work long and hard,”

The central government, well aware of the risks of inequitable growth,

has been trying to channel more development to inland provinces like Shanxi, Ms. Liu’s home province,

where the dismantling of state-owned industries a decade ago left a string of anemic cities.

Despite government efforts, urban residents earned on average 3.3 times more last year than those living in the countryside.

Such disparities — and the lure of spectacular wealth in coastal cities like Shanghai, Tianjin and Shenzhen — keep young graduates coming.

“Compared with Beijing, my hometown in Shanxi feels like it’s stuck in the 1950s,”

said Li Xudong, 25, one of Ms. Liu’s classmates, whose father is a vegetable peddler.

“If I stayed there, my life would be empty and depressing.”

While some recent graduates find success, many are worn down by a gauntlet of challenges and disappointments.

Living conditions can be Dickensian,

but sleeping, eating and doing the laundry.

Which differs how, exactly, from everywhere else in the world these days except maybe Europe ???

But what many new arrivals find more discomfiting are the obstacles that hard work alone cannot overcome.

many from the growing crop of third-tier provincial schools,

earn them little respect in the big city.

And as the children of peasants or factory workers, they lack the essential social lubricant known as guanxi, or personal connections,

that greases the way for the offspring of China’s nouveau riche and the politically connected.

Emerging from the sheltered adolescence of one-child families,

they quickly bump up against the bureaucracy of population management, known as the hukou system,

which denies migrants the subsidized housing and other health and welfare benefits enjoyed by legally registered residents.

about 17 million more than there were just four years ago.

“China has really improved the quality of its work force,

but on the other hand competition has never been more serious,”

Given the glut of underemployed graduates, Mr. Peng suggested that

young people either shift to more practical vocations like nursing and teaching or recalibrated their expectations.

“It’s O.K. if they want to try a few years seeking their fortune,

but if they stay too long in places like Beijing or Shanghai,

over the exuberance of Ms. Liu, Mr. Li and three friends not long after their July arrival in Beijing.

Mr. Yuan had arrived several months earlier for an internship but was still jobless.

“If you’re not the son of an official or you don’t come from money, life is going to be bitter,”

he told them over bowls of 90-cent noodles, their first meal in the capital.

As the light faded and the streets became thick with young receptionists, cashiers and sales clerks heading home,

Mr. Yuan led his friends down a dank alley and up an unsteady staircase to his room.

It was about the width of a queen-size bed, and he shared a filthy toilet

with dozens of other tenants and a common area with a communal hot plate.

Mr. Li smiled as he took in the scene.

Like most young Chinese, his life until that moment had been coddled, chaperoned and intensely regimented.

“I’m ready to go out into the world and test myself,” he said.

The next five months would provide more of a test than he or the others had expected.

For weeks Mr. Li elbowed his way through crowded job fairs but came away empty-handed.

His finance degree, recruiters told him, was useless because he was a “waidi ren,” an outsider,

who could not be trusted to handle cash and company secrets.

When he finally found a job selling apartments for a real estate agency, he left after less than a week

when his employer reneged on a promised salary

and then fined him each day he failed to bring in potential clients.

In the end, Mr. Li and his friends settled for sales jobs with an instant noodle company.

The starting salary, a low $180 a month, turned out to be partly contingent on meeting ambitious sales figures.

they worked 12-hour days, returning home after dark to a meal of instant noodles.

“This isn’t what I want to be doing, but at least I have a job,”

said Mr. Li, sitting in his room one October evening.

Decorated with origami birds left by a previous occupant,

the room faced a neighbor’s less than two feet across an airshaft.

The only personal touch was an instant noodle poster taped over the front door for privacy.

Because he had sold only 800 cases of noodles that month, 200 short of his sales target, Mr. Li’s paltry salary was taking a hit.

And citing the arrival of winter, “peak noodle-eating season,” his boss had just doubled sales quotas.

Mr. Li worried aloud whether he would be able to marry his high school sweetheart, who had accompanied him here,

if he could not earn enough money to buy a home.

Such concerns are rampant among young Chinese men,

who have been squeezed by skyrocketing real estate prices

and a culture that demands that a groom provide an apartment for his bride.

“I’m giving myself two years,” he said, his voice trailing off.

By November, the pressure had taken its toll on two of the others, including the irrepressible Liu Yang.

After quitting the noodle company and finding no other job, she gave up and returned home.

That left Mr. Yuan, Mr. Li and their girlfriends.

Over dinner one night, the four of them complained about the unkindness of Beijingers,

the high cost of living and the boredom of their jobs.

Still, they all vowed to stick it out, according to the New York Times.

“Now that I see what the outside world is like,

my only regret is that I didn’t have more fun in college,” Mr. Yuan said.

In which way, of course, if no other, the China situation differs RADICALLY from the US.