The strategic sea-lane location of the Indonesian archipelago has traditionally been an important facilitator of inter-island and international trade. For instance, centuries ago, it served as a trade link between ancient India and China. In an effort to promote its trade and international relations, Indonesia has gained membership of the APEC, ASEAN, WTO and G-20. Japan remains Indonesia’s chief trading partner as well as the biggest foreign investor. In 2008, the two countries signed the Economic Partnership Agreement (EPA), which is the first bilateral free trade deal of Indonesia. Under the terms of the agreement, Indonesia is exempt from Japanese import duties to the extent of 90%.

Indonesia was the only G20 member to record economic growth during the global financial crises of 2008-09. Significant reforms were introduced under the first administration of President Susilo Bambang Yudhoyono to boost economic growth. Some of these included capital market development, the use of Treasury bills, and tax and customs reforms to boost trade. During 2009, Indonesia exported goods worth $115.6 billion, which was lower than the $139.3 billion worth of good exported the previous year. The value of imports decreased from $116 billion in 2008 to $86.6 billion in 2009.

Here are the major export commodities of Indonesia

The following graph throws light on the major export partners of Indonesia, along with the export percentage, as of 2008. 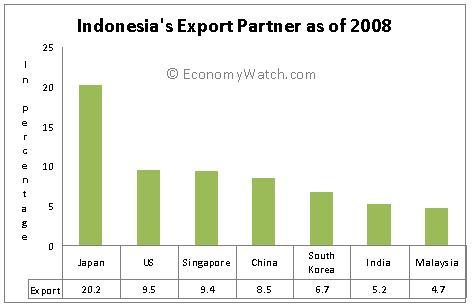 Here are the major import commodities of Indonesia

The following graph throws light on the major import partners of Indonesia, along with import percentage, as of 2008. 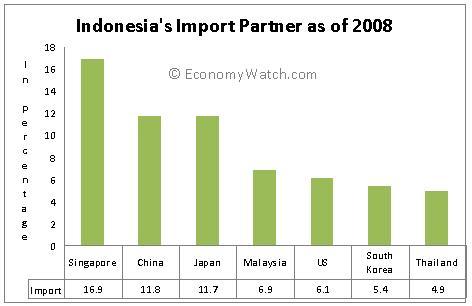