Egypt’s trade profile is characterized by huge trade deficits. The economy is highly dependent on oil exports, which is its major source of foreign income together with tourism receipts and US financial and military aid. It has to import most of its food, other commodities and equipment, since both its agricultural and industrial sectors are not well-developed.

Egypt’s 2010 exports trade grossed over US$29 billion, a 22% surge from the previous year’s level.

Oil export is central to the Egyptian economy. Egypt produces 630,600 barrels of oil a day, and  exports 155,200 barrels per day, approximately. However, the country has huge oil reserves, 37 billion barrels proven and potentially more in uncharted areas, which can act as fuel for the economy for coming decades.

Apart from crude oil and petroleum products, the country also exports metal products, cotton, textiles and chemicals. Before World War II, cotton made up 90% of Egypt's exports, while cotton textiles had grown to 16% of exports by 1970. By 1985, however, oil had come to dominate trade, making up around 80% of exports. 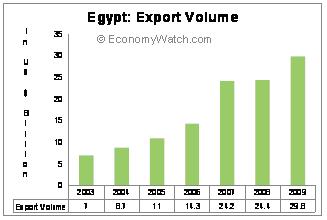 Due to surplus imports, Egypt has had a negative balance of trade since the 1980s. Based on total import volumes, the country ranks 49th in the world.

Food, commodities, equipment and wood products are the major items of import. 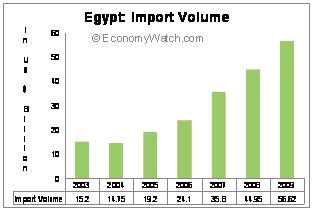 Previously, Egypt used to be a strong trade ally of the communist bloc. Since the 1979 Camp David peace agreement with Israel, Egypt has become a staunch US ally, from whom it receives massive financial and military subsidies. It has gradually shifted trade partnerships to the western world, and enjoyed strong (but uneven) economic growth as a result. Egypt has signed several international trade agreements with partnering countries that govern the country’s international trade.