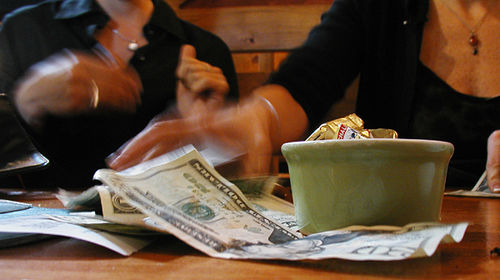 Are You Careless With Your Cash? You’re Not Alone.
Credit: emdot

Let’s face it, we all have our bad money habits that border on shameful from time to time. But would you be more shocked to find out that as you “buy now and worry later” on your credit card – hordes of others are doing the same? We’re all trying to get out of debt, but only end up burrowing deeper into it. It’s time for some eye-opening credit card and debt statistics and take stock of your finances and control of your financial destiny.

This Easter weekend, check out these 12 shocking personal finance statistics and tell us where you fit in the big picture:

1.      Fifty percent of Americans have less than one month’s income saved for a rainy day. Top personal finance advisors will tell you – and especially drawing from lessons in the economic crisis to have at least six months income saved, just in cas

2.      Bachelor Degree holders earn US$25,000 more per year than high school diploma holders. However 2 million fresh graduates are fresh out of jobs, 317,000 waiters have college degrees.

3.      The average student loan is US$23,186. Americans collectively owe more than US$875 billion on student loans – which is more than the nation’s credit card debt. The student loan debt in the US increases at a rate of US$2,853.88 per second.

5.      The average loss in US house prices during the economic crisis was 13 percent. In the UK, that figure is still 18 percent.

6.      You spend 12-18 percent more when you swipe your card than when you use cash. McDonalds observed their average transactions rose from $4.50 to $7 when customers were allowed to use credit cards to make their purchase instead of cash. Research conducted revealed people spend more when they use their cards even if they paid off their credit card balance each month.

8.      Fifty-seven percent of households don’t have a budget according to a recent study by Harris interactive. Planning and sticking to a household budget is the first step in taking control of your finances, controlling what you spend – and building a savings nest egg.

9.      According to Money magazine's audience poll:

10. Thirty-two percent of home loan applications were rejected last year. Showing just how many of us, are really financially responsible enough to be considered for the responsibility (and eligibility) of a mortgage.

11. There were 159 million credit card holders in the US in 2000. In 2010 that figure is expected to grow to 181 million. Despite the harsh lessons learnt during the economic crisis, people continue to apply for credit cards – and banks continue handing them out.

It looks like the problem in the US is lack of good employment opportunities for graduates and loose credit controls. People are spending more than they make and it shouldn’t be the case.

But if you are in trouble with credit card debt and rising interest rates on your home loan, invest some time and keep your eye out for superb refinancing deals and increase your repayments. In the meantime, be prudent with your cash and at least start by saving – as well as paying your bills.

How much debt are you in and how do you plan to get out of it?

Some information taken from Own The Dollar.

Check out this cool infographic on America’s credit card debt::