The Symbolic versus Economic Value of the New Suez Canal 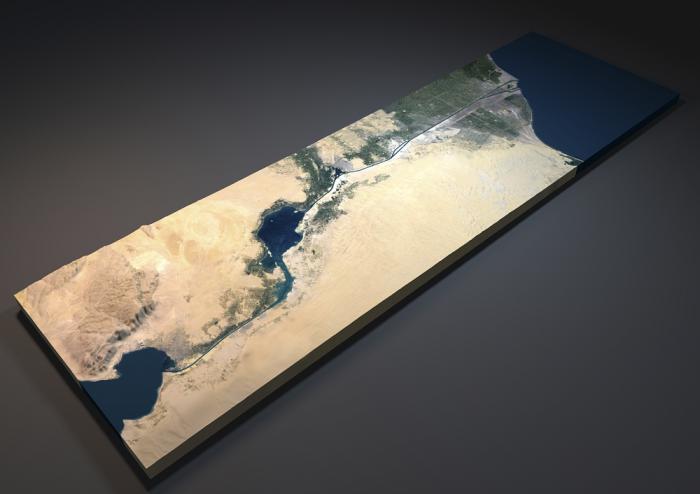 Egypt has opened a second lane to the Suez Canal amid much fanfare. The US$8 billion dollar expansion adds 35km of new channels to the existing canal and another 35km where existing bodies of water were dredged to make way for larger ships. This will supposedly increase capacity from 50 transits a day to 97 and cut waiting times from 18 to 11 hours, which the Suez Canal Authority claims will more than double annual revenue to US$13.2 billion by 2023.

By cutting the distance between Europe and Asia by 43%, the Suez Canal’s opening in 1869 dramatically lowered the cost of moving goods between the two continents. Suez – like the Panama Canal, which is also currently undergoing expansion – drew distant places together, facilitated the expansion of national economies, and accelerated globalisation.

Yet in the 21st century, driven largely by growth in China’s manufacturing exports, there are now many more ships plying the sea-lanes. In addition, these ships are increasing in size. The world’s largest is the size of four football fields and can carry 19,000 20-foot cargo containers. As a result, the narrow passages that provide economic links between centres of production and consumption – like Panama, Suez and Malacca – are as much obstacles to global trade as facilitators of it.

Imperatives to smooth the flow of commodities, as well as provide insulation from the disruptions of piracy, are also driving the development of alternative routes. These include the new Chinese-backed Silk Road initiative that connects China to Europe over land and sea, and the Russian-controlled Northern Sea Route through the Arctic, which is becoming more accessible because of climate change processes. The expansion of Suez is therefore part of a much larger picture of global growth in shipping.

Shipping routes are not purely about supply chains and economics. They are culturally and symbolically laden – particularly because they involve re-tracing historical trade routes. European legacies of discovery and natural conquest live on through the desire to master routes across the Arctic. Similarly, the Chinese government’s Silk Road initiative, dubbed “one belt, one road”, invokes an imagined community of trade, linking China to both its neighbours and its past.

As anthropologist Brian Larkin proposes, material infrastructure is often implicated in dynamics that have little to do with their technical functions. The carving of these routes is as caught up with the carving of national identities, as it is with extending a state’s geopolitical reach and increasing its revenue. The recent opening of the new Suez Canal is as much a symbolic response to terrorist threats by the Egyptian government as it is an attempt to bolster Egypt’s global standing.

Indeed the speed of the canal’s upgrade has astonished many. Completed in just 11 months, trade routes now seem subject to the same accelerated cycles of upgrade and obsolescence as the goods that move through them. Drummed up by their architects and promoters, there is also a similar sense of hype and anticipation that is built around these projects, which invariably all promise to transform global trade.

Yet, even with the expansions, Suez and Panama will still not be able to accommodate the world’s biggest oil tankers and container ships, making them in a sense, already obsolete. A Chinese consortium, however, is developing a new 175-mile long canal through Nicaragua, which will be capable of handling the world’s biggest vessels. The project will provide an alternative to the Panama Canal, but faces vociferous opposition from the farmers, peasants and indigenous groups whose lands are set to be annexed by this new artery of global trade. Thousands of people were reportedly evicted from their homes to facilitate Suez’s expansion too.

There are inevitable ecological implications associated with reshaping land and seascapes on such a vast scale too. Suez’s opening in the late 19th century not only facilitated the global movement of goods, but the massive transfer of invasive species. Some 350 non-native species are thought to have entered the Mediterranean via the canal, many of which pose significant threats to human health and local ecosystems.

For instance swarms of “nomad jellyfish”, which entered the Mediterranean via Suez in the 1970s, frequently make commercial fishing impossible, can close tourist beaches, and have even temporarily disabled a power station. The enlargement of the canal, scientists have warned, will increase the number of invasions.

Footprints in the sea

Unlike paths etched through landscapes, oceans retain no footprints. However, the intensity of modern-day dredging, as well as the largescale transfer of marine biota, means that seascapes will bear the mark of these projects long after the activities, which gave rise to them, cease.

The expansion of Panama, scheduled for completion next year, has triggered a wave of frenetic dredging activity along the Atlantic coast, as ports are forced to expand or face losing traffic to competitors. New York’s port alone has moved some 42m cubic yards of dirt over a decade in anticipation of the opening of an expanded Panama Canal. Thousands of years from now, archaeologists will be able to find the channels carved through our oceans by all this movement.

Therefore, while the economic significance of the expanded Suez is in doubt, its symbolic value is certain. Its legacy is unlikely to be its consequences for global trade, but to further contribute to such a dramatic reshaping of the planet by human activity.