With Her Debt in Tow, Where is China Heading? : Michael Pettis 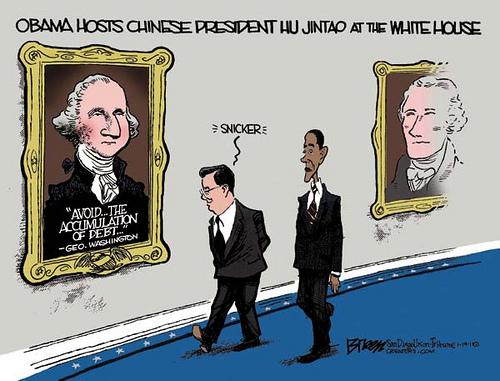 China’s success story is one that would certainly go down the chapters of economic history. While the West firefights its debt crisis, many fail to realize that China too has her own fair share of debt. The overinvestment theory has gained greater attention from academics and politicians alike, and China is now looking to boost internal consumption as its engine of growth. However, unless Beijing has new tricks to cover its losses, her bad debt will put downward pressure on consumption growth.

Before starting on the subject of debt I wanted to make a quick reference to something sent to me by Charles Horner, a senior fellow at the Hudson Institute.  I am glad to say that the overinvestment thesis is much more widely acknowledged today than it was even two or three years ago, but one myth, I think, is that most of the overinvestment excesses in China are concentrated in the real estate sector.  I have always argued that it is infrastructure where the most amount of investment has been wasted.

Its impossible to prove one way or the other, but Horner sent me a paper in the Oxford Review of Economic Policy, by Oxford’s Bent Flyvbjerg, with the rather alarming title “Survival of the unfittest: why the worst infrastructure gets built—and what we can do about it”, which suggests why we need to be so worried about infrastructure spending in China – aide from the fact that the numbers are simply huge.

In the paper Flyvbjerg looks at infrastructure projects in a number of countries (not in China, though, because he needed decent data) and shows how the benefits of these projects are systematically overstated and the costs systematically understated.  More important, he shows how these terrible results are simply the expected outcomes of the way infrastructure projects are typically designed and implemented.

It is not a very happy paper in general, but I am pretty sure that many people who read it probably had a thought similar to mine: if infrastructure spending can be so seriously mismanaged in relatively transparent systems with greater political accountability, what might happen in a country with a huge infrastructure boom stretching over decades, much less transparency, and very little political accountability? Isn’t the potential for waste vast?

Who knows, but it seems that Beijing is increasingly worried about that possibility.  Here is an article from this week’s Caijing:

A golden but brief era for urban railway suppliers, builders and related companies across China appears to have ended in recent months.  Local governments nationwide have slashed infrastructure spending since last summer, and the urban rail business has slowed to a crawl after several years of rapid growth.

…NDRC imposed extremely tight regulations on the approval process for subway construction before 2008, said Jin Yongxiang, general manager of Beijing’s Dayue Consulting Firm, which advises subway projects.  Jin said “the situation took a 180 degree turn” in April 2009, when the State Council reduced the minimum capital requirement for urban rail projects to 25 percent. At that time, a NDRC source told Caixin, credit was loose and bank loans were easy to obtain.

“In some cases, the NDRC gave a nod to an urban rail project even if a local government had yet to meet the minimum capital requirement,” the source said. “With NDRC’s approval for subway projects, banks were willing to lend and would not hold city governments to the capital requirement.”  In some cities, though, enthusiasm for the urban railway building went too far.

For example, rail lines were built where few people live on the outskirts of the Hunan Province city of Changsha, said Wang Chengli, an urban transit professor at the city’s Central South University. Today, exit gates for some of the city’s finished subway stations lead to farm fields.  Wang said Changsha authorities installed far fewer kilometers of track in the city’s center than in its suburbs. Each project was approved by the central government, he added.

Zhang says China learned important lessons from the fast-track subway program. For example, he now thinks subways should never have been built in “many cities.”  “The only cities that should have built subways are super-large ones such as Beijing, Shanghai, Tianjin, Shenzhen, Wuhan, Nanjing and Guangzhou,” Zhang said. “Provincial capitals such as Shenyang and Taiyuan can handle their transit needs with a single, light-rail line.”  Subways can be uneconomical in smaller cities. Zhang said final costs for many projects were often much higher than a local government’s estimate.

Little by little the claim repeated by so many China bulls – that you can never spend too much on infrastructure – is being eroded. It is possible, it turns out, to waste a lot of money even on infrastructure, and if debt-fueled investment is being wasted in China, as I have been arguing for over half a decade, then without doubt debt must be rising at an unsustainable pace. Last week Bloomberg had this article, which suggests that even the official numbers, which show debt soaring, may be understating the reality:

Debt accumulated by companies financing local governments such as Tianjin…is rising, a survey of Chinese-language bond prospectuses issued this year indicates. It also suggests the total owed by all such entities likely dwarfs the count by China’s national auditor and figures disclosed by banks.  Bloomberg News tallied the debt disclosed by all 231 local government financing companies that sold bonds, notes or commercial paper through Dec. 10 this year. The total amounted to 3.96 trillion yuan ($622 billion), mostly in bank loans, more than the current size of the European bailout fund.

There are 6,576 of such entities across China, according to a June count by the National Audit Office, which put their total debt at 4.97 trillion yuan. That means the 231 borrowers studied by Bloomberg have alone amassed more than three-quarters of the overall debt.

The fact so few of the companies have accumulated that much debt suggests a bigger problem, says Fraser Howie, the Singapore-based managing director of CLSA Asia-Pacific Markets who has written two books on China’s financial system. “You should be more worried than you think,” he said of Bloomberg’s findings. “Certainly more worried than the banks will tell you."

See also: Myths Debunked: Why China Will Have A Soft Landing: Stephen S. Roach See also: China’s 2012 Outlook: The Bad News about the Reserve Cut See also: Can China Alone Save the Eurozone?