The World's Richest Family - You Didn't Know About (Part 1) 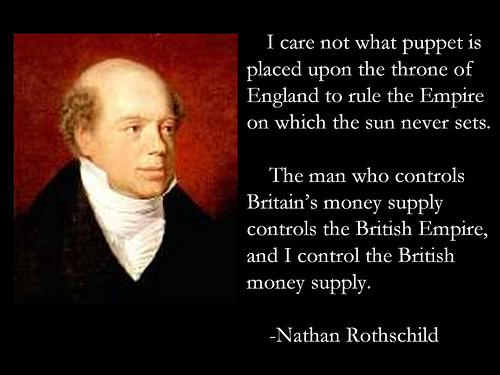 It is difficult to conceive today of how rich and powerful the Rothschilds became in the 19th century. It is necessary to imagine all the great modern banks, such as Morgan Stanley, Goldman Sachs, JP Morgan and Merrill Lynch, forming one gigantic conglomerate.

From their five European bases, the Rothschilds became masters of the political universe. They lent money to Kings, including England’s George IV, dined with Prime Ministers like Disraeli and Gladstone, funded the creation of a pan-European rail network and financed wars, including both sides in the Napoleonic Wars.

Their status was put most eloquently by the contemporary newspaper Nile’s Weekly Register in 1835:

“The Rothschilds are the wonders of modern banking...peering above kings, rising higher than emperors, and holding a whole continent in the hollow of their hands....not a cabinet moves without their advice.”

Of Baron Nathan Rosthchild, the head of the English branch, the newspaper said:

“He holds the keys to peace or war. They are the brokers and counsellors of the Kings of Europe and of the Republican chiefs of America. What more can they desire?”

The Rothschilds didn’t just lend money to royals, they also behaved like royalty by marrying each other constantly. In 1836 Nathan’s son Lionel married his first cousin Charlotte Rothschild, who was herself the daughter of Nathan’s brother James, who had married his niece. In other words, her father was also her great uncle. Of Nathan’s seven children, four married Rothschild first cousins. Such inbreeding was genetically questionable, but it bred loyalty and kept money safely in the family.

The Rothschilds ability to form symbiotic links with the powerful became notorious. In 1878, the Earl of Rosebery married Hannah, the only child of Baron Mayer de Rothschild, and the greatest English heiress of her day. Rosebery went on to become British Prime Minister in 1894. Such close links to power continued well into the 20th century. One famous example was the election of the former Rothschild general manager George Pompidou as President of France in 1969. The satirical magazine Le Canard Enchaine reacted with a barbed remark exposing the connection between wealth and power: “RF=Republique Francaise=Rothschild Frère.”

The Rothschilds today have nothing like the power of the 19th century family, but they are still enormously influential, advising Margaret Thatcher over privatisations in the 1980s, and the US Government over the car industry more recently. And they are still mixing socially with high-level politicians. When Sir Evelyn de Rothschild married New York businesswoman Lynn Forester in 2000, they spent the night of their wedding dinner in the White House as guests of Bill Clinton. In the UK, the current British chancellor George Osborne is a close friend of his Oxford contemporary, the multi-millionaire Nat Rothschild. The friendship has provoked rumours of illegal donations to the Tories.

How Did They Do It?

So, how did the Rothschilds rise from Frankfurt’s Judengasse, a narrow street at the heart of the city’s Jewish ghetto, to become the world’s bankers?

Mayer Amschel Rothschild, the founder of the modern dynasty, was born in 1744. He made a small fortune in coin trading. After expanding his business, he dispatched his five sons to set up new branches. One son stayed in Frankfurt, the other four set up branches in London, Paris, Vienna and Naples. Of these, the most important became London and Paris.

The most talented of the boys was Nathan, who arrived in England in 1798, aged 21. After 10 years working as a textile merchant in Manchester, he took a small office near the Bank of England in London, from where he soon realised there was money to be made out of the outcome of wars.

In the greatest coup in the history of banking, he provided financing for the cash-strapped Duke of Wellington’s Army. Wellington was expected to lose and Rothschild was aware that an upset win would send the market soaring.

As the armies closed in, the Rothschilds had a network of agents in place to speed news of the battle back to London. Late on the afternoon of June 18, 1815, a Rothschild representative boarded a fast schooner on the French coast and headed for England. Nathan heard the news a day before anyone else and went into the stock market and sold heavily. Other traders, following his example, sold, too. After the prices had dropped, Nathan bought all the stock he could late in the day. When the official communiqué from Waterloo arrived, the market rocketed, and Nathan had made a fortune.

George Ireland, the author of the acclaimed work on the 19th century English Rothschilds - Plutocrats: A Rothschild Inheritance, takes up the story: “Nathan was engaged by the British government to procure and deliver the coin necessary to finance the last phase of Wellington’s campaign, the final push from Spain into France. He was given a commission of 2.5%. He also delivered the subsidies that Britain was providing to her less solvent allies, principally Russia, Prussia, Austria and King Louis XVIII and his exiled court at Ghent. He managed these operations with the assistance of his four brothers and their agents on the Continent. The commission from these operations made Nathan and his brothers sterling millionaires.”

That was just the beginning for Nathan, who expanded the lucrative business of granting loans to foreign governments over the next few years, culminating in a massive £5-million Prussian loan in 1818.

“The Prussian loan set a new trend in foreign loans,” said Ireland. “For the first time dividends were payable in London rather then abroad, and in sterling rather than a foreign currency subject to exchange rate fluctuations. The loan was a great success, and in 1822, by issuing further loans for Prussia, Russia and the Bourbon government of Naples, Nathan became the leading contractor in the foreign loan market.”

Even more significant than these massive loans, was Nathan’s use of the government bond, which created the world of banking as we know it today. “Nathan operated principally as an underwriter and speculator in the early 19th-century bond market,” said Ireland. “He and his brothers invented, or at any rate popularised, the government bond, which allowed investors to buy bits of the debts of sovereign states by purchasing fixed-interest bearer bonds. Governments liked this because they could use them to raise colossal sums of money. Investors liked them because they could be traded - at prices that fluctuated in relation to the performance of the issuing government - and shrewd investors could make big sums.”

Nathan Rothschild became so important that in 1825 he rescued the Bank of England after a run on gold caused the collapse of 145 banks. But he remained – as has always been the Rothschilds’ way – discreet, avoiding ostentatious behaviour.

“He did not flaunt his money. He was not interested in the trappings of wealth. His only real interest, apart from his family, was his business. His contemporaries remarked on the fact that the richest an in the world should be content to live from 1819 in a pretty villa at Stamford Hill,” said Ireland.

The Rothschilds gradually extended their reach throughout the 19th century. They invested in the Spanish Almaden mercury mines, and the Rio Tinto copper mines, as well as in gold, diamonds and rubies. And in 1886, they bought into the oil trade, forming the Caspian and Black Sea Petrolium Company.

In the 20th century, they remained immensely powerful, but there relative wealth declined. The Great Depression of the 1930s lost them a lot of money, as did the rise of Nazism. But a number of strategic blunders also cost them dearly. According to Professor Niall Ferguson, the author of two books on the rise of the Rothschilds, their biggest blunder was the failure to establish the bank in America. By World War I, J. P. Morgan had eclipsed the Rothschilds as the linchpin of war finance and after the war the Rockefellers dominated.

Meanwhile, new rivals - joint stock banks that drew on the savings of small investors -- were stealing the march on the Rothschilds in Europe.

In France after their bank was nationalised by the Socialist president Francois Mitterrand they slowly built a new business which, under Baron David de Rothschild, rose to the top ranks of the merger and acquisition league tables. Then, in 2003, following the retirement of Sir Evelyn Robert de Rothschild as head of N M Rothschild & Sons of London, the English and French firms merged to become one umbrella entity called “Group Rothschild.” Ownership was shared equally between the French and English branches of the family under the leadership of David de Rothschild. In 2007, the English branch sold their share to the French branch and the French branch now fully own N M Rothschild & Sons.

The mythology of the Rothschilds family lives on. A cursory glance at google’s search engine results for the Rothschilds finds them accused of everything from assassinating presidents, to controlling the world’s banks, to running a global cabalistic conspiracy.

In part two, we look at these accusations and examine whether there is any truth in them.

Read The World's Richest Family - You Didn't Know About (Part 2)