MAD For Oil: Will US Sanctions On Iran Lead To Mutually Assured Economic Destruction? 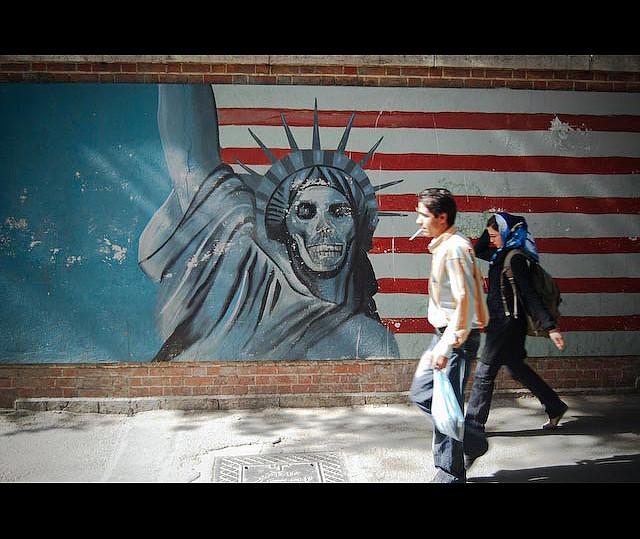 Iran has been pushed into a corner and is fighting for its life. The safest weapon in its arsenal is an economic strategy; and it is the one point where the United States is vulnerable.

There is no doubt about it. Section 1245 of the National Defense Authorization Act that was signed into law by President Obama on December 31, 2011 is having the intended effect upon Iran.

Unlike previous sanctions, Section 1245 attacks the foundation of the Iranian economy. The provisions of the law seek to stop the sale of crude oil and to block transactions between the Iranian central bank and the rest of the world. About 50 percent of the national budget is funded from the sale of exported crude oil that provides 80 percent of the foreign exchange.  "Crude (oil) sales are a trap which we inherited from the years before the (1979 Islamic) Revolution," Ayatollah Ali Khamenei told a gathering of researchers and scientists at the end of July.

An immediate consequence of the legislation has been the plunge in the exchange rate of the Iranian Rial that has lost half its value against the U.S. dollar. A combination of devalued currency and a break down in international bank transfers has created shortages of imported products, including basic food grains. The result is seen in an official inflation rate of 25 percent and an unemployment rate of 12.3 percent.

Before the implementation of the sanctions, Iranian oil exports were the second largest in OPEC at 2.2 million barrels per day.  Today, the current level is around 1.1 million barrels, but that does not take into account the oil leakage through the sanction barriers. A friendly government in Baghdad makes Iraq one of the easier routes to the world market. Shipments of gold bullion through Turkey to Iran indicate that the Iranians are selling to someone.

After nearly thirty years of dealing with American sanctions, the Iranians have developed methods of evading some of the restrictions, but the current application goes far beyond anything faced earlier. The National Iranian Oil Company has been forced to relinquish its monopoly of sales and authorized private traders to market the crude. The Oil Products Exporters Union expects to manage a fifth of exports and claims to have completed arrangements with refiners in Europe.

In spite of the evasive measures that are being employed, The Iranian treasury is still losing about thirty billion dollars per annum, a decline from seventy-two billion in 2011. Beyond that, reduced exports are causing a problem of what to do with the surplus.  On shore facilities have been filled. Seven million barrels are being held at Sidi Kerir in Egypt.

That leaves the tankers as the only other storage choice. Half the Iran tanker fleet of forty-seven ships is already sitting at anchor with tanks full and no place to go.

The less attractive possibility is for the National Iranian Oil Company to continue shutting down wells. Already, production has declined from 3.5 to 3.3 million barrels per day.

Once they are shut down and the pressurizing of the aging neglected wells stopped, salt water seepage will make it costly and difficult to reactivate them.  When they are reopened, production is likely to be reduced.  This is the long-term damage that the sanctions will have upon the economy.

How long can they endure the losses?  That is the question that the Ayatollah has to be asking.

So far, there are no signs that people are starving from food shortages, and there is no indication that people are taking their grievances into the streets.  Regardless, Tehran cannot ignore the long-term damage to the economy and the potential for social disorder.

Right now, the bombs are not falling.  Sooner or later, though, the risk of war must be resolved.  They cannot ignore that Section 1245 is a declaration of war; and must be treated accordingly.  The Ayatollah has said, "Threat for threat."

Ayatollah Khamenei compares the present situation of Iran to Mohammed and his early followers who were besieged for three years in the desert of Saudi Arabia.  When there seemed to be no hope, they struck the surrounding superior army and defeated it at Badr and Kheybar.

He sees Iran is also surrounded by an enemy.  They are being confronted by two carrier battle groups with a formidable destructive capacity that Iran cannot hope to stop or to match; the repeated threats from politicians in the United States and Israel to attack Iranian nuclear facilities; the newest sanctions that are slowly strangling the economy; and Khamenei believes that it is all for the sole purpose of regime change.

That raises the question.  How does a minor military power contend with the forces available to the United States?  The leaders in Tehran talk about closing the Straits of Hormuz and developing new missiles.  It is all bravado that Khamenei hopes will calm anxieties at home and frighten potential aggressors.

Related: Is Iran About to Block the “World’s Most Important Oil Chokepoint”?

Related: Iran Warns West: Ban Our Oil And Prices Will Rise Above $250

Related: Iran Claims It Can Withstand Years of Financial Blockade

Over the three decades of the Islamic Republic, the Iranians have been careful about pushing Washington to the point that it would retaliate militarily.  The Ayatollah is not going to provoke the U.S. to destroy the theocratic regime and his political career.

"....to defend ourselves we will attack on the same level as the enemies attack us," Khamenei said on television in March.  Section 1245 is economic warfare.  That is most likely to be the battlefield that Khamenei will choose and it fits perfectly into the strategies employed over the centuries by the persecuted Shia minority.

Where is the United States vulnerable economically?  It is the draconian character of the sanctions.

At the end of June, Washington did what was expected.  All twenty of Iran's regular buyers were granted six-month wavers that will push the next decision beyond the November election. To have found any of the twenty governments to be in violation of the sanction restrictions would have compelled Washington to deny access to the U.S. financial system.  That would have sparked an economic war with countries taking sides in support or in opposition to the United States.

It is no secret that many governments object to the sanctions and are willing to deal outside of normal channels for a reduced price.  If the Iranians should use the new private traders to dump a few million barrels of oil onto the market at a sharply discounted price, they just might encourage one of these governments to openly defy the United States for a bargain.  Should the United States imposes restrictions upon the offender, that could trigger an unwanted trade war, while ignoring the challenge would render the sanctions meaningless and invite everyone else to go bargain hunting.

Related: Will New U.S. Sanctions On Iran Cost The President His Job?

As a persecuted minority, the Shia have learned that the weaker in a conflict must employ cunning rather than muscle. The philosophy is the core principle of the Iranian Revolutionary Guard that focuses upon the use of asymmetric warfare.  Employing economic tactics is just another form of the asymmetric warfare.

It is the inherent weakness of the alliance that is Iran's strength. The unwillingness of Washington to pressure supposed allies and the simple fact that there are buyers willing to defy the sanctions secretly reveals the cracks in the system. If the Iranians can break through the weak point in the American siege, they will be able to repeat without firing a shot the triumph of Badr and Kheybar.

The Other Side of the Sanctions is republished with permission from OilPrice.com