China’s Ageing Population: Will the Country Grow Old Before It Gets Rich? 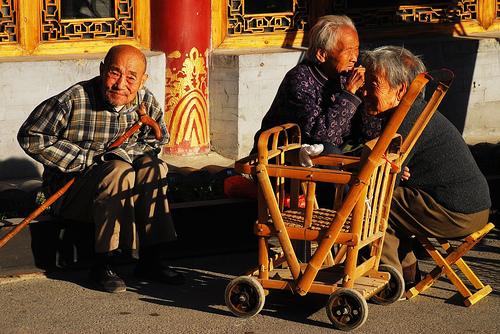 China is one of the top fastest growing economies in the world, and some economists believe China will overtake the US with a larger GDP in a matter of a few years. Last year, the number of millionaires in China grew 12 percent, and while the US still has the most millionaires – they’re 15 years younger in China.  According to some reports, sources suggest China is set to have almost doubled the figures of their billionaire headcount.

The Hurun Research Institute found 55 percent of China’s millionaires have acquired their wealth through private businesses, 20% percent are property developers and 15 percent are stock market speculators. The remaining 10 percent are company executives.

In 2009, the number of households with more than US$1 million reached 670,000; ranking China the third in the world for millionaires behind the US and Japan. However, the wealthy in China only account for 0.2 percent of households. A proportion that is far lower than other countries.

China’s economy has grown exponentially in the last 50 years (even during the global financial crisis) – and it’s expected to continue on the same path without much foreseeable threat.

Except one: its own ageing population.

With more than 160 million people over the age of 60 and its ageing rate gaining pace, China is facing a curious problem: it is greying while still in development, a challenge other economies have only had to face at a more advanced stage.

With life expectancies high in China and an already aged population, economists are asking: Will China get old before it gets rich?

In 2040, the proportion of over-60s in the population will rise from the current 11 per cent to 28 per cent - and possibly even as high as 32 per cent, the year when communist leaders are confident that fast growth will have brought China close to challenging the economic power and strategic size of the United States.

"In Europe, the elder share of the population passed 10 percent in the 1930s and will not reach 30 per cent until the 2030s, a century later," say Jackson and Howe in their paper for Washington's Centre for Strategic and International Studies. "China will traverse the same distance in a single generation."

By then the country will have almost 400 million elderly people who, unless broad pension schemes are started soon, will have no support. Although China has a healthy national savings rate of 40 per cent, households provide only a tiny proportion of savings and most are invested in dwellings.

The issue puts a huge strain on families - and the next generation of Chinese youths who will be (culturally) expected to look after their elderly family members. Ordinary Chinese are coping with a 4-2-1 inverted pyramid, four grandparents to two parents, and all the responsibility of an only child.