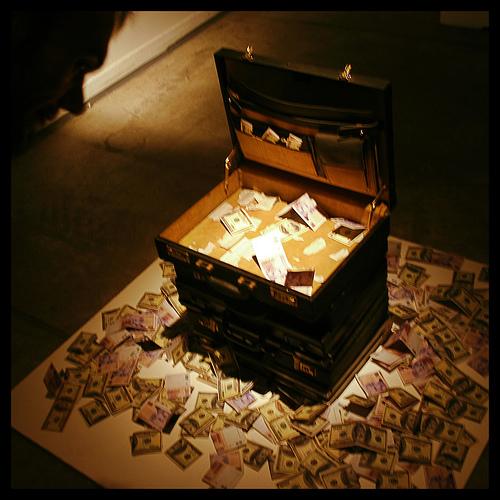 Money laundering is a massive global problem. It allows criminals to infuse billions of dollars of black money into the stream of commerce and business, corrupting financial institutions and officials. However, the precise scale of money laundering is much disputed.

In 1996, the IMF came up with the vague estimation that 2-5 % of the global economy involved laundered money. But, the Financial Action Task Force (FATF), an inter-governmental body set up to combat money laundering, said: “Overall, it is absolutely impossible to produce a reliable estimate of the amount of money laundered.”

The estimate most often bandied around in the media is $1.5 trillion a year, but Dr Dionysios Demetis, the author of the book Technology and Anti-Money Laundering, disputes the figure.

“The broader system of money laundering operations exhibits such a degree of complexity that it is impossible to determine the amount being laundered. The most commonly cited figure of $1.5 trillion is for media consumption alone,” he said.

Few academics will give estimates. But there is one distinguished expert who believes it is possible to give more accurate figures. John Walker, the CEO of Crime Trends Analysis in Australia, has produced analysis which suggests that the scale of money laundering is much larger than had been thought. Using a comparatively simple crime-economic model constructed from readily available international databases, he estimated a total of $2.85 trillion per year, heavily concentrated in Europe and North America.

Walker said: “I’ve been contracted by the UN Office on Drugs and Crime to update those 1998 figures, but sadly, the project has stalled due to the fear of upsetting member countries’ sensitivities. But I would stand by the 1998 figures if we factor in the rise in the value of the dollar. The major criticism of my 1998 figures was that my estimates were way too high.  Subsequent events have shown that any criticism along those lines was laughably wrong,” he said.

The reason the figures still stand up is that recent attempts to combat money laundering have been ineffective, Walker argues.

“I do not believe that anti-money laundering has had any significant impact on rates of global crime, except to have forced changes in the way that the proceeds of crime are laundered.  If I had money to launder right now, I would take advantage of the lack of oversight of international trade prices – particularly in services.  The Global Financial Integrity Project led by Raymond Baker focuses on flows of finance illicitly removed from developing countries, concluding that for every dollar of aid ‘given’ to developing countries, there are $10 going the other way due to corruption, multi-national company tax evasion and straight out fraud,” he said.

In Walker’s model the destinations of money laundering are sometime different from the sources. The US is top again, but with 18.9%, followed by one of the world’s major offshore financial centres, the Cayman Islands (4.9%), Russia (4.2%), Italy (3.7%), China, Romania, Canada, Vatican City, Luxembourg and France.

One necessary update to Walker’s models is that both the City of London and Wall Street now play a bigger part in global money laundering than they did in 1998.

“The capacity of these financial centres to carry out financial operations at larger scales makes them vulnerable despite the perceived strong regulatory initiatives. Also, there is a further perceived legitimacy to the laundering of funds if they go through London or New York,” said Dr Demetis.

In recent years, the banks have been implicated in a number of major money laundering scandals. One of the most shocking involved the Miami-based Wachovia Bank, which admitted responsibility in 2009 for moving $420 billion for account holders thought likely to be involved in the laundering of drug proceeds. Some of the money was traced to the purchase of aircraft used by trafficking organizations to smuggle more than 22 tons of cocaine.

“Wachovia’s blatant disregard for our banking laws gave international cocaine cartels a virtual carte blanche to finance their operations,” said Jeffrey Sloman, the federal prosecutor. Yet, the total fine of $160 million was less than 2% of the bank’s $12.3bn profit for 2009.

The Bank of New York was also fined the derisory amount of $38 million in penalties and victim compensation in 2005 after a six-year investigation of fraud and money laundering involving suspect Russian and US bank accounts and other fraudulent transactions. The bank admitted that it had not adequately monitored and reported suspect accounts, and “accepted responsibility for its criminal conduct”.

Cases such as the ones involving Wachovia and the Bank of New York prompted US fraud investigator Eric Lewis, to tell a congressional hearing last year that powerful tools to stop laundering are not being used “as vigorously and consistently as they could be”. Lewis criticised Wall Street’s due diligence, saying that this “first line of defence” often failed because banks are “heavily incentivised to look the other way”. Lewis also said that the fines imposed on banks were too small to have an effect. He said that until that changed, banks would not be good policemen.

Compliance officers, even when highly motivated to unmask the money launderers, face a resourceful opponent. The launderers are usually professionals with a deeper knowledge of law and finance than the enforcement officers. They are always developing new techniques to avoid detection

Each of those contains a number of typologies that can be re-synthesized with each other. These involve different methods, or different products, such as wire-transfers, e-banking and pre-paid cards. There are literally hundreds of different ways to launder money.”

The introduction of new products has also changed the nature of the laundering process.

“Whereas in the past we could have cross-border bulk transfer of illicit funds, now a large number of pre-paid cards can do the job better,” Dr Demetis said. “Of course, the convergence of the internet with banking facilities has also changed the way in which funds can be laundered. Criminals used to store their profits in various bank accounts. Now they can increasingly leave money online and convert it back to ‘real’ money when there is a need to.

The virtualization of money and its transcendental evolution from its physical to its electronic form will create new opportunities for launderers and new challenges for anti-money laundering.”

There is also a new phenomenon called “reverse money laundering”, whereby legal money is used to fund illegal actions. “Legally earned money can be diverted to support a terrorist cause,” said Dr Demetis. “This differentiation in itself makes the problem of terrorist financing more problematic. It is more difficult in its monitoring, detection and prevention. Also, the small amounts of money required to fund specific terrorist attacks (e.g. the London underground bombings cost an estimated £8,000) imply that this is like looking for a needle in the haystack.”

Not all money laundering involves banks. One common technique for drug dealers, and also terrorists, involves transporting huge volumes of currency in boxes, suitcases, and the concealed compartments in vehicles, on the highways and through airports. It is then smuggled out of the country and placed in a bank in a jurisdiction with lax enforcement.

The scale of money laundering undoubtedly has an effect on the global economy. Walker said:

“The crooks don’t pay tax, so they impose higher taxes on everyone else. They don’t mind paying a premium on legitimate property, so they compete unfairly in the property markets. Honest businessmen are marginalised or eliminated by the cycle of corruption. A country can be seen as a risky place to do business, which can cause a spiral of decline in international trade. Some countries will see increasing poverty, decreasing social order and the rise of extremism all because nothing was done about money laundering.

Dr Demetis agrees with Walker. “It certainly has an effect at both a microeconomic, as well as at a macroeconomic level. As the phenomenon of money laundering penetrates national contexts and creates further corruption and crime, the adverse effects can lead to a systemic degeneracy. Institutions become corrupt or are controlled for the purposes of laundering money,” he said.

So, what are the best ways to tackle the problem?

Walker suggests a change of focus.

“The concentration on money laundering serves the wealthy countries well, because it is based in the concept of ‘suspicious’ transactions.  It is dead easy for a white collar criminal to make transactions non-suspicious, so the burden falls on those people who peddle drugs at the retail end of the market. I would suggest that a return to focussing on the original crime – and particularly the complicity of the legal and accounting professions – would be more effective that what we are doing now,” he said.

Dr Demetis wants to see a more organised approach. “If I could distil the implementation of three key anti money laundering strategies, these would be the training of all personnel, the application of the Risk-Based Approach (RBA), and attempts to improve the transaction monitoring systems that target suspicious behaviour. Training is being implemented but sometimes at a limited scale, and often without employee evaluation. The risk-based approach is in its initial stages of implementation, and transaction monitoring systems still have a long way to go before they are truly effective as it is a very difficult endeavour.”

Greater international cooperation is also essential. “International co-operation is important, particularly in the exchange of information between Financial Intelligence Units (FIUs) in different countries. The problem is there’s a lot of complexity underpinning that co-operation and multiple procedures for establishing bilateral relationships. It’s quite ad hoc at the moment. Another problem is that a number of countries do not even have FIUs for the collection, analysis, and investigation of suspicious transactions. In other words, the basic structures need to be in place before we can move on to more effective measures at a global scale.”