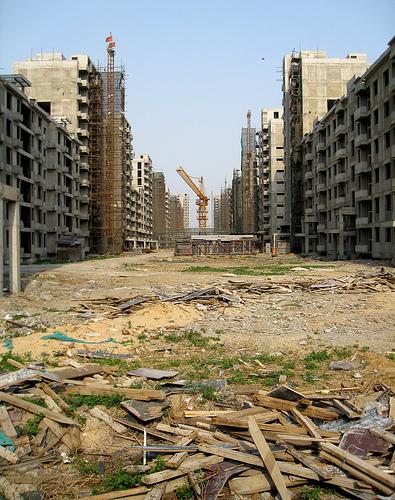 Some say that the best expression of excess capacity and overdevelopment in China is its real estate market. Shanghai, for example, is a prime instance of the property boom that the country has experienced in the past decade. In key cities such as Beijing, property prices has already increased by more than 140 percent, making it unaffordable for a massive majority of homebuyers.

Negative real interest rates for savers are at the heart of what many believe is a burgeoning property bubble. With nominal interest rates going at a pittance, stringent capital controls and volatility in China’s equity markets, there seems to be no real alternative outlets for the nation of savers (China saved 50% of its GDP in 2010) and it is therefore no huge wonder that investors have turned to real estate as investment options.

Away from the bright lights of glitzy urban centers like Beijing and Shanghai, newly built city centres, such as those in Zhengzhou and Tangshan, have popped up on maps, in a race to join in the building boom.

Kangbashi New Area, in Ordos in Inner Mongolia is a curious case study in China’s property boom. Conceived and built in a breakneck speed of five years, Kangbashi boasts state-of-the-art museums, sculpture gardens and streets of modern high-rise apartments. As part of China’s five-year economic plan, Kangbashi was earmarked to be home for 1 million residents. The twist is: Since it’s completion in 2005, only 30,000 people have settled in.

Originally intended as a sub-urban residential site, Kangbashi sits on US$160 billion worth in government buildings alone. Today, Kangbashi is ridiculed and known to the Chinese as a “ghost city”.

Projects like these are not unique to China. Similar cases have been reported in other cities such as Zhengzhou, Tangshan and Dongguan, as part of China’s five-year plan to build 36 million affordable homes and move people out of urban cities.

Are these large-scale constructions actually a response to a strong demand market, and will these projects actually reach a point of fruition? Or will they simply remain a “white elephant”?

The case of Kangbashi illustrates how government policies can actually be part of a process that creates a bubble economy, and along with it, unplanned and unwanted negative externalities.

Why Is China Able To Continue Building: The Numbers Behind It

China’s economy is growing fast, thanks in part to its real estate boom and government-led infrastructure projects. Buildings, constructions, motorways are all part of a national project to transform China into a global economic powerhouse and a centerpiece manufacturing hub.

According to Gillem Tulloch, a Hong Kong based analyst with Forensic Asia who has been researching China’s real estate data, he asserts that there is a gross inconsistency in the numbers: A huge oversupply and overvaluation of properties across China.

“It is essentially the modern equivalent of building pyramids. It doesn’t really add to the betterment of lives, but it adds to the growth of GDP. It is basically happening because China is a command economy and the Chinese government can dictate where the resources are spent,” Tulloch said.

Indeed, in a bid to meet GDP growth targets, local governments have been reported to encourage building to earn tax revenue and state-owned banks told to hand out loans to developers.

Other the other hand, China is also able to continue feeding the demand for capital precisely because of its low interest rate payments on household savings.

“If interest rates are low, savers, who are basically the households and ordinary people, earn much less than they should have earned. That is used to subsidize borrowers, who in the case of China, are mostly manufacturers or real estate developers or infrastructure investors,” explains Michael Pettis, professor of finance at Peking University and senior associate at Carnegie endowment.

At the same time, wages in China remain low and developers are treading morally hazardously, creating growth in GDP through unnecessary and low return-on-investment activity. Accountability for the real demand for such residential properties remains a conundrum.

It has been reported that there are an estimated 64 million empty apartments in China and all these indicators seem to point to the fact that the Chinese economic story is unsustainable.

On the basis of conventional metrics, there is little doubt that China is already faced with a property bubble. Price-to-rent and price-to-income ratios are both at the highest levels the world has ever seen.

And the bubble is already affecting the rest of the world. The strong demand by China’s insatiable construction industry has led to sharp rises in the prices of commodities like steel, iron and copper.

Similarly, given that 40 percent of the dry-bulk shipping industry is connected to moving iron ore to China, any slowdown in China’s demand will trigger global crunches that will be felt in major international shipping hubs like Singapore and Norway.

Inevitably, Chinese property markets have a global chain value and many sense that China’s model of government-regulated capitalism is still a long way from being a market economy capable of self-regulation.

A series of cooling-down measures have been deployed, such as increasing the level of required upfront down payment to fifty percent. Yet, in 2010, there were no obvious signs of corrections in China’s real estate market, said Richard Ho, analyst with National Real Estate Industry Leader, Deloitte China. According to China’s National Bureau of Statistics, investment in real estate development in the first quarter of 2011 rose 34 percent, amounting to RMB 884.6 billion.

Many experts have attempted to draw parallels between the looming property market correction in China and the crisis the United States has experienced in recent years.

For the United States, the crisis began with banks issuing “sub-prime” mortgages. Lured by promise of property value appreciation and low-interest rates, borrowers were in fact unable to afford these loans.

When real estate values started going down and mortgage payments were not met, the real estate crisis escalated into a banking crisis and subsequently into a global debt crisis.

Could China then experience a similar U.S.-style financial crisis should housing prices continue their steep climb and then fall sharply?

According to Simon Johnson, professor at the MIT Sloan School of Economics, a reiteration must be made that the U.S. sub-prime crisis was born because it was financed by bad debt.

“The really damaging dynamics when bubbles burst come from high levels of debt. This is manifest in two ways: the people who over-borrow go through various kinds of economic and personal stress; and the banks that lent to them need to cut bank on all other kinds of loans, and may even become insolvent,” Johnson explains.

Unlike in the United States, should the Chinese property market fail and fall through the cracks, losses extending from property market lending are likely to be absorbed and recapitalized by the state, and therefore pose no clear or outright danger of bank insolvency.

China’s market system may not be very efficient at allocating capital, but it is also built to allow the state a freehand at “restructuring” stability. For that reason, we should discount the likelihood of a fall in prices leading to foreclosures, argues Pettis.

But, besides the number-games, many have warned that the biggest impact might not be economical in nature.

Experts such as Professor Zhou Xiaosheng, sociologist at People’s University in Beijing, warn that the rising cost of housing prices out the common man who aspires to afford a home, and such alienation might prove damaging to China’s social fabric.

“What worries me the most is polarization. According to Deng Xiaoping, if it leads to polarization, then our reform has failed. Right now, China is polarized and if it continues to be polarized (in terms of affordability), then that is a big cause for concern,” Zhou said.