Home » What does the UK yuan-denominated bond mean for the dollar?

What does the UK yuan-denominated bond mean for the dollar? 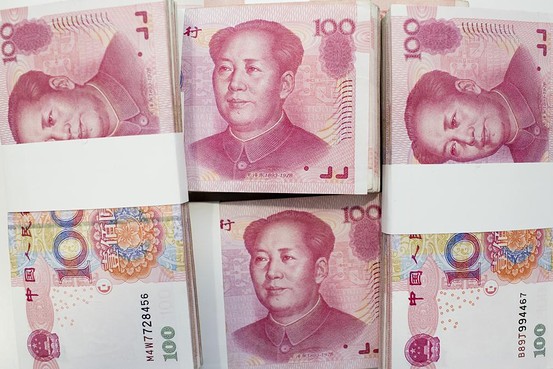 On October 9, the UK announced it was beginning the launch of a yuan-denominated bond, becoming the first sovereign, besides China, to do so.  It is spurring talk that this is the death of the US dollar.

On October 9, the UK announced it was beginning the launch of a yuan-denominated bond, becoming the first sovereign, besides China, to do so.  It is spurring talk that this is the death of the US dollar.

It trumps the fact that the recent official reserve data from the IMF showed the dollar’s share of global reserves edged slightly higher in Q2, but is largely stable above 60% of global reserves.  It doesn’t matter than dollar is consolidating one of its strongest rallies among the major foreign currencies in years.   Is not the UK’s yuan bond sales proof that the Chinese currency has arrived on the world stage, and is truly challenging the dollar for supremacy?

The UK appears to be raising 3 bln yuan (~$490 mln) in a three-year bond that pays about 2.7%. Both Moody’s and S&P blessed it with the highest rating.  A note with a similar maturity, issued by China pays about 2.78%, and is rated two steps lower by Moody’s and three notches lower by S&P.  It will use the proceeds to boost reserves, but given that it has around $142 bln in reserves, it is a minor addition.

Japan may have beaten the UK in being the first G7 central bank to add yuan to its reserves. Japan received permission from China to buy its bonds.  It is believed to have bought no more than a couple hundred million dollars (Japan is the second largest holder of reserves with about $1.26 trillion behind China’s roughly $4 trillion).

The Chinese yuan is a tightly regulated currency.  Late in the 19th century and early 20th century, the Chinese emperor would make “concessions” to the imperialist powers—cities and railroads and assorted rights were given to different European countries.  The US, in its famous Open Door Notes, defended the territorial integrity of China against Europe and Japan carving it up into spheres of influence.

Now the shoe is on the other foot, but it is the same dance.  China is purposely and selectively allowing foreign centers to trade, clear and settle yuan.  As part of this, China provides a currency swap line to the offshore center.  The UK’s yuan-denominated bond is about creating the financial infrastructure.  The bond that the UK is selling will serve as a benchmark off which future issues will be priced.

Frankfurt and Paris may have hoped they would be the main European center for yuan trading, and while the Eurozone is bigger, London’s role as the premier financial center wins out.  Germany trades more with China than the UK, and the Bundesbank secured yuan clearing and settling rights before the UK.  By a few weeks, the UK beat the Eurozone in having direct trade with the yuan, becoming the first European currency to do so.

It is inconceivable that the UK will join EMU, yet it remains a larger center of euro trading than Frankfurt and Paris combined.  There may be some effort, especially on the part of France, to see if it can take away this privilege if the UK were to opt out of the EU.

If the Chinese yuan’s value was set in the open-market, as it is committed to doing under its WTO ascension agreement, this would not be an issue.  However, China is trying to closely manage the internationalization of its currency.  Indeed, the lack of free access to the yuan, and the larger lack of transparency, was key to the MSCI recent refusal to include Chinese shares into its global benchmark indices.

The internationalization of the yuan has largely stood on three legs.  The first is that an increased part of its internal trade (between the mainland and its Special Administrative Region, Hong Kong) has become denominated in yuan. This fact has even distorted, or generated, the much ballyhooed rise of the yuan as the seventh most used currency for payment purposes according to SWIFT (up from 20th place almost three years ago).

Second, it developed an offshore financial center in Hong Kong (Dim Sum), in which mostly, but not only, Chinese government arms, banks, and real estate developers can raise cheaper funds than in the mainland itself.  Maturities rarely go beyond three years, which in part reflects the lack of visibility of future of Dim Sum market.  That said, in recent weeks, yields in the offshore market rose, and the gap with the mainland interest rates has narrowed.

The third leg of the internationalization of the yuan consists of swap lines with a couple of dozen countries.  These swap lines remain pristine in the sense they have not been used.  During the Great Financial Crisis, the major industrialized countries did not intervene in the foreign exchange market.  The main issue was not the price of dollars, but the access to them.

The US dollar was the key funding currency, and as the wholesale funding market and the interbank market were frozen, non-US economic actors could not secure the dollars needed.  This threatened to accelerate a downward spiral of distressed selling of assets, liquidations, and failures.  The swap lines are one of the under-appreciated innovations that helped ease the crisis. Some Chinese officials may have mistakenly confused these swap lines with a new financial architecture, from which it fears it will be excluded.

The swap lines were offered by the US as a way to help stabilize the financial crisis, and made the public good that the US provides, namely the dollar, available.  In this sense the swap lines were a function of the role the dollar played in the global capital markets, not the cause of it.

At the same time, it is still early.  Just like China managed to lift hundreds of millions of people out of poverty without adhering to neo-liberal rules, so too is it finding creative finding ways to further develop yuan capital markets.  This month, the Hong Kong-Shanghai equity link is supposed to open.  It will let accounts in one center buy equities in the other within certain pre-announced daily caps.  The next step may be to allow Chinese citizen to access yuan assets in the UK and Singapore, for example.  It may also facilitate international investing in Chinese companies through a richer global depository receipts (GDR) program.

The UK decision to launch a yuan bond says more about its strategic commitment to being the premier financial center than about the role of the dollar in the world economy.  The $490 mln it is raising is not even a rounding error for its reserves, though it is sufficient to achieve its purposes of creating a benchmark to help the London-based yuan market to broaden and deepen.  There simply may not be enough yuan assets available for foreign investors that could lift the yuan’s share of global reserves to more than a couple percentage points.

Rather than mark some kind of turning point in the history of the dollar, the size of the UK bond, and the fact that it is the first foreign country to issue such a bond, illustrates what a long road lays ahead for the Chinese yuan to truly challenge the dollar.  Chinese officials seem to be more aware of this than many of the authors of the dollar’s eulogy.  China has done well in the international political economy predicated to a large extent on the US dollar.  It often seems as if China and the US want the same thing of each other: Be strong, but not too strong.