Cannabis stocks have had a roller coaster ride over the last year. The sector saw a rerating after Joe Biden’s election as the US president. The rally continued in 2021 as Democrats took control of the Senate.

However, cannabis stocks have fallen sharply from their 2021 highs. The long-term outlook for the sector looks positive though amid hopes that marijuana would eventually be legalized at the federal level in the US. Other countries are also expected to take a favorable approach to marijuana legalization. Here are the five best cannabis stocks that you can buy in September 2021. 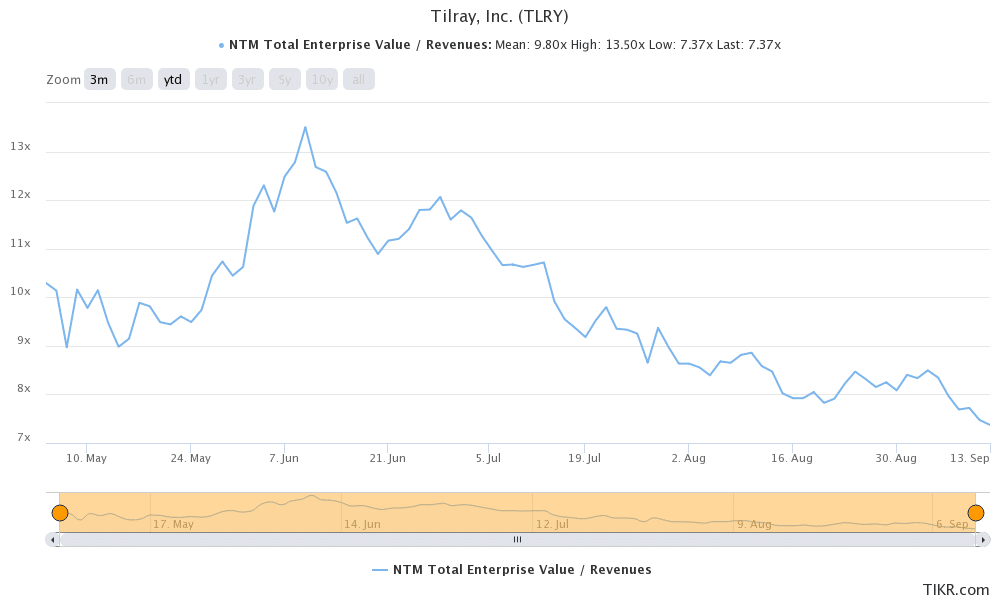 Earlier this year, Tilray and Aphria merged to create a cannabis powerhouse. The combined entity would have geographically diversified operations and has strong exposure to Europe. Also, the merged entity has operations spread across medical and adult-use marijuana. The company is expected to realize massive synergies after the merger. Given its strong globally diversified portfolio, TLRY looks among the best cannabis stocks to buy in September.

After Tilray’s merger with Aphria, Jefferies had issued a bullish note. “For us, when Aphria and Tilray combined, it was the perfect match. In Canada, a leading portfolio of brands, supported [by] an efficient cost structure. In Europe, the market is now picking up, while Tilray’s scale and Aphria’s unique German positioning make it perfectly suited to succeed,” it had said in the note.

Tilray is among the best cannabis stocks to buy

Among other things, the brokerage expressed optimism over the cash on the consolidated company’s balance sheet which it expects, would help it gain an entry into the US marijuana market. Last month, Tilray announced a $165.8 million investment in Medmen which would give it a footprint in the US markets.

After the crash, Tilray now trades at an NTM (next-12 months) EV (enterprise value)-to-sales of only 7.4x which happens to be the lowest since it merged with Aphria. Overall, Tilray ticks on several boxes including post-merger synergies, US expansion, recovery in the Canadian adult-use marijuana market, and Europe expansion. Given the tepid valuations and strong growth outlook, Tilray looks among the best cannabis stocks to buy in September.

Sundial Growers is another good cannabis stock to buy in September 2021. The stock has been under pressure amid the sell-off in marijuana stocks. However, the company capitalized on the rising stock price to raise a lot of cash. It is now investing cash in other cannabis companies. 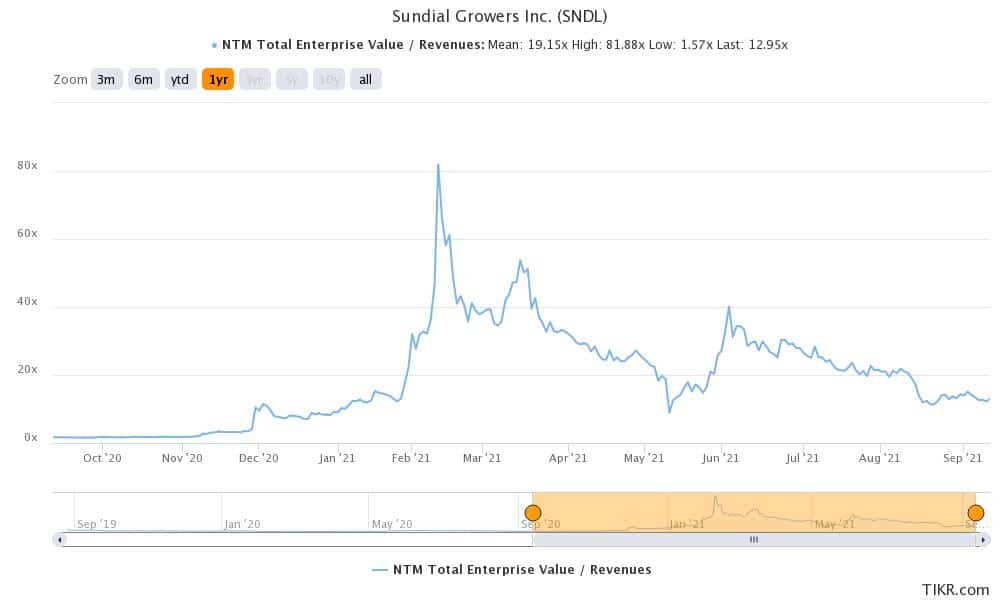 The recent weakness in the marijuana sector could actually be a positive for SNDL. As the macro environment has worsened somewhat for marijuana companies since the first quarter of 2021, they could face difficulty in raising cash. This is where the millions of dollars sitting on SNDL’s balance sheet would come into play. If the management invests the cash wisely, which it has been doing so far, the investments would pay off handsomely in the medium to long term. The company’s cannabis business is also transforming and it has liquidated millions of dollars of obsolete inventory over the last few quarters. SNDL is instead focussing on value-add sales.

Sundial Growers is a penny stock which makes it risky as compared to the larger peers. However, it is among the best cannabis stocks to buy and bet on the turnaround and also play the massive cash on its balance sheet.

Charlotte’s Web Holdings stock has been in a free fall and is down over 40% this year. The company is into cannabidiol (CBD) products and does not sell either medical or recreational use cannabis. The company is the market leader in CBD products whose market size is expected to rise to $20 billion by 2024. 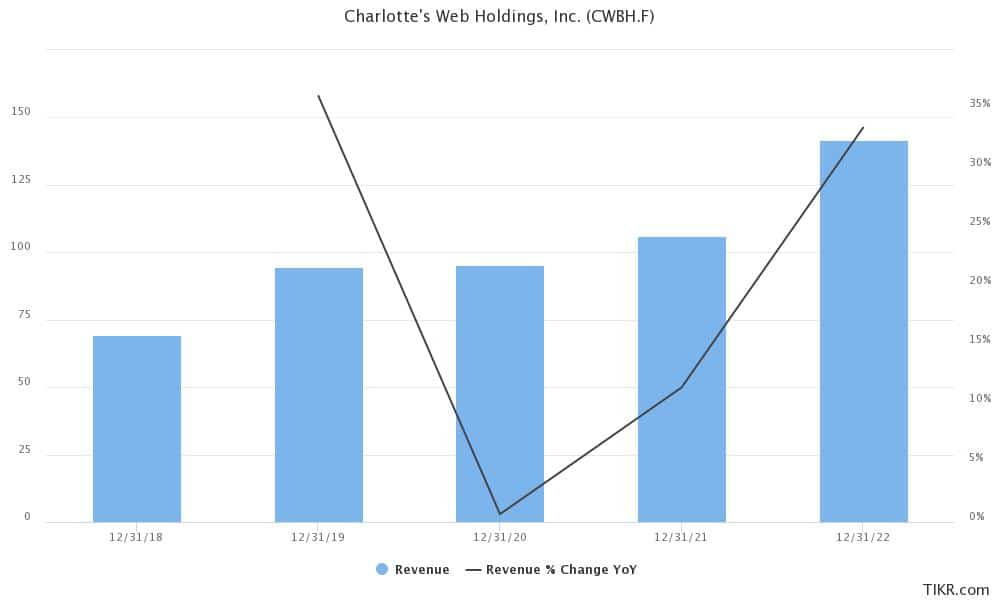 Charlotte’s Web Holdings’ stock has been under pressure and hit a 52-week low yesterday. However, it is among the best cannabis stocks to buy if you want to play the CBD market. The valuations also look reasonable with an NTM EV-to-sales multiple of 2.4x.

Aurora Cannabis stock is down over 30% so far in 2021 amid the sell-off in marijuana stocks. Despite the massive correction, Wall Street analysts don’t look bullish and none of the analysts rate it as a buy. Of the 14 analysts covering the stock, eight have a hold rating while the remaining six rate it as a sell or some equivalent. 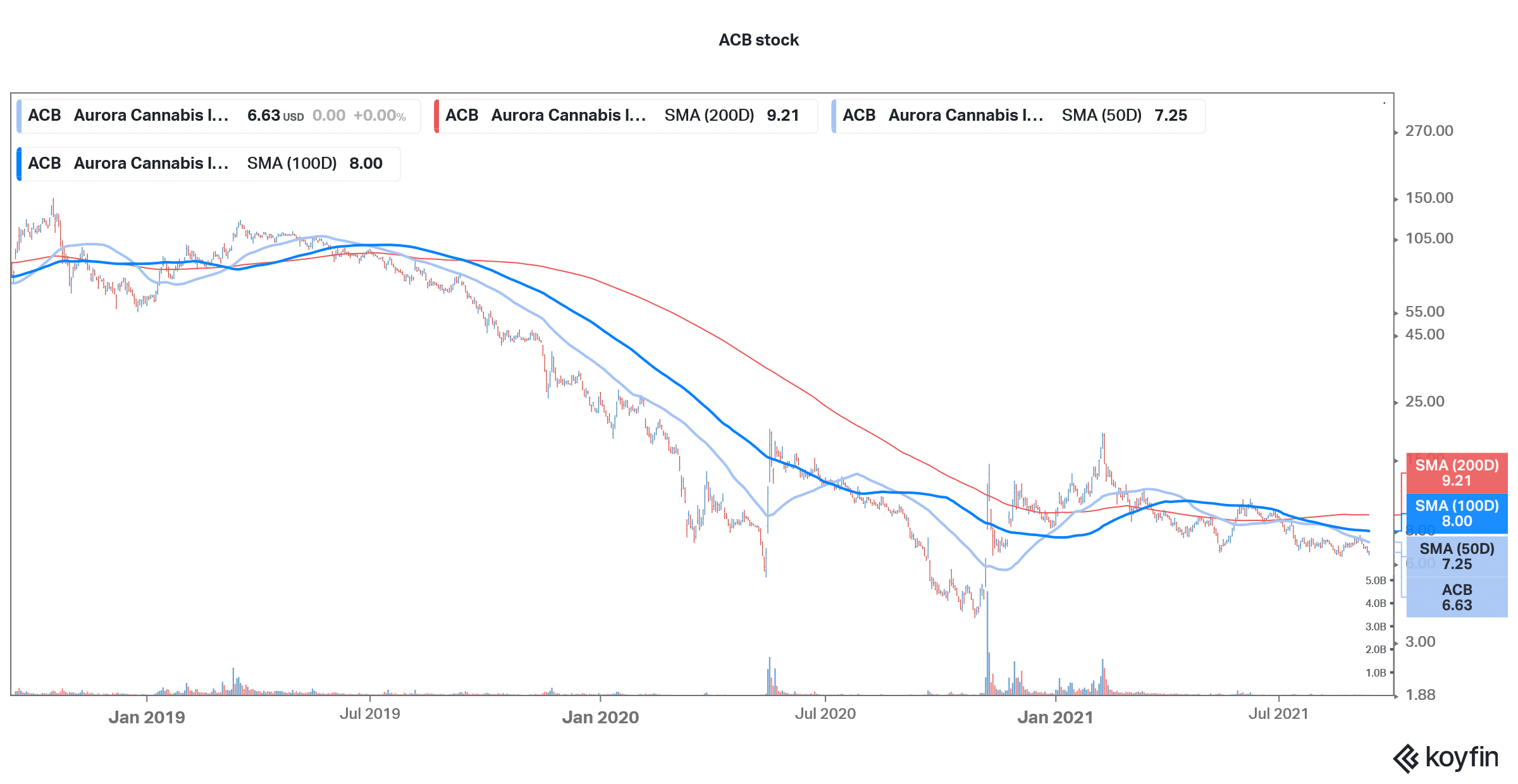 The stock’s median target price of $6.61 is similar to current prices. However, its street-high target price of $9.92 is a premium of almost 50% over current prices. The stock is not looking bullish on the charts either and trades below the 50-day, 100-day, and 200-day SMA. The stock has failed to cross above the 50-day SMA and in July the 50-day SMA had fallen below the 200-day SMA, which is a bearish indicator known as a death cross.

However, the stock’s valuations have also come down amid the fall and it now trades at an NTM EV-to-sales multiple of 6.3x which looks reasonable. Overall, while ACB stock has been out of favor with analysts as well as investors, it could rebound once the cannabis market sentiments rebound. It is among the best cannabis stocks to buy in September and bet on a revival in the beaten-down sector.

Curaleaf stock is down 13.7% in 2021. The company is the largest cannabis company after its acquisition of EMMAC Life Sciences. Analysts are bullish on this cannabis stock and all the nine analysts polled by TipRanks rate it as a buy or some equivalent. Its average target price of $22.78 implies a potential upside of over 104%. 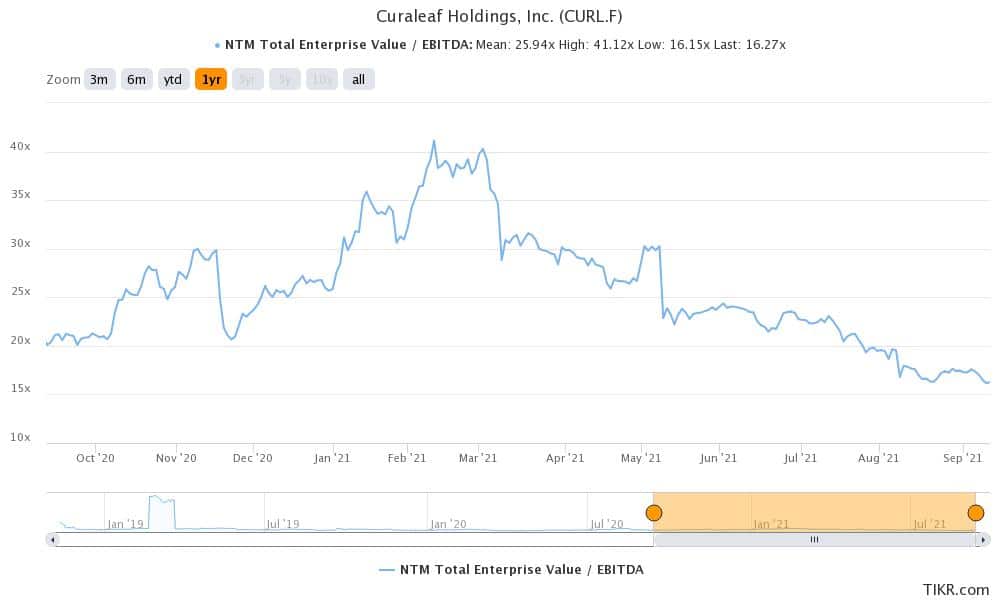 CURLF is a good cannabis stock with strong financials

Curaleaf’s financials are much better than most other marijuana companies. The company is positive on the EBITDA level and analysts expect its adjusted EBITDA to rise to $369 million in 2021. The EBITDA is expected to rise further to $624 million in 2022.

The marijuana industry has been marred by perennial losses. CURLF looks like an island in an otherwise red sea. The stock trades at an NTM EV-to-EBITDA multiple of 16.3x which looks very attractive. If you are looking at a financially strong cannabis stock with a strong growth outlook and attractive valuation, Curaleaf looks a good stock to buy.