Maybe Wage Inflation is the Answer? 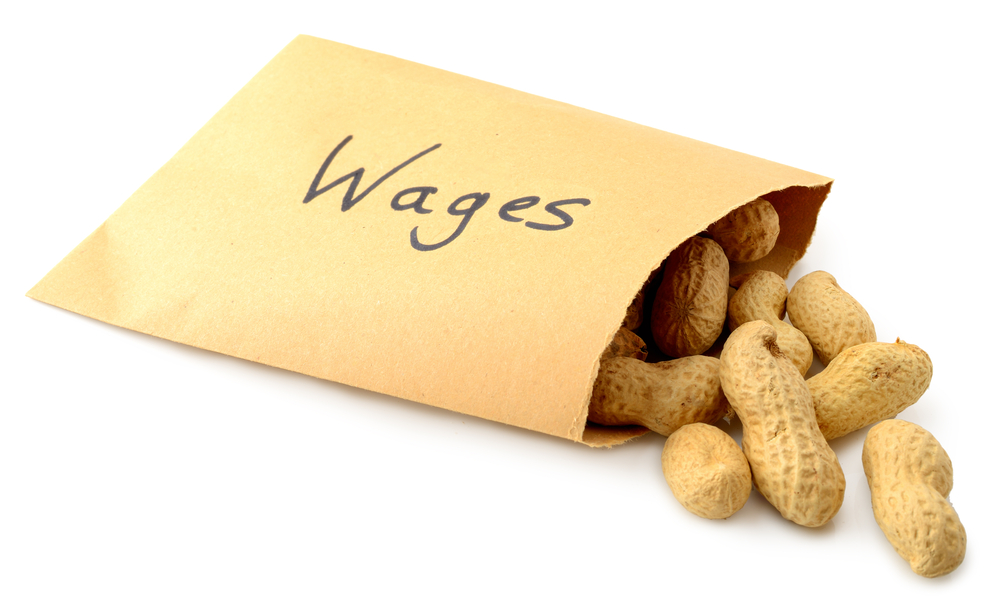 Even the speed of light is not a constant.  It has been slowed under certain conditions.  Surely, there must be something that is hard and fast.  Ah, interest rates cannot go below zero.  Errr, well, that has been proven to be wrong.  In fact, according to the Financial Times, as of mid-August, there were around $13.4 trillion of bonds (mostly government but some corporate debt too) with yields below zero.

One thing you can count on is that central banks will take the side of employers in wage contests with employees.  Wage growth was understood as inflationary, and inflation was recognized as the chief threat to financial and economic stability.  This too has changed.

Conventional wisdom holds that insufficient aggregate demand is deterring investment, which is understood to be a major factor restraining productivity growth. Further, it is recognized that restrained wage growth is depressing aggregate demand.  Of course, in countries with high unemployment, this should be expected. However, unemployment levels in the US, Japan, Germany and the UK are in the area that economists generally identify as full employment and wage growth is subdued.

The Federal Reserve, the Bank of Japan, the Bundesbank (yes!), and the ECB have either advocated or indicated it would welcome stronger wage growth.  This push seems to be most strongly expressed in Japan where deflationary forces are still evident.  If the government and central bank’s encouraging higher wage settlements is not sufficiently bewildering, consider press reports quoting the IMF’s mission chief in Japan calling on the government to take stronger measures to boost wages.

How is this to be achieved?  Moral suasion, tax breaks, and at least resort, penalties can be assigned. Kozo Yamamoto, an Abe adviser who recently joined the cabinet, suggests that maybe all the ministries should have a wage target policy.

Can it work?  There is precedent.  As one of the reforms associated with the third arrow of Abenomics was independent directors on corporate boards.  This has been a fairly successful campaign, in part because the government has created ETFs, which the BOJ is buying of companies that adopt such best practices.

Japan had adopted a “comply or explain” approach that can be used to induce higher wages.  Companies would have either to voluntarily adhere to such guidelines or publicly explain why not.  Economists and/or policymakers appear to know how much wage growth is desired.  Some have proposed a 3% pay increase in Japan.

Two former members of the Bank of England’s Monetary Policy Committee, and now professors in the US and working at the Peterson Institute for International Economics, Posen and Blanchflower, advocate a corporatist solution of coordination between unions, firms, and the central bank.  Praet at the European Central Bank argues that average wage increases should be in line with the ECB’s inflation target.

Governments are doing some things too.  Germany recently introduced a minimum wage.  In Japan, Abe intends on raising the minimum wage from JPY798 to JPY1000 by 2020.  In the US, many local governments and states have increased minimum wages well above the Federal minimum wage of $7.25.  Posen and Blanchflower argue that the Federal Reserve should add wage inflation as an additional intermediate target of monetary policy.

Wow.  Central bankers and many governments have been encouraging higher wages.  Is this proof that left-wing socialists have taken over?  Hardly.  In fact, conservatism of officials and commentators likely means these efforts will not succeed.  Labor unions in Germany, especially, in the public sector and chemical industry have secured above inflation levels of wage increases, but this has not changed things.  Germany continues to export 40% of what it produces, borrowing taking the aggregate demand generated elsewhere.  For a couple of years, the Abe government has been encouraging Japanese businesses to share some of their record high profits with workers to little avail.

Those advocating higher wages are not yet willing to do everything that is takes to ensure success because they still appear to be confined by ideological shackles.  Few are contemplating strengthening precisely through institutions whose raison d’etre is boosting wages, namely trade unions.

During the Great Depression in the US, FDR did help strengthen unions and facilitate mobilization.  Despite the platitudes about the development of a new playbook after the Great Financial Crisis, few are ready to embrace the FDR’s policies 70-year old policies.

For the last third of a century, organized labor has been gutted.  The liberation of the capital markets ushered in by Reagan and Thatcher, was predicated on the defeat of the US and UK labor movements.  This was the answer to the stagflation of the early-1970s and the falling rate of profit: Break the back of organized labor, introduce greater flexibility, and allow capital grab a greater share of productivity gain.

Capital took an unprecedented share of the national income.  Aggregate demand was made effective through the extension of credit, and we know how that story ends.  Capital took such a great share of national income that it is choking on it.  It does not know what to do with it.

Corporations in the US, Europe, Japan, and China are sitting with unprecedented levels of cash on their balance sheets.  They are plowed money back to buy their own shares, increase shareholder dividends, finance large mergers and acquisitions, which typically are unwound in carve out and spin-offs, with a loss of good will, in the next cycle.

Many of those advocating higher wages want it as another concession from the state.  Businesses pay unlivable wages, so the state offers transfer payments, which are the fastest growing component of household income in the US even before the Great Financial Crisis.

Approximately 52 mln Americans (more than one in five) receive means tested government assistance.  In comparison, in 2004, the figure was closer to 42 mln.  Making employees pay for their wage increases via tax incentives for businesses shows the conservative nature of the official push for higher wages.

At very end of their essay for the Peterson Institute, arguing for the Fed to adopt wage growth as an intermediate target, Posen and Blanchflower acknowledge that higher wages may not fuel an increase in inflation.  It is possible, they concede, that wages can rise without inflation if labor’s share of national income rises.

They also recognize that labor’s share of US national income is historically low.  Posen and Blanchflower suggest it is easier and more transparent for the Fed to judge whether an increase in labor’s share of income is out of line with historic norms and its causes, rather than focus on the elusive concept of NAIRU (non-accelerating inflation rate of unemployment).

While this claim may be true, what Posen and Blanchflower, in effect are proposing, is that just as the class struggle intensifies over the distribution of the social product (national income), the central bank, which is insulated from the vagaries of representative government, can be stronger referees.  Ultimately, what Posen and Blanchflower are interested in is not a society with less income and wealth disparity, or boosting aggregate demand.  They are interested in boosting inflation.

Posen and Blanchflower show that below the seemingly radical idea of boosting wages lay a conservative effort to ease the intensifying struggle over distribution by lifting inflation.  If everyone’s share of the pie appears bigger than the fight over its distribution can be de-politicized.  The targeting of nominal GDP (NGDP), which appears to be gaining traction and we may hear more about it from Jackson Hole next week, is more of the same.

The aim to boost prices as if this can make up for the historically extreme disparity of wealth and income that limits the growth of aggregate demand, and serves as the breeding ground of populist political movements, which often appeal our baser instincts.  Many of the advocates of higher wages want to achieve this without strengthening labor or helping it secure a large share of national income.

Perhaps we do have something certain after all.  They can’t have their cake and eat it too.

The Need for Higher Wages: Lots of Thunder, No Rain is republished with permission from Marc to Market