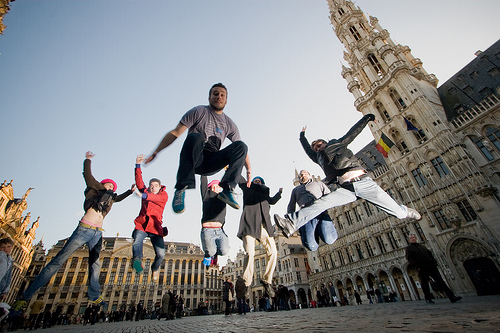 It has been 15 months since Belgium last had a government. More than 450 days later, Belgian politics remain stuck in a gridlock after election results meant that no single party received more than 17.4 percent of seats in the Belgian Chamber of Representatives and 19.61 percent in the Belgian Senate.

Thus far, efforts to form a coalition government have been fruitless. A caretaker cabinet, led by Yves Leterme, is currently in charge of the routine business of running the country; but they have little to no legislative or executive power to enact national policies.

“Technically this can last until the next federal election has to be called in 2014,” said political scientist Dave Sinardet to the BBC.

[quote]”Let’s say we have elections in 2014 and we have some problem forming a coalition, this caretaker government could still go on after that. As long as it commands a majority in parliament, the only obstacle to it continuing would be the fear of absurdity.”[/quote]

Belgian officials however appear to care less. Since the elections, 10 politicians have tried to negotiate a new government and none have succeeded. Francophone socialist Elio Di Rupo is the latest to give it a go, though the negotiations have reached another standstill, with The Associated Press reporting that Green Party negotiator Jean-Michel Javaux – also the mayor of Amay, a small eastern town – had to attend a town meeting to vote on, among other things, a new police car and a computer, while Yves Leterme is now on a visit to Israel.

In addition, Bart de Wever and his New Flemish Alliance party – the biggest winner in the 2010 elections – appear set on an “orderly breakup” of Belgium and would rather see coalition talks fall on the wayside.

“The worse things are in those talks, the better it is for the New Flemish Alliance,” said de Wever to the RTBf public broadcaster.

To an outside observer, the political situation in Belgium may sound absurd – laughable even – but perhaps the biggest joke of all has come in the wake of the latest quarterly GDP results released by the European Commission’s Eurostat Press Office.

In the last quarter, the Belgian economy has actually grown faster than that of a number of its neighbours including the UK, Germany, France, Italy, Spain, The Netherlands, Finland, and Switzerland. Belgium’s 0.7 percent GDP growth was also higher than the euro zone’s average of 0.2 percent.

Part of the reason for this, according to The Financial Times, is that “in the absence of political leadership, Belgium has been among the few European countries not to enact meaningful austerity measures.”

John Lanchester, writing for the London Review of Books, also slammed the austerity fever that was gripping Europe.

[quote]“It turns out that from the economic point of view, in the current crisis, no government is better than any government – any existing government.

“No government means none of the stuff all the other governments are doing: no cuts and no ‘austerity’ packages. In the absence of anyone with a mandate to slash and burn, Belgian public sector spending is puttering along much as it always was; hence the continuing growth of their economy.”[/quote]

To be fair, the Belgian economy also benefited from the fact that many of the country’s salaries, pensions, and unemployment benefits were automatically indexed to inflation. When oil prices rose earlier this year, consumer spending also increased substantially, which in turn provided a boost to the economy.

Still, it was a stroke of fortune that the political paralysis in Belgium somehow managed to inadvertently provide the country with a shield from austerity measures. While the rest of Europe succumbed to political pressure for aggressive spending cuts, the Belgian caretaker cabinet remained oblivious to the European Union’s call for austerity.

Belgium is “an interesting laboratory on the pertinence of another economic policy,” said Jean-Luc De Meulemeester, a professor at the Solvay Brussels School of Economics & Science Po Bruxelles, to the Slovak Daily Pravda.

[quote]“Belgium remains (comparative to other European countries) more or less a social-market economy, with an important tax rate on labour, lifelong unemployment benefits, automatic wage-indexation, reduced inequalities… It did not implement a radical shift from the Keynesian philosophy of supporting internal demand (even if changes have been operated since the 80s – and especially during the 90s the ratio debt/GDP has been decreased from 135 to under 90 percent before 2007).”[/quote]

It is a compelling case for Libertarians who continually argue for a minimal role for the state. However, the lack of a government, while beneficial in the short-run, could spell trouble in the long-term. Belgium’s high debt to GDP ratio will inevitably attract the attention of speculators the longer it takes for a government to be established. Furthermore, the country is also likely to face higher borrowing costs from nervous investors. Down the line, Belgium will also encounter sustainability issues for any long-term social and economic policies.

Marco Martiniello, a politics lecturer at the University of Liège, warned that “the delays (to form a new government) will distance people from politics.”

[quote]“This will have a negative impact on democracy and reinforce the gap between government and citizens. I already see a growing sense of apathy amongst my students.”[/quote]

As such, the relative success of the Belgian economy should not be seen as the result of a deficient government. Rather, one could possibly label it as a triumph of Keynes over Hayek.

Joseph Stiglitz, for example, has been adamant that the cost-cutting and austerity measures adopted by many European nations have had an adverse effect on the economy.

[quote]“The financial markets and right-wing economists have gotten the problem exactly backwards: They believe that austerity produces confidence, and that confidence will produce growth. But austerity undermines growth, worsening the government’s fiscal position, or at least yielding less improvement than austerity’s advocates promise. On both counts, confidence is undermined, and a downward spiral is set in motion.”[/quote]

Still, one can enjoy the irony of the situation. As PIMCO’s CEO Mohamed El-Erian pointed out in an interview with Bloomberg, “policy makers in both the US and Europe have been distressingly missing in action.”

So maybe Belgium really isn’t missing out on anything after all.