Coinbase (COIN) stock was trading higher in US premarket price action today after the company released its second-quarter earnings. The stock has rebounded from its lows even as it still trades way below the 52-week highs. What’s the forecast for Coinbase stock and should you buy the stock now?

COIN had a decent listing and it went on to hit a high of $429.54. However, the stock plunged thereafter and hit a record low of $208 amid the crash in cryptocurrencies. China’s crackdown on cryptocurrency mining and trading led to a sell-off in digital assets and the repercussions were also visible in Coinbase. 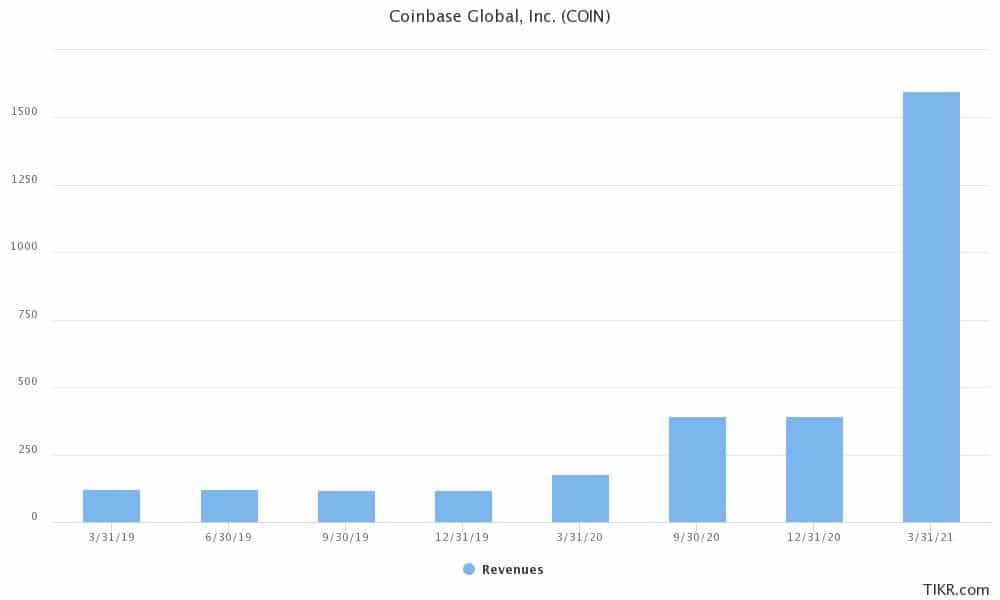 Coinbase has added 29 new assets for trading in 2021. It now supports 83 digital assets for trading and 142 for custody. “The addition of more assets is helping to drive diversification in the assets our customers are transacting in,” it said in its release.

Coinbase provided various scenarios for its outlook. The company saw lower volumes in July. While things have improved in August it said that trading volumes and MTUs in the third quarter will be lower than what it reported in the second quarter. For the full year 2021, it said that at the upper end, it would have an average MTU of 8 million. The guidance at the midpoint is 7 million while it sees MTUs at 5.5 million at the lower end. All these forecasts are built on different assumptions.

However, while proving the guidance it cautioned “It is important for investors to remember that our business is inherently unpredictable. MTUs, Trading Volume, and therefore transaction revenue can fluctuate, potentially materially, with crypto asset prices and crypto asset volatility. As a result, revenue is difficult to forecast.” 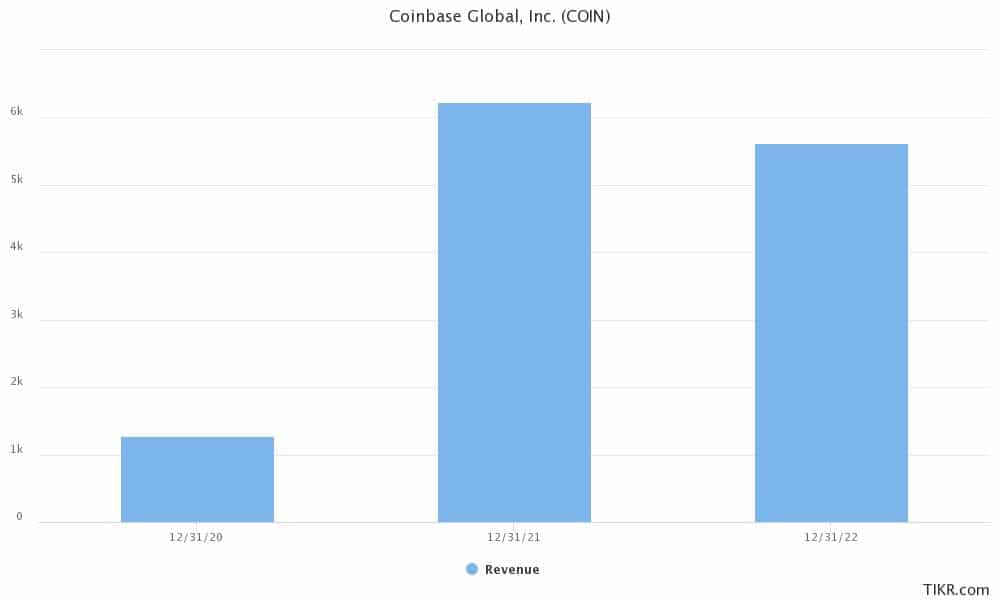 Last month, Mizuho had lowered COIN’s target price from $225 to $210 citing concerns over third quarter volumes. “Despite the mini bitcoin rally to $40K earlier this week, our analysis of actual July volumes shows that activity remains subdued thus far in 3Q,” it said in its release. Several other brokerages have been warning that the surge that Coinbase saw in the first half is not sustainable in the second half and beyond.

Over the long term, the higher fees charged by Coinbase are not sustainable. There is bound to be more competition even as the trading volumes are also expected to rise on higher adoption. Analysts expect the company’s revenues and profits to fall in 2022. However, higher engagement on the platform and the addition of new digital assets on the platform will help the company offset some of the revenue loss from lower fees.

Oppenheimer analyst Owen Lau is bullish on Coin stock and has a $444 target price on the cryptocurrency exchange. “After adding Dogecoin, Polkadot, and others, Coinbase should gradually reduce its reliance on Bitcoin. We continue to see a sharp dislocation between Coinbase’s fundamentals and its valuation and believe the current price offers an attractive entry point for long-term investors,” he said in his note. 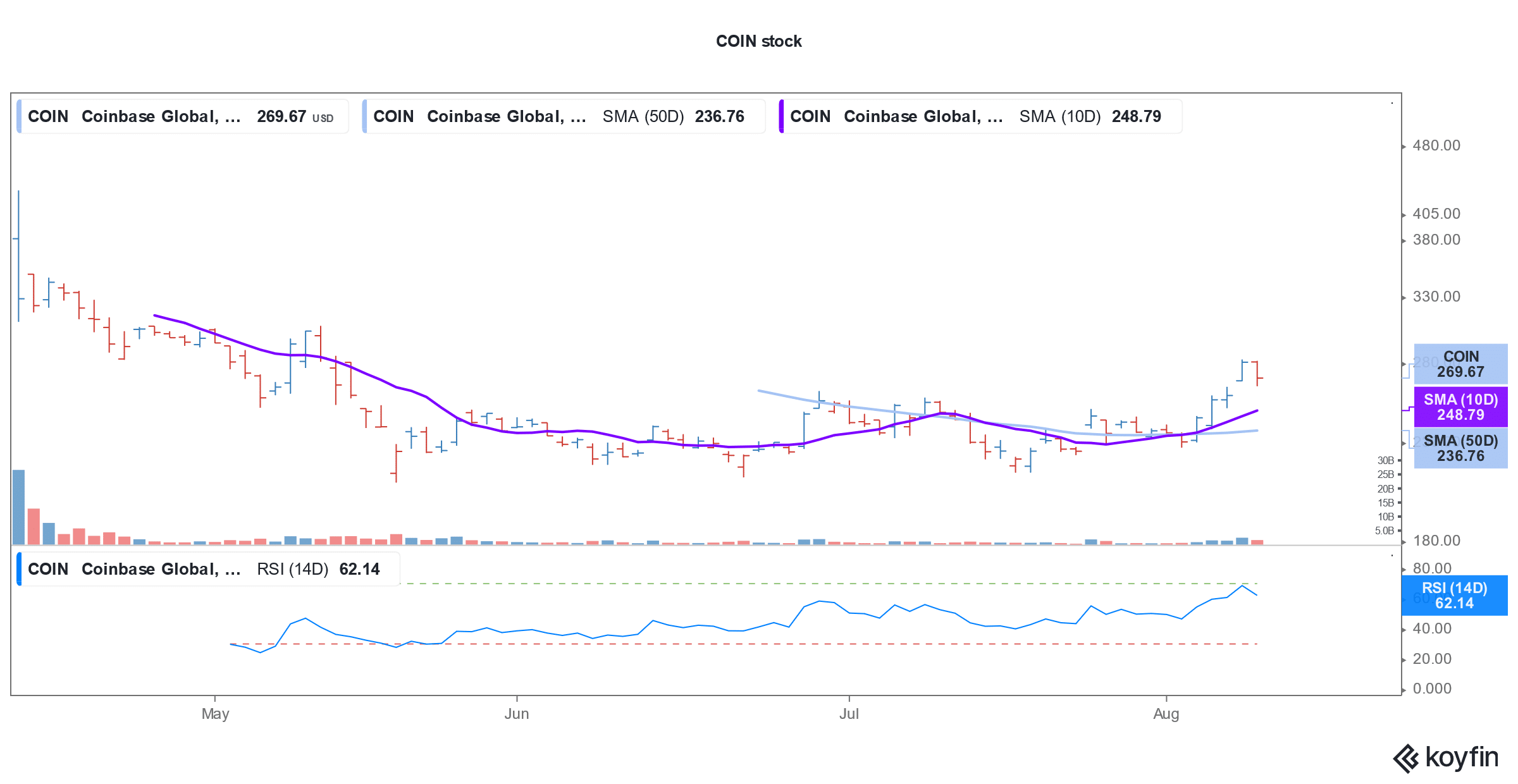 Coinbase has a market capitalization of around $56 billion while analysts expect the company’s revenues to rise five-fold in 2021 to $6.2 billion. This implies a 2021 price-to-sales multiple of around 9x. The company has a high net profit margin ratio and analysts expect the crypto exchange to report a net income of $2.25 billion in 2021 which gives us a 2021 PE multiple of just around 25x. Analysts have downwardly revised the company’s earnings estimates over the last month.

Coinbase stock is looking good on the charts and has found strong support at the 50-day SMA (simple moving average). COIN stock is a proxy way to play the cryptocurrency theme and looks like a good buy at these levels.