Senegal is a lower income country comes under the Sub Saharan African region as to the classification made by the World Bank on the basis of income and region for the year 2006. 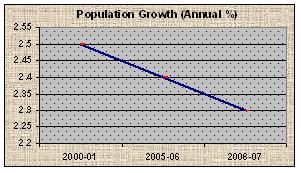 Life expectancy years of the country as in 2004 have reached at 56.1. The infant mortality rate per 1,000 life births was at 77.6 in the same year. The adult literacy rate, that is the percentage of peoples in the age of 15 and above have reached at 39.3.

The Gross National Income of the country in terms of current US $ in 2004 has reached at 6.9 billions with a percapita GNI of 600.0 in current US $. The following diagram shows the annual percentage growth rate of Gross Domestic product over years. 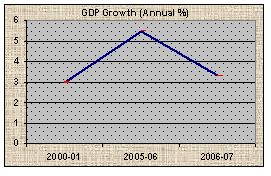