Bulgaria is located in south Eastern Europe and borders five countries: Romania, Serbia, Macedonia, Greece and Turkey. Its eastern border extends into the Black Sea. Bulgaria has an area of 110,994 square kilometers and is a mountainous land. Bulgaria’s economy is an open free market, with a large and advanced private sector. Critical and strategic industries are owned by the state.

The World Bank classifies the Bulgarian economy as an upper middle income economy. The country’s economy has registered steady growth in the recent past, although it still remains one of the least developed countries in Europe.

Bulgaria economy has experienced growth in excess of 6% from 1996 to 2008. This growth has been helped by foreign direct investment. However, the latest onslaught of recession left the economy asking for more as exports and capital inflows decreased significantly.

The GDP in 2009 contracted around 5%. The table below depicts what the real growth rate looks like: 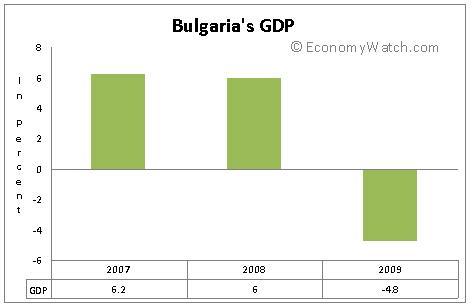 In terms of employment, services provided the maximum absorption, followed by industry and agriculture. The figure below shows the workforce absorption by the various sectors: 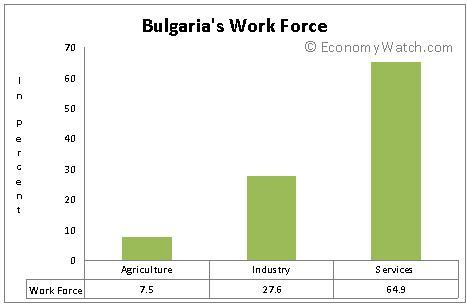 The total work force in Bulgaria is 2.63 million according to the 2009 estimates, around 9.1% of whom were unemployed (2009). Nearly 14.1% of the population lives under the poverty line, worsened by the corrupt public administration, weak judiciary and presence of organized crime.