Belarus is a landlocked country in Europe and was once a part of the USSR. Russia is still its closest ally, contributing more than 50% of Belarus’ trade. Most of the 9.85 million strong population stays around Minsk and other regional capitals.

Belarus has rich deposits of peat and small quantities of oil and natural gas. Most of the Belarus economy is state controlled. More than 51.2% of the population is employed by state run industries.

According to the World Bank classification, the Belarus economy falls in the lower middle income category. Therefore, in order to grow, a number of private companies have been renationalized and intervention from the state in the economic machinery has become a regular exercise. Through such administrative as well as operational changes, Belarus’ economy is geared towards industrial production (mostly in machinery and metallurgy).

The benefits have been noticed in the GDP as well, which soared by 10% in 2008. Following the recession and under the IMF guidelines, Belarus has devalued its currency and tightened its fiscal and monetary policies. With devaluation, Belarus’ economy suffered a deficit of about 2% of the GDP.

According to the 2009 estimates, the GDP (purchase power parity) was estimated at US$111.9 billion, which put Belarus in the 63rd position in the world. Although the GDP was slightly lower than the previous US$115.7 billion in 2008, the country still managed to perform well under turbulent conditions.

This is how the GDP contribution by sector looks like (2009 est.): 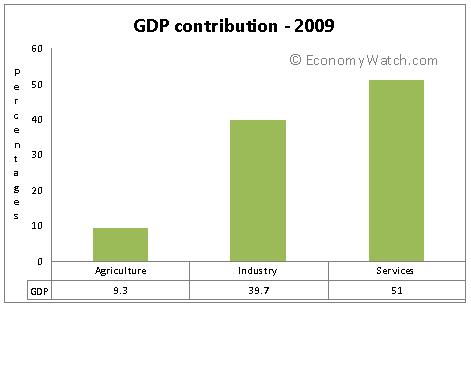 Unemployment rate hovers at around 1.6% and services remain the sector that employs the maximum people.

On the budget front, Belarus’ economy has suffered from a slight fall in revenues to US$16.15 billion and expenditure at US$16.9 billion (2009 est.) Inflation is another issue, as the government is known to mint more money than required. As per the 2009 estimates, the inflation was pretty high at 12.5%.

The country has a population of 9.85 million and a median age of 38.6 years, contributing to the young work force, which can help the Belarus economy grow at a faster rate. However, one issue that troubles the economy is the decreasing birth rate, which was -0.378% in 2009.