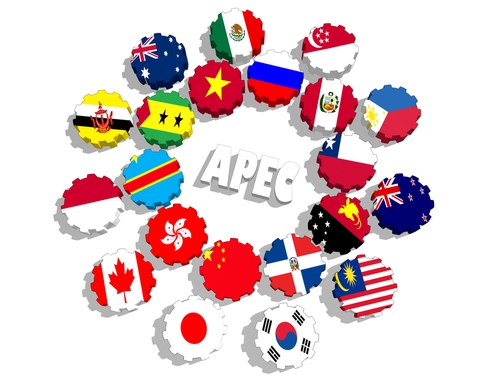 Regional economic cooperation in Asia and across the Pacific was developed around the idea of open regionalism and building the capacity for regional development in the global, multilateral trading system. Global institutions — the GATT and then the WTO — underpinned Asia’s confidence in deeper integration into the international economy and successful trade and industrial transformation through trade, economic reform and multilateral or unilateral liberalisation.

Regional economic cooperation in Asia and across the Pacific was developed around the idea of open regionalism and building the capacity for regional development in the global, multilateral trading system. Global institutions — the GATT and then the WTO — underpinned Asia’s confidence in deeper integration into the international economy and successful trade and industrial transformation through trade, economic reform and multilateral or unilateral liberalisation. No countries collectively have more at stake in global institutions for their economic and political security than the countries of the Asia Pacific region.

APEC was built upon the idea of open regionalism and reliance on the global trade rules to secure Asia’s future development in the international economy. The APEC summit, which takes place just outside Beijing next week, is still the primary forum for doing that. The wishful thinkers reckon the more recently established East Asia Summit (EAS) might serve that role. As yet, it plays no such role. The EAS is a political construct which involves the United States and Russia, that has little economic substance to it and nor is it likely to.

The economic business in the ASEAN plus arrangements is done elsewhere: in ASEAN plus three (with ASEAN’s Northeast Asian partners) and ASEAN plus six (which includes Australia, New Zealand and India). Indeed, precisely because APEC is still the primary regional economic forum it plays a more effective stabilising role politically, as it hopefully will through the meeting between Japanese prime minister Shinzo Abe and Chinese president Xi Jinping around the edges of the summit this week.

The East Asian Summit, on the other hand, has been a theatre for political prancing, and does not have a strong record of stabilising regional political affairs thus far, because it is absent the foundations of economic cooperation.

Our lead essay this week by Paul Hubbard, underlines the centrality of economics to the region’s geo-political future. It contains advice that the head diplomats, especially in small and middle powers like Australia, South Korea and even Japan, might take to heart pronto. It is not advice about how to roll over in front of the real economic power. It is about working together to engage with the emerging powers in order to protect and shape the global economic rules and institutions in their own best interests to preserve the political economy that underpins their political as well as economic security. How miserably they have failed to take these calculations into account in their handling of the Chinese Asian Infrastructure Investment Bank proposal over the past weeks.

As Hubbard argues: ‘Projections of China’s growth are predicated on the continual evolution and reform of its economy — something China has done consistently since 1976. But the next step of opening the capital account is China’s most risky, far more ambitious than shifting workers from agriculture to industry … It’s hard to over-state Australia’s [and the rest of the region’s] interest in this transition’s being a success. We should be rushing to help, making best use of some key advantages. Any gain to Australian businesses from having an inside running would be almost nothing compared to our strategic interests in a China fully integrating into world capital markets’.

The onset of the Asian financial crisis in the late 1990s was the first warning that Asia’s growth was stretching the regional and international economic system and could, no longer, be managed within established frameworks and policy strategy paradigms. Never-ending export-oriented growth combined with more and more openness to international capital movement tested the premises of a policy regime that could not deliver macro-economic policy stability without exchange rate flexibility, for example. The crisis, in turn, tested confidence in Washington as the anchor of the regional economic order. Washington is still under that test.

Meanwhile the reforms that accompanied accession to the WTO fuelled Chinese domestic and as well as regional growth (including that in Japan), delivering the third great wave of Asian economic growth at the same time as there was drift in national strategies and regional diplomacy elsewhere with a focus on mickey mouse bilateral deals.

Nowhere is the tussle of intentions and strategies playing out more clearly, and with more problematic consequences, than in the current attempts to put in place a new set of trade and economic rules — that go beyond the established global WTO trade rules — across Asia and the Pacific.

The locus of this tussle is an economic and geopolitical contest between the Trans-Pacific Partnership (TPP), ordered around the United States and its agenda for economic engagement with Asia but excluding China, and the Regional Comprehensive Economic Partnership (RCEP), ordered around the ASEAN plus trade arrangements and China’s interest in regional integration but excluding the United States. How these arrangements evolve over time will greatly shape the structure of the Asia Pacific economy in the years ahead, and also the politics of the relationship between the United States and China.

Asia is at a strategic turning point where many of its major economies need to embrace or reboot deep economic reform to sustain their high growth potential — reflected in China’s Third Plenum reform commitments; India’s opening up under Modi; Indonesia’s and ASEAN’s commitment to the ASEAN Economic Community; and Japan’s delivery of the third arrow of Abenomics.

This alternative conception of Asian economic cooperation may serve better to secure both regional prosperity and stability, as well as, because of its inclusiveness, play a positive role in buttressing the global trade and economic system.