Home » Sorry Dr Friedman, You Are Wrong – the Middle East Has Fundamentally Changed

Sorry Dr Friedman, You Are Wrong – the Middle East Has Fundamentally Changed 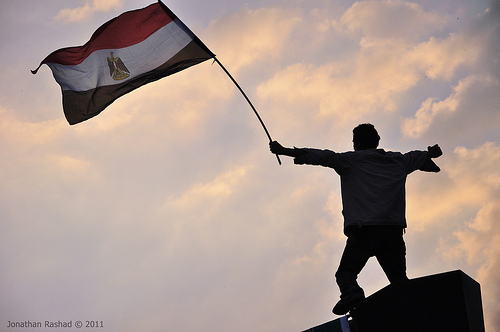 Forty one years ago, I was born in a dusty hospital in Basra, southern Iraq.

Thirty two years ago, as a nine year old boy, I looked through the back window of a taxi cab, thinking, ‘I may never see these streets that I love again.’ Like millions of others, as Saddam ‘arrived’ we left, and true enough I haven’t been back since. Bye bye Basra.

Now here I sit, all these years later, on the other side of the world, with Saddam dead and buried close to five years already.

Forty one years ago, I was born in a dusty hospital in Basra, southern Iraq.

Thirty two years ago, as a nine year old boy, I looked through the back window of a taxi cab, thinking, ‘I may never see these streets that I love again.’ Like millions of others, as Saddam ‘arrived’ we left, and true enough I haven’t been back since. Bye bye Basra.

Now here I sit, all these years later, on the other side of the world, with Saddam dead and buried close to five years already.

And yet, that old specter of fear still haunts me. I still worry. Should I really write this article? Might it come back to haunt me or – worst still – my family one day?

Unless you have lived under a repressive regime, it is very hard to understand the profound psychological impact it has. It is something that never truly leaves you.

It’s not even about voicing opposition to the regime.

Sometimes just for fun, people could be randomly taken away, beaten, electrocuted, burned, humiliated, dismembered and killed – accused of something, or accused of nothing at all.

They might disappear for years, or their family might be told to come and collect the body – and pay for the bullets used to execute them.

Whole countries have been turned into prisons in which no-one is safe and no-one can be trusted. As many as one third of Iraqis at some time or other provided information about friends, families or colleagues to the authorities. To a lesser or greater extent this has happened in most of the Middle East.

That is why I am amazed to see hundreds of thousands of Arabs, Kurds, Berbers and a multitude of other races decide that they will stand up to the Mafiosi that have come to control every aspect of their lives.

That is why I am amazed to read stories like that of Adnan; being tortured by the Syrian authorities didn’t induce fear, it induced anger, and that anger is bringing even more people out to the streets (’This Regime is Brutal but also Stupid’).

The most remarkable thing is not that these kids are risking their lives, standing up to bullets and tanks.

As incredible as that is, something even more profound happened first.

The citizens of the Middle East escaped from the mental ghetto that they have been consigned to, that they might have unwittingly consigned themselves to. They overcame fear and despair, and had developed the real audacity of hope. (The real thing is even better than the slogan, Mr President.

That is the true and fundamental change that has happened in the Middle East.

The mentality has changed. And as that persists through all the thuggery thrown at it, so the Arab world will never be the same again.

That is why I fundamentally disagree with Dr George Friedman, the CEO of Stratfor.com and an analyst that I admire and have learnt a great deal from.

In his Agenda on the Middle East of the 29 April 2011, George explains that geo-politically, nothing has really changed (with my emphasis):

[quote]Egypt has moved from a period of demonstrations to a fairly stable situation with the old regime in power. Tunisia has settled down; of course Libya has not. When you look at the Persian Gulf there is the potential for instability, but actually you have a fairly stable situation now. At this moment you have a great deal of instability in Syria, but it’s not clear which way the army is going to go so you don’t know how unstable it is. There’s a kind of perception of massive instability, but I’m always struck by how little has actually changed of substance.

But again I want to emphasize that, and this really makes my view somewhat different from those of many other people, is that we’ve had a lot of sound and fury. I’m not saying it signifies nothing, but I’m saying it is less significant than some have wanted to say. People have talked about how an enormous democratic revolution is sweeping the region. Certainly there have been demonstrations. Demonstrations don’t constitute revolutions. Revolutions don’t always constitute democracy and so on. So when you take a look at what’s happened in the region, sometimes there’s less there than meets the eye.[/quote]

George, I agree with you that there is no ‘enormous democratic revolution’ sweeping the revolution. Media outlets have to hype things up to make money. I get that.

But I think you have missed the real action.

The deeper truth is that people’s hearts and minds have changed.

If you remember the rhetoric that accompanied the start of the most recent Gulf War (more accurately described, I think, as the Invasion of Iraq), you will also remember that we heard lots of talk about winning hearts and minds.

Which seems pretty idiotic now, really. Tanks, bombs and bullets have never ‘won’ hearts and minds, not for dictators and not for Americans. They can cow them, but certainly not inspire them.

A desire for a better life, a conviction in the right to experience freedom (whatever that might mean in practical reality), a belief that these changes will lead to better opportunity and more jobs – that is what inspires people.

That change needs to happen internally first. People need to believe that they do have a say.

Then they need to stand up and face down the guns.

Once that happens, society changes forever.

Whether we get western style democracy or not is surely the wrong frame for this debate. Whether the citizens of these countries are able to re-establish their rights to participate in society is.

George goes on to point out the increasing role that Iran is playing, something we well understand ( we have pointed out before that Iran plans to grow from the world’s 18th largest to the 12th largest, and that theoretically should be part of the G20).

He also points out that these regimes are generally based around a strong military, and regime change requires military movement.

This is all well and good, but it trivializes the role of the populace themselves.

As my old friend Lee Bryant pointed out in his excellent article A Wake Up Call for Despots, that only lasts as long people let it be so. Lee quotes David Hume saying

[quote]“Nothing appears more surprising to those, who consider human affairs with a philosophical eye, than the easiness with which the many are governed by the few; and the implicit submission, with which men resign their own sentiments and passions to those of their rulers. When we enquire by what means this wonder is effected, we shall find, that, as force is always on the side of the governed, the governors have nothing to support them but opinion. It is therefore, on opinion only that government is founded; and this maxim extends to the most despotic and most military governments, as well as to the most free and most popular.”[/quote]

Lee feels social media has enabled a tipping point that allow the many to experience their power, first through Wikileaks helping to crystalise sentiment by bringing transparency to shady geo-political dealings, and then as an organizing medium:

[quote]Hard power is concentrated in military and police forces. The soft power of opinion may be stronger in aggregate, but it is highly distributed. Perhaps the most exciting capability of social technology is the way in which it can aggregate lots of small, low-cost individual actions at scale to produce network effects.[/quote]

Othman Laraki of Twitter has even codified this tipping point in The Economics of Dissent: 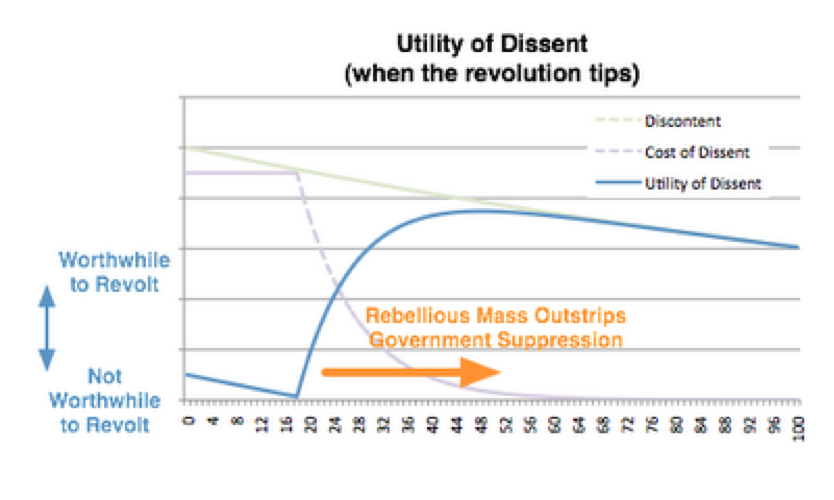 Dr Friedman, you may be right to say that change at a geo-political level has not yet occurred.

But ‘real’ change has. It might take two months or two generations, but the relationship between rulers and ruled in the Middle East has changed forever, and outside forces will not just be influencing this change – they will be influenced by it too.

The Middle East is: