Premature Speculation: The Arab Spring Cannot Be Considered as Democracy’s Fourth Wave. Yet. 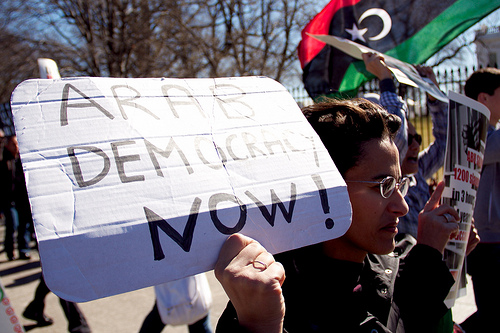 Indeed, some observers have been stunned by the speed, force and scale of the revolution, which continues to reverberate around the region today. The fall of the autocratic regimes – particularly in Tunisia, Egypt and Libya – has also led many political analysts to label the Arab Spring as the start of a new fourth wave of democracy.

This fourth wave would follow Samuel P. Huntington’s historical analysis of the global democratic process. According to Huntington, the adoption of democracy happened in three waves: The first wave began in the early 19th century across North America and Western Europe in the aftermath of the American and French revolutions, the second began after World War II, and the third began in the mid-1970s – starting in Portugal and Spain before spreading across Latin America, Asia, Central Europe and Africa.

In each of these waves, there was a sudden upturn in countries that began to adopt democratic ideals, leading to a political transition towards democracy. The third wave of democracy, for example, saw the number of democratic nations triple from 39 in 1974 to 123 in 2005. Interestingly enough, the Arab world was the only major region in the world that the third wave had bypassed completely, leading some commentators to coin the phrase “Arab exceptionalism” to characterize this phenomenon.

The problem for the Arab world stems from the fact that political change need not necessarily mean democratic change. Henry Kissinger for example is sceptical of the type of change in the Arab World. “I don’t think the Arab Spring is necessarily a democratic manifestation, I think it is a populist manifestation,” Kissinger told the Wall Street Journal.

Historically, many countries, particularly in Latin America and Africa during the initial stages of the third stage, also faced the problem whereby political upheaval only led to another autocratic regime coming into power. Admittedly, the cold war was a major factor during that time, as governments were essentially being propped up by the US based purely on the fact that they weren’t communists.

However, a different but equally powerful factor could lead to another “meet the old boss, same as the new boss” scenario today. Countries experiencing political change tend to face many socio-economic problems during their early stages, such as poverty and unemployment. One solution most countries would then take would be to turn to advanced economies such as the US or the European Union for economic advice or financial aid.

But can and should the Arab world really turn to the so-called bastions of democracy anymore for help? Bogged down in their own muck, the US and the European Union are no longer shining examples of both political and economic enlightenment. The governments of these economies also no longer have the political and economic will to guide the Arab world towards democracy, especially when they face economic turmoil on their own turf.

Instead, the most likely and well-equipped country to come to the Arab world’s aid is China. Closer to home, Qatar as one of the world’s fastest growing economies, could provide assistance as well. But neither China nor Qatar would be interested in promoting the democratic agenda. Furthermore, the age-old axiom that democracy would eventually lead to economic stability has also been proven to be not necessarily true.

[quote]“Around the globe, it is democratic meltdowns, not democratic revolutions, that are now the norm,” writes Joshua Kurlantzick, a Fellow for Southeast Asia at the Council on Foreign Relations, in the New Republic. “The truth is that the Arab Spring is something of a smokescreen for what is taking place in the world as a whole.”[/quote]

According to a report by Freedom House, global freedom has been on a decline in the past five years with most authoritarian nations becoming more repressive, while citizens in moderate democracies also saw a decline in their overall freedom. Germany’s Bertelsmann Foundation, also spoke of a “gradual qualitative erosion” of democracy and concluded that the number of “highly defective democracies” had doubled between 2006 and 2010. In addition, newly emerging democracies are refusing to lend their weight to the democracy promotion agenda.

The reality is that successfully implementing a western-style democracy in the Arab world is no guarantee. Using a western prism, democracy’s so-called fourth wave would simply be just another ripple in the ocean.

Still, this doesn’t mean that we should ignore the efforts of the Arab Spring. Regardless of whether the Arab world eventually achieves democracy or not, there has been a fundamental change in the region, as EconomyWatch.com has previously mentioned.

This change is one that could be even more important than our traditional perceptions of democracy. A civil society has emerged in the Arab world – one that is powerful enough to determine the fate of its own citizens. Perhaps this is the new “Arab Exceptionalism”.