Many investors are in a rush to buy ENJ as the coin trades in the green zone while major losses have hit other crypto assets.

Several reasons suffice as to why this metaverse-based token has been on a bullish run. This article evaluates the performance of this gaming coin and why you should buy ENJ. 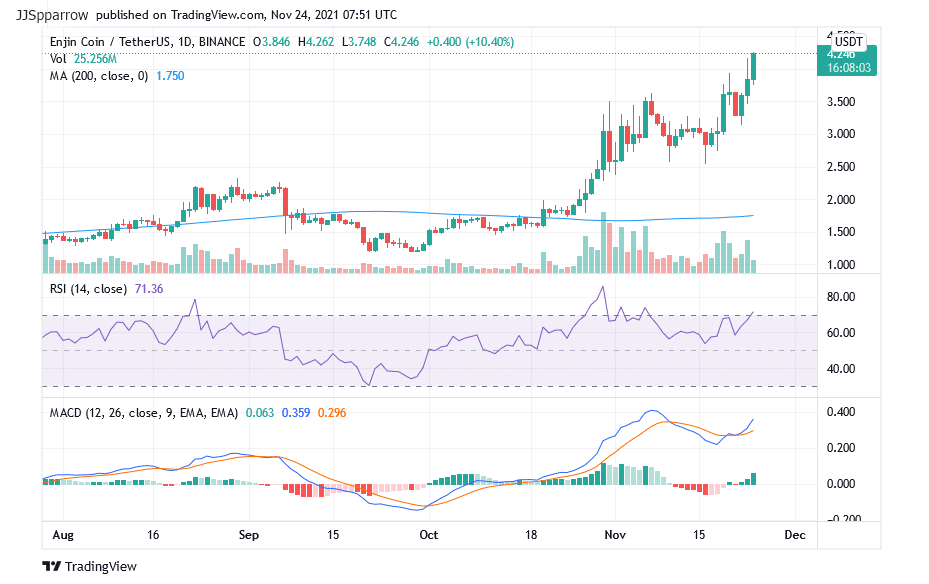 In the last month, this gaming token has gained an outstanding 123.08%. A further look into the aggressive bullish run of the Ethereum-based cryptocurrency indicates that the asset has recorded over 3,000% increase year-to-date (YTD).

This stellar performance of the metaverse-focused token has eclipsed its previous all-time high (ATH) record of $4.18 that was set only an hour ago.

This bullish run is very likely to continue, and this might be the right time to buy ENJ and rise with the market.

The 200 day MA support price of $1.73 further confirms the impressive run of the Ethereum-based crypto.

The convincing performance of the asset was further confirmed by the Relative Strength Index (RSI), which pegs ENJ in the overbought region of 71.36.

All the technical analysis indicators point to one fact; this is the right time to buy ENJ.
As per fundamental, the Enjin network has seen a price spike following the interest of investors in the metaverse ecosystem.

Since the change of name of popular social media platform from Facebook to Meta, many of the tokens under this ecosystem have continued to gain massively and attract investments.

A large percentage of all the cryptocurrencies under the metaverse ecosystem witnessed a price gain of double digits in the last 7-days, according to data from Coinmarketcap. Enjin coin is one of them, and smart investors are in the market to buy ENJ.

Enjin operates with a mandate of making non-fungible tokens (NFTs) usage a lot easier and convenient for individuals and businesses. The asset is used to back the value of any NFT minted within the Enjin ecosystem.

The Enjin coin on November 4 announced the formation of a $100 million Efinity Metaverse fund aimed at formalising support for the Enjin ecosystem partners and helping make the decentralised Metaverse a reality.

This funding will be used to support Enjin and those that will adopt Efinity. Also included in the financing round are organisations working on the Enjin ecosystem integration, which will integrate Efinity with the Enjin Wallet and NFT marketplace.

The scheme focuses on pioneering new projects and building other areas aligned with the Metaverse, NFTs, and Efinity’s core infrastructure.

In addition, the protocol is looking to launch on the Polkadot ecosystem through the ongoing parachain auctions.

According to a November 19 tweet, the Enjin team is launching an Efinity crowdloan with users getting 10% of the EFI supply token and limited edition NFTs if the bid is successful.