DeFi Coin (DEFC) is back with a bang. On Wednesday 4 May DeFi Coin was the top gainer on the PancakeSwap decentralised exchange.

Launched on the 10th May 2021, DeFi Coin yesterday delivered on the key milestone of its roadmap with the switching on of its decentralised exchange, DeFi Swap.

DEFC is the native token of DeFi Swap, so not surprisingly it was the direct beneficiary of the DEX going live. At one stage the price registered an intraday candle movement of 300% from the day’s low to high.

Buyer enthusiasm has dug in. DEFC closed out yesterday’s session around 160% higher at $0.2586, while at the time of writing the token is priced at $0.40 for 300% increase on the price at the start of Wednesday’s session. 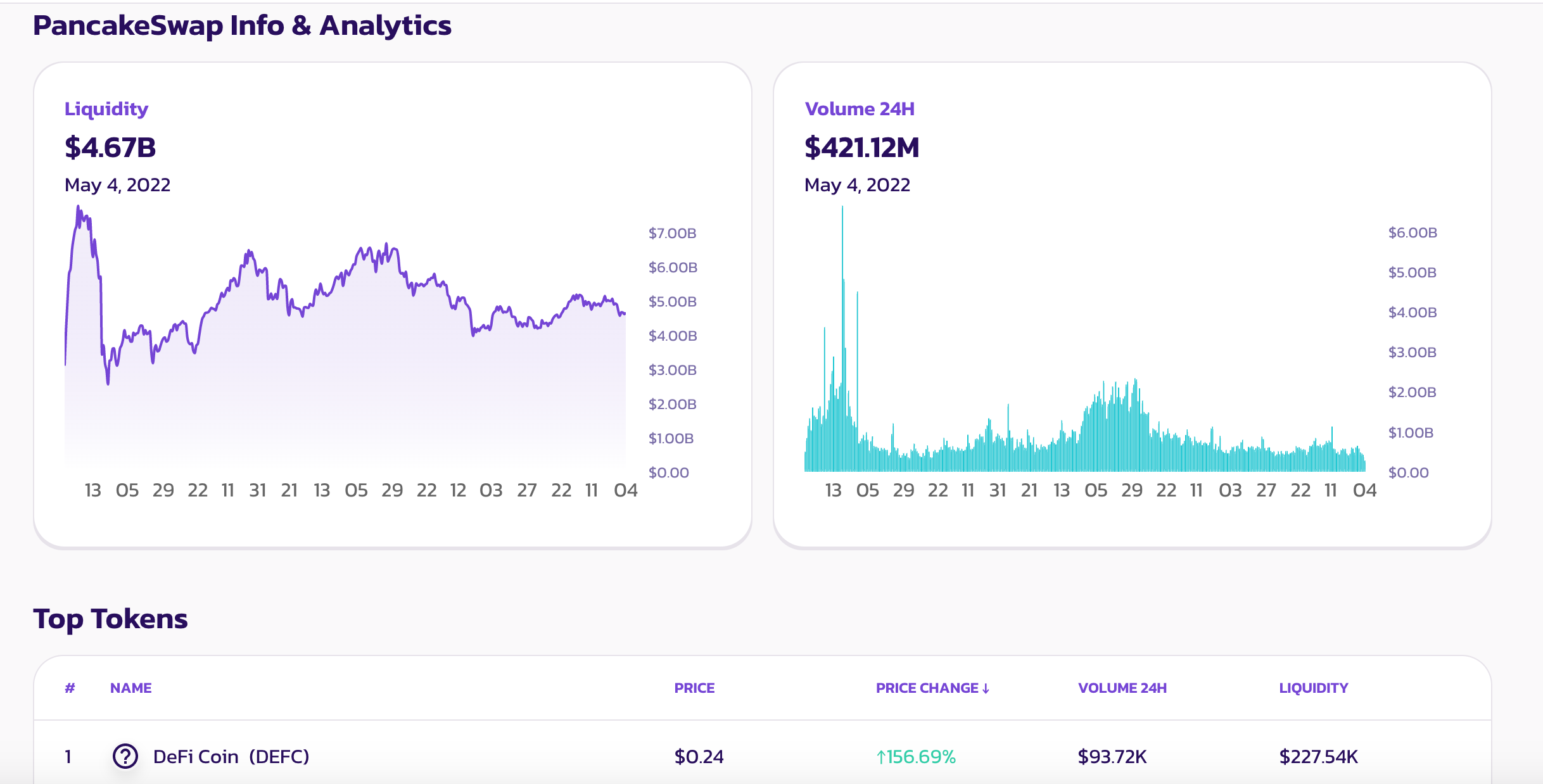 Although the roadmap appeared to be stalled since the end of last year, the delivery of the DEX has transformed sentiment around the project. DeFi, alongside NFTs, remains among the hottest sectors in crypto.

If you are looking to buy cryptocurrency then check out our comprehensive guide.

DeFi is already a $200 billion opportunity

In practice DeFi Coin encompasses all three, which is what makes it such an enticing prospect for those entering the DeFi space or those who simply wish to gain exposure to the capital appreciation potential the coin represents.

In the first quarter of 2022 DeFi sector protocols had a combined total value locked of approximately $200 billion.

But DeFI is not going to stop at the three areas identified above – the whole of finance is susceptible to disruption by decentralised networks that dispense with the need for trusted third-party intermediaries and all the comparative inefficiencies and costs that entails.

From banking to fund management, mortgages to bonds, DeFi will continue to march ahead. For sure there are challenges, such as lack of interoperability between blockchains and a murky regulatory environment, but both of those areas, it could be argued, are becoming more manageable by the day.

Still, as can often be the case with new crypto projects – and especially in decentralised finance where there are literally new DeFi projects launched weekly –  initial enthusiasm can wane.

Sometimes a rush into new DeFi projects is artificially stimulated by one-off rewards paid to traders in the form of the native token, which serves ultimately to further encourage footloose behaviour by traders and investors constantly on the lookout for short-term gains. DeFi Coin deliberately set its face against this sort of short-termism.

Alone among DeFi protocols, DeFi Coin from the outset has sought to incentivise long-term adoption.

Nevertheless, short term attitudes persist and the perceived slow progress in rolling out its DEX clearly tried the patience of investors.

But to its credit the team has not veered from its stated intent of building a platform geared to longevity and educating consumers around the world on the benefits of DeFi.

Matching the lurch from euphoria to depression, the DEFC price surged to an all-time high of $4.00 on 19 July last year before declining the following week to $1.12.

The price had got ahead of fundamentals in dramatic fashion. The bearish price story will have caused pain to those buying at or near the tops and left a sour taste in the mouth of others who may either have been sitting on losses or who expected an imminent launch of a DEX. 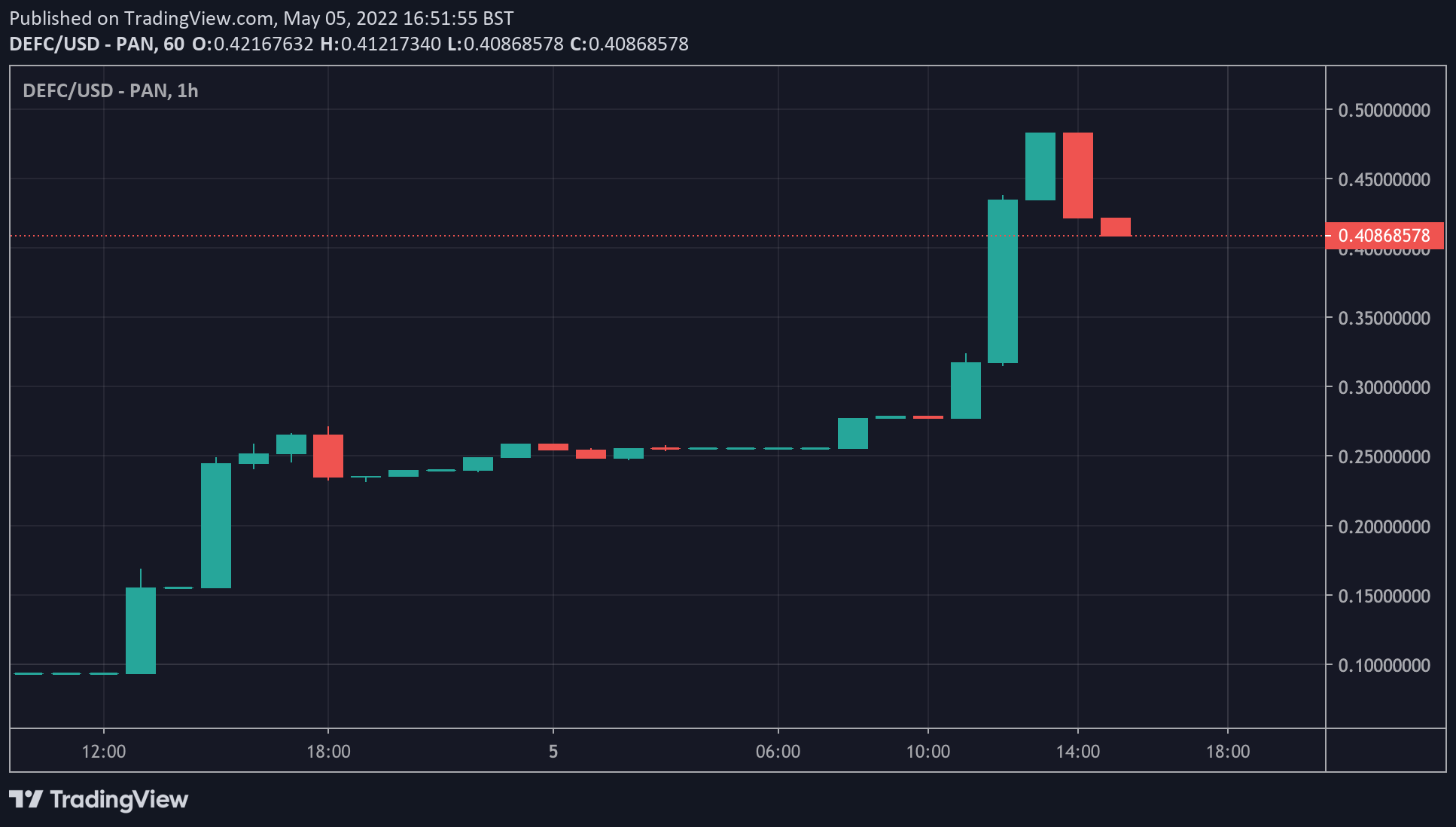 But out of setbacks come opportunities. On the basis of regression to the mean alone, the risk-reward upside following such a dramatic drawdown, which saw the coin lose more than 90% of its value, the current alignment of forces is a buyer’s dream.

It is not unrealistic to pencil in a price target that could see DEFC trading back above $2.0 for 10x gains.

The short-term traders may well be looking on and wetting their lips, but so too will those with a view to a longer-term engagement.

Founder Scott Ryder: “Those who stayed the course will reap the benefits”

Although there may have been difficulties and the apparent lack of communication from the project probably didn’t help, the real issue was the product, or the lack of one. On that, the corner has been turned.

Project founder Scott Ryder when tackled on the roadmap delays provided an upfront accounting of the difficulties: “We have had a number of technical issues to resolve related to early design decisions that turned out to be much more problematic to implement securely than at first envisaged.

“There is no way we could put out there a product that was not rock solid – a reckless rush to launch would have been a much bigger danger to investors than a delay to get things right. Certainly, that has allowed negative sentiment to build up around the non-appearance of the DEX, but those who have stayed the course will reap the benefits.”

But why has the project been so poor at communicating its problems and signalling the path ahead to its early investors?

Ryder was sanguine. “Look, DeFi is a revolutionary construct and we were trying to do something a bit different to everyone else.”

DEFC has a 10% transaction tax on sells and buys, of which half is automatically transferred to DEFC token holders.

“The tax, combined with the peace of mind that flows from our static rewards system, is something you won’t see elsewhere in DeFi,” Ryder continues.

“We could have kept putting out PR updates saying we were behind schedule, but that would likely not have been enough for the most vocal of our critics, so instead we ploughed ahead with executing on our roadmap, which we have now achieved as far as the first version of our DEX goes.”

So how does the team intend to improve investor relations going forward? “Telegram is one of our main channels and we had to turn off the chat feature because of the pile-on that crossed the line from valid criticisms and concerns to becoming a space that drove out serious committed inventors and was increasingly becoming a forum for spreading fear, uncertainty and doubt by bad actors.”

Ryder says the team will be unveiling future plans over the coming days and weeks, all of which he expects to have “market moving” impact.

In addition to PancakeSwap, DEFC is currently also listed on the Bitmart centralised exchange (CEX) but plans are being put into action to speed listings on other CEXs.

Ryder explains: “We are going to be breaking down the main wallet into three seperate ones. The purpose of this is to have the main wallet providing liquidity to all the major centralised exchanges we are planning to list on.”

So what will the other two wallets be for?

“We will have a separate marketing wallet, and a third wallet dedicated to funding our development work on the exchange and help provide greater liquidity to as many token pairs as possible on DeFi Swap.

Ryder said that the marketing wallet will be set-up to sell DEFC at the rate of $500 per hour.

With other plans around NFTs and as its swap-earn-farm-stake ecosystem primed for stellar growth, DeFi Coin and DeFi Swap are excellent vehicles for securing a share of the lucrative returns on offer in DeFi.

Ryder is suitably bullish on the future for decentralised finance and his family of DeFi products.

“Even as central bankers around the world start to hike interest rates, the returns on offer to lenders are still puny compared to the double-digit, and sometimes triple-digit, returns from liquidity provision, staking and yield farming available in DeFi.”

Gary was the production editor for 15 years at highly regarded UK investment magazine Money Observer. He covered subjects as diverse as social trading and fixed income exchange traded funds. Gary initiated coverage of bitcoin and cryptocurrencies at Money Observer and for three years to July 2020 was the cryptocurrency analyst at the UK's No. 2 investment platform Interactive Investor. In that role he provided expert commentary to a diverse number of newspapers, and other media outlets, including the Daily Telegraph, Evening Standard and the Sun. Gary has also written widely on cryptocurrencies for various industry publications, such as Coin Desk and The FinTech Times, City AM, Ethereum World News, and InsideBitcoins. Gary is the winner of Cryptocurrency Writer of the Year in the 2018 ADVFN International Awards.

View all posts by Gary McFarlane