The Chiliz blockchain is gaining serious traction in the sports world, and investors are piling to buy CHZ. In the past 24 hours, CHZ has started on what may turn out to be a series of uptrend movements in the coming weeks.

Evaluating the technical and fundamental performances of the ERC-20 token will help investors decide if this is an ideal time to buy CHZ.

CHZ: Preparing For A Breakout 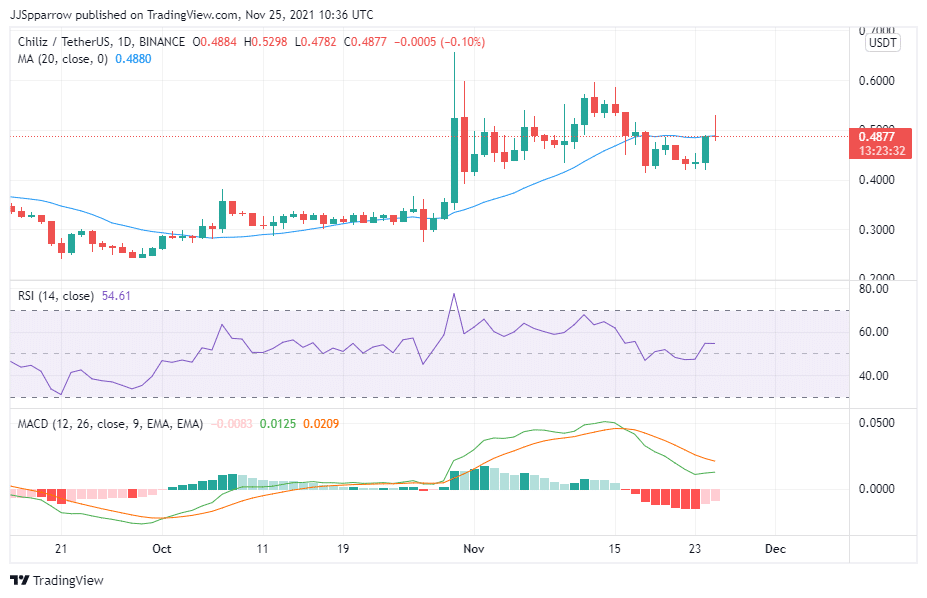 The crypto market earlier caught a tailwind in early November, with Bitcoin leading the charge. However, the benchmark crypto has faltered recently as the bulls sway towards alternative currencies (altcoins).

One of the top-performing digital tokens in the past 24 hours is the sports-oriented blockchain protocol Chiliz. The digital asset is likely preparing for a major breakout, as indicated by the asset’s fundamental performances.

However, CHZ is only touching half of its potential. The fan engagement token protocol previously hit an all-time high (ATH) of $0.8786 on March 13, a sight that there is still a lot of growth ahead for the protocol.

This growth potential presents a unique opportunity to buy CHZ, rise with the market, and hit a new record value.

CHZ still has a long way to go despite the current bullish run. The trading chart reflects that the digital token is trading on par with the 20-day moving average (MA) support price.

This data shows a struggle between the bulls and bears to sway the market in their favour. However, the 200-day MA price of $0.329 points to a more positive long term outlook for the digital asset.

The 14-day relative strength index (RSI) indicates that CHZ is trading in the underbought region of 54.38, which presents a unique opportunity to buy CHZ and rise with the market.

On the other hand, the moving average convergence and divergence (MACD) reflect a more bearish outlook as the orange trendline rises above the buy signal.

Chiliz’s mixed technical performance largely stemmed from the recent fundamental moves of the protocol. Like several crypto protocols, the asset traded in the bear zone for most of the week and only recently picked up steam after several strategic partnerships.

Also, French football giants AS Monaco will be launching the $ASM Fan Tokens on the Chiliz blockchain. According to the media release, this partnership with the blockchain protocol will allow the elite team’s fans to get exclusive voting rights in polls, VIP rewards, AR-enabled features, games, and several other perks by holding the token.

The Chiliz blockchain has extended its coverage even further by announcing the $DAVIS Fan Token listing on its exchange. This new development is on the back of a prior partnership with the Tennis organising company.