The Selected Unsecured Creditors Committee has appointed the law firm White & Case LLP-Pesce & Colodny to represent Celsius’s unsecured creditors in court. It is worth noting that Celsius Network is a US cryptocurrency lending platform. It filed for Chapter 11 bankruptcy protection in a New York court last month. Many of its investors have written to the judge presiding over the case. Pleading with him to assist them in recouping their investment capital.

Many claims they are on the verge of bankruptcy, and have lost their life resources. Such as retirement money, and cannot pay their rent or mortgages, according to letters provided to Judge Martin Glenn. He is in charge of the Celsius case in the Southern District Court of New York. This occurred the day after the announcement of the Celsius second hearing on August 16, 2022. 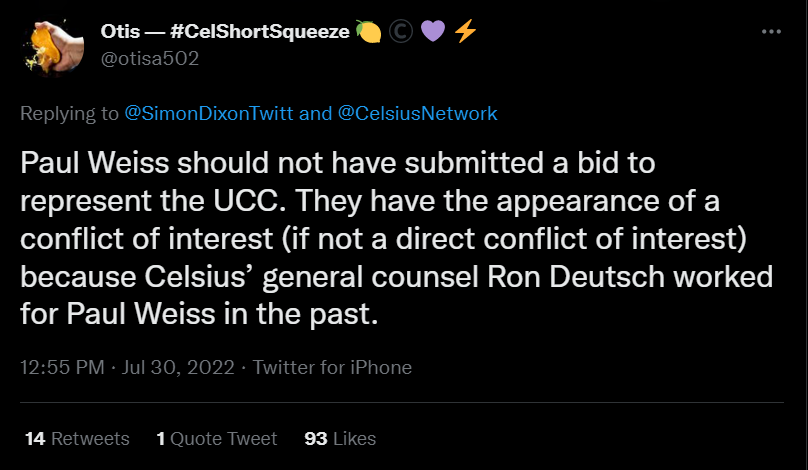 I believe it is advantageous to be aware of the insider strategies of the opposition. No legal firm could represent anyone if there were a conflict here. The UCC chose White & Case LLP to represent the interests of unsecured lenders, so the conflict of interest issue was dealt with.

According to the original motion, Bolger was the company’s full-time CFO. He earned a base salary of $750,000, a performance-based cash incentive of up to 75% of his base, and stock and token options for more than $1.3 million at the top end.

Celsius Seeks Ex-CFO Rod Bolger Due to his knowledge in the debtor’s industry, Celsius is looking to re-hire its CFO. They have promised him $92,000 a month for a minimum of six weeks. According to a filing filed in the Southern District of New York, the corporation believes Bolger is required to act as an advisor to it while it navigates the bankruptcy process.