Troubles have plagued the Celsius network for more than a month as  Celsius Legal Battles such as Legal fights, insolvency hearings, and data breaches continue to plague the network. Several issues have arisen since the beginning of the Celsius network issues, including lawsuits, bankruptcies, and data breaches, all of which continue to undermine the network.

Celsius’s problems appear to have persisted since the legal proceedings began several weeks ago. Several parties have reportedly criticized the loan company, including a recent class action lawsuit filed by a US law firm. According to sources, on July 24, Braga Eagel & Squire, P.C. announced litigation involving many crypto-focused projects. Celsius is specifically mentioned in the press release as one of the many defendants in this class action lawsuit.

Rod Bolder, a former CFO, was asked to serve as a bankruptcy advisor in a motion presented by Celsius on July 25. The hearing date for this recently filed motion is August 8. Bolger began working for the organization possibly in November of last year. Chris Ferraro took over for Bolger in June of this year.

Despite having given an eight-well notice on June 30, Bolger is still considered a member of the firm’s staff for at least another month. They plan to pay Bolger $120,000 in Canadian dollars for six weeks. Celsius will benefit from his experience in “critical accounting and financial competence amid exceptional circumstances.”

Celsius May be Able to Recoup $840 million from Tether

Tether liquidated Celsius collateral a few weeks ago due to the lender’s refusal to settle. Celsius, on the other hand, declared bankruptcy just a few days afterward. The Financial Times reported on July 26 that Tether’s recovery from Celsius might be scrutinized under the bankruptcy statute. According to sources, Celsius’s legal counsel recently petitioned the Court if the lender has the right to recover the value of collateral sold by Tether and other lenders.

“Can Celsius recover . . . loan liquidations completed in the 90 days before filing?”  the Celsius attorney questioned in Court. The answer to this inquiry may compel Tether to pack the monies obtained from selling the BTC collateral into Celsius. If this occurs, a portion of Celsius’ financial troubles will be resolved.

The Celsius network and community have been involved in a few brief squeeze initiatives. The short squeeze campaign occurs when the token price rises sharply, driving investors who bet the token’s value will fall to acquire more to prevent losses. 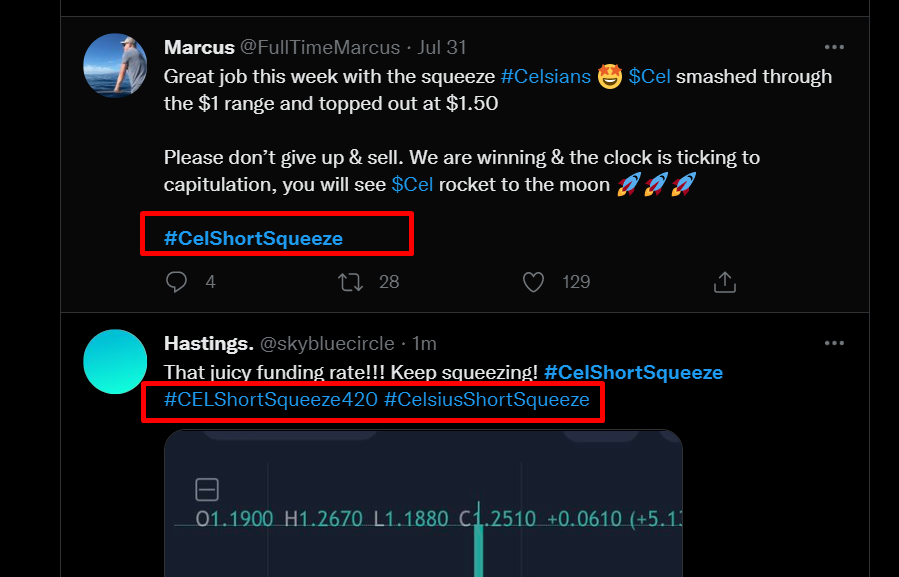 Short squeezing efforts drive out the token short sellers, forcing them to become long, and Celsius is now undergoing a brief squeezing campaign to save the token. The hashtag #CelShortSqueeze is still trending on Twitter.