Laos Commits to Realizing the AEC 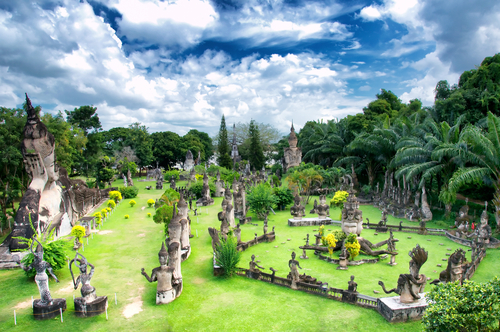 The accession of Laos to the World Trade Organization in 2013 was the latest in a series of steps towards achieving economic integration. The next milestone in its integration agenda is the establishment of the ASEAN economic community at the end of 2015.

The accession of Laos to the World Trade Organization in 2013 was the latest in a series of steps towards achieving economic integration. The next milestone in its integration agenda is the establishment of the ASEAN economic community at the end of 2015.

Laos has committed to realising the AEC. The country is on track to implement its tariff commitments, kept no higher than 5 percent, starting from January 2015. Laos has also made significant progress in other areas. A trade portal, an online platform to boost transparency on trade-related regulations, established as part of the ASEAN commitments to create a single window. This also paves the way for future implementation of the Trade Facilitation Agreement in the WTO.

Despite the global financial crisis, Laos managed to maintain a robust economic growth rate of 7.6 percent in 2014, although this represented a slight decline from 8 percent the year before. The major source of growth is the service sector, chiefly distribution and tourism, which grew at a rate of 9.3 percent. The industrial sector — in particular, extractive industries, construction, food and non-food processing — came second with a growth rate of 8.7 percent, while agriculture grew by 2.9 percent.

Laos’s growth is faster than the average growth rate of developing Asian countries, which is around 6.5 percent. Blessings include abundant natural resources, a low-cost workforce, and proximity to the fast-growing markets of China and ASEAN.

But that impressive growth is also accompanied by some challenges.

Mining and hydropower make up over 60 percent of the country’s exports. The expansion of extractive industries is an example of the way in which rapid economic growth has made Laos more vulnerable to external shocks. A decline in global commodity prices hit the mining industry. Even though exports of hydroelectricity generate substantial revenue, it creates a source of tension between Laos and its neighbours for environmental reasons.

While low wages attract investors, businesses find it difficult to hire and retain qualified labour. There is a lack of skilled employees to serve manufacturing and other technology-driven jobs.

The country’s immediate neighbours dominate the investment landscape, though the Lao government has tried to broaden its appeal to traditional investors such as Japan and Europe. Foreign direct investment from China, Thailand, and Vietnam makes up over half of total FDI inflows. China surpassed Vietnam in 2013 as the biggest investor, with approved FDI of about US$5 billion. Mining and hydropower continue to be the leading sectors attracting foreign investment, accounting for about half of approved projects.

So what should the Lao government do to entrench economic growth? Supporting business to prepare for the AEC is crucial. This will ensure that the Lao economy maximises potential benefits from regional integration. This requires the government to enhance productivity and competitiveness, improving the business-enabling environment, and further deepening economic integration.

In this respect, removal of barriers to doing business in Laos will encourage investment and stimulate productivity enhancement. Laos still ranks poorly in the ease of doing business rankings compiled by the World Bank. The country has improved its ranking from 155th to 148th in 2014. This was thanks to the establishment of a collateral registry and improved disclosure rules for the Lao Securities Exchange. Yet Laos is still lagging behind other ASEAN members. Singapore remains as the top ranked nation while Malaysia and Thailand are at 18th and 26th place respectively.

Laos has made good progress so far but needs more. It completed a process-mapping exercise for starting up businesses and a plan for further simplification has been finalised by an inter-ministerial task force. Bold action to further streamline and simplify procedures for business registration, tax registration, and sectoral licensing procedures will help.

On deeper economic integration, a key challenge is to follow through with fuller implementation of legal reforms enacted as part of WTO accession negotiations over recent years. This is especially challenging in the post-accession phase. Other countries’ experiences show that reform momentum may begin to slow down. And the growing weight of the mining and hydropower sectors in the Lao economy mean that efforts to diversify growth are important.

In a broad sense, 2015 is a year of consolidation for the Lao government. A focus on policy reforms to facilitate economic integration will help Laos lock in its impressive economic growth for the future.