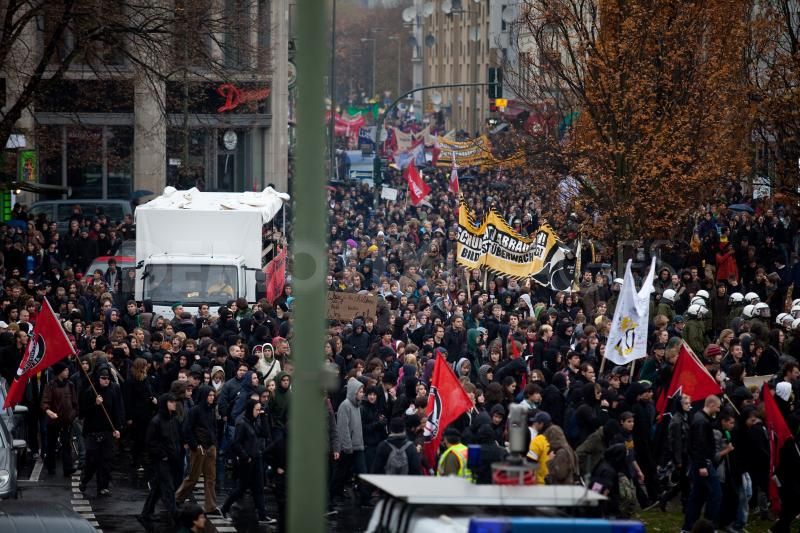 The world’s fourth largest economy, Germany, has abolished all higher education tuition fees after flirting with the system for a few years. The contrast could not be greater with both the United States and the United Kingdom, which has largely aped the US model with potentially disastrous results.

In the US, tuition costs have risen 500% since 1985 and those who borrowed for a bachelor’s degree granted in 2012 owe an average of US$29,400. Some 40 million Americans are paying back US$1.2 trillion in outstanding student debt. US senator Elizabeth Warren, who is campaigning to lower fees, says the burden is stopping young Americans from buying homes and cars, or starting small businesses. Meanwhile, existing federal financial aid to students is poorly targeted, with half of federal tuition tax credits going to the wealthiest 20%.

In the UK, the problem of student debt could become even worse than in the US. The Tory Government introduced tuition fees of £9,000 (US$14,500) a year in 2012 and average debt levels per student are now expected to be £44,000 (US$71,000). Yet, the system is self-defeating as most of the debt may never even be paid off. The UK’s Institute for Fiscal Studies suggests that nearly three quarters (73%) of today’s students will fail to clear their debts, and may only have them written off 30 years after graduating, by which time they could be in their mid 50s.

Sara Goldrick-Rab, a University of Wisconsin-Madison sociologist and educational policy expert, argues that both the US and the UK could follow the German example if the political will were there. But both countries have veered so far to the political right that it is hard to see the policies being overturned. Goldrick-Rab co-authored the Lumina report, which suggested giving US students from families with an annual income of up to US$160,000 two free years of higher education – including books and supplies – just as they now get free primary and secondary schooling.

[quote] “What Germany has done is fabulous and it’s not surprising that people in the US don’t understand it. What I really liked was the reversal of their decision to impose them,” she said. “It’s a great shame that the UK has gone to a system like ours because it’s a disaster to be avoided at all costs. British students coming out with that much debt will be very unhappy in a generation or two, just as we are in the US.  I’d love to see a 180 degree turnaround in the UK as well, but I can’t see it happening. The same neoliberal economic assumptions are driving policies in the UK as in the US, even though they are not justified by data.” [/quote]

The German political decision to introduce tuition fees was defeated by popular opposition which carried echoes of the mass student protests in Quebec that halted proposed tuition fee rises. The German Free Education Movement was born when 200 organizations, including student unions, trade unions and political parties, formed the Alliance against Tuition Fees. Students took to the streets all over Germany in response to the seven West German states that introduced fees in 2006 and 2007.

In Hessen, students occupied their universities and in Hamburg there was a fee strike. Meanwhile, in Bavaria, a movement that began with hundreds of students protesting in 2008 grew rapidly. By 2013 there were several thousand protesters and public opinion had shifted. The group delivered a petition for a state referendum on higher education policy. It was signed by 1.35 million voters and caused the state’s conservative premier to scrap tuition fees just a few days later. Only Lower Saxony still has fees and they will be scrapped this year. Again there is a major contrast with the UK, where much weaker protests had no effect. Only 15,000 students marched in London in 2010 and the movement subsided quickly.

“In the US, people have been laughing at Germany saying they are throwing money away and subsidizing the rich,” said Goldrick-Rab. “But this is a misunderstanding. Having a universal policy makes it more transparent and welcoming to the lower classes. The critics are missing the powerful signal of the word ‘free’ and how divisive the means-tested system is.”

[quote] “Going through the process to prove you deserve aid is demeaning and alienating and creates multiple classes of people who hate each other. The near poor are almost poor enough to get aid, but they can’t get it, so they are angry at the poor. The middle class are also moving into the poor category so they are saying ‘how dare you poor people get this aid when we deserve it too?’ And they’re right, they do deserve it too. Universal systems, such as the German one, are much more stable and less divisive.” [/quote]

Goldrick-Rab’s Lumina Report explains how the US Government could afford to pay for the first two years of higher education. The arguments are quite complex, but the essence of her proposition is that ending Government subsidies to elitist private colleges, such as Harvard and Stanford, would fund the system overnight. “It’s a global question about the degree to which higher education is part of the structure which gives people more chances, or part of the structure for sorting people into boxes. The current system in both the UK and the US is highly elitist,” she said.

There is little political appetite in the US or UK to change the policies, however. Even on the left – the US Democratic Party and the UK Labour Party, support tuition fees. But other European countries have taken a different view.  The Scandinavian countries maintain high-quality; efficient mass university systems, like Germany, without charging students, and the Dutch, the Swiss and the French charge tuition fees at a fraction of the English level.

Jason Houle, an assistant professor of sociology at Dartmouth College, says rising college debt is one of the major reasons for the overall increase in debt levels among young Americans aged 24 to 28. More than a third in that age group has more debt than assets, double the proportion of their peers in the 1980s. Houle’s research shows how this age group has shifted credit use away from home mortgage debt and towards student loan and consumer debt.

[quote] “The trend towards greater student debt is part of the neo-liberalization of the economy. It’s about privatizing risk and saying, ‘okay, guys, you take your own risks now’. It’s no longer the responsibility of the Government, or the institutions. The political scientist Jacob Hacker called it the Great Risk Shift. We treat corporations in exactly the opposite fashion,” he said. [/quote]

Houle says that if Wall Street companies were not making profit from the system, it would be configured differently. The evidence backs up his assertion. The growth in student loan defaults has given rise to collection agencies, a new type of business. One such company, Performant Recovery, earned US$36 million last year and its shares have rocketed. Wall Street has its fingerprints all over the money. Several of the collection agencies are subsidiaries of larger companies, including JPMorgan Chase and Sallie Mae. To date, US$121 billion of the more than US$1.1 trillion in loans are 90-plus days delinquent, or in default, and those numbers are expected to grow, making collection companies even richer.

Activists are fighting back against the debt problem. For example, the Strike Debt group in the US came up with a plan to purchase and abolished a portfolio of private student loans issued to more than 2,700 Everest College students.  The debt was worth US$3,856,866.11, but US rules allowed the group to buy it for US$106,709.48 in cash, about 3 cents for dollar.

[quote] “Taking advantage of some of the crazy rules in the US to buy debt from creditors is great, but it’s also short-sighted and misses the root causes of debt,” said Houle. “Such movements in the US pull people out of the river who are drowning rather than going upstream and seeing why they are falling into the river in the first place. If we don’t change the structure of the system and reduce costs it will just be a problem again for the next generation coming through.” [/quote]

The success of the German protests suggests a way forward. In the UK, students will mobilize in their thousands in London on November 19 to demand free education. It could be the beginning of a more powerful movement against student debt.