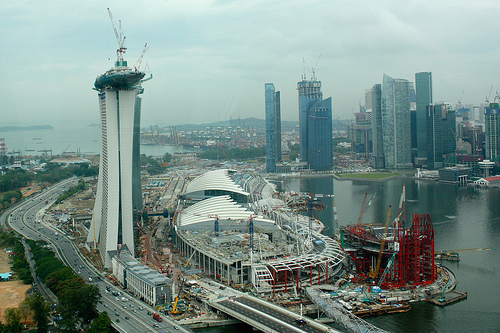 I remember the moment vividly.

It was the 26th September, 2008. Hank Paulson, then US Treasury Secretary, had got down on one knee to Nancy Pelosi, then Speaker of the House, and begged her to support his Bailout of the Too-Big-To-Fail Banks.

I was sitting in a cafe with one of my business partners at Singapore Digital Agency Qais Consulting, the formidable and intuitive Tripti Lochan.

I remember the moment vividly.

It was the 26th September, 2008. Hank Paulson, then US Treasury Secretary, had got down on one knee to Nancy Pelosi, then Speaker of the House, and begged her to support his Bailout of the Too-Big-To-Fail Banks.

I was sitting in a cafe with one of my business partners at Singapore Digital Agency Qais Consulting, the formidable and intuitive Tripti Lochan.

As the Subprime Crisis had rumbled on through the summer in the US, Asia just seemed to continue on the up-and-up. The talk was of the ‘de-coupling’ of the Asian and Western economies (a quaint term that you don’t hear much these days.)

But when Hank got down on one knee, everything seemed to change in Asia. We already knew that, almost as one, our clients’ confidence would tumble. Projects would be put on hold, downsized or cancelled.

As the ever eloquent former President Bush said,

[quote] “If money isn’t loosened up, this sucker could go down.” [/quote]

By the 28th September, the Bailout Bill had failed in its first reading in the House, and the stock market crumbled.

This was confirmation for us of what we already knew; consumer and business confidence around the world would plummet, and the global economy was going to take its worst hit for decades.

It was a matter of business survival for us to understand just how bad it would be, but the data was painfully slow in coming.

What were current consumer confidence readings? It would take weeks or months to find out, and even then only selected countries would be reported on.

I kept asking myself, what is the point of having a forward indicator when it takes so long to get the data?

Remember that consumer confidence is not drawn from government data that needs to be tallied in highly secure data rooms.

It is just an aggregation of our views.

If you had charted consumer confidence on a daily basis in September 2008, you would have seen it fall off the cliff, and not start tentatively recovering until the ‘green shoots’ talk sometime in March or April 2009. It would have continued to stay in negative or borderline territory for most of 2009.

It was not until July 2009 that the IMF reported the first upgrade in its predictions for the global economy. Take a look at that report and the GDP charts, and you will see world economy hitting rock bottom at the end of 2008 and early 2009, before flatlining for the rest of the year.

I am convinced that if we had been able to monitor consumer confidence on a daily basis, we would have been able to predict exactly what happened to the world economy during that pivotal time.

The idea stayed in the back of my mind as we battled to keep EconomyWatch.com and Qais Consulting afloat during seas that were even choppier than the Dot Com Bust (which is saying something for internet companies).

During the last year, we got some of the best brains we had in both companies and slowly started to build exactly what we had dreamed of before; a tool for tracking the perceptions of citizens around the world, of employment, business and economic conditions.

We index that data and put into a rolling 30 day dataset, to give a view of current perceptions vs those a month ago, and vs the average for the year.

Before proceeding, I need to issue a big fat disclaimer. This tool is still in Beta. There might be some errors – if you do find any please please let us know so we can fix them. You may have ideas on how to improve this tool – and if so, once again do let us know. Contact details follow at the end of the article.

Most importantly, I should let you know that the quality of the results are only as good as the number of responses we get. So the more you and people like you use it, the more accurate the data will be.

So how does it work?

When you first hit the tool, you will see a set of 9 simple questions about the economy. For example, the first question asks you if employment conditions have improved:

Each time you answer a question, you will get a little nugget of info – for example, 20% of people think employment conditions are unchanged right now – and then the next question will appear.

Within 20 seconds or so, you will be able to complete the survey. The app will then IP-detect where you are based. You can change the location if needs be, and then you click ‘Done’.

Thats it! Not too painful right?

Now you will get to have fun playing with the results. First off, you will see the Worldwide Consumer Confidence Index: 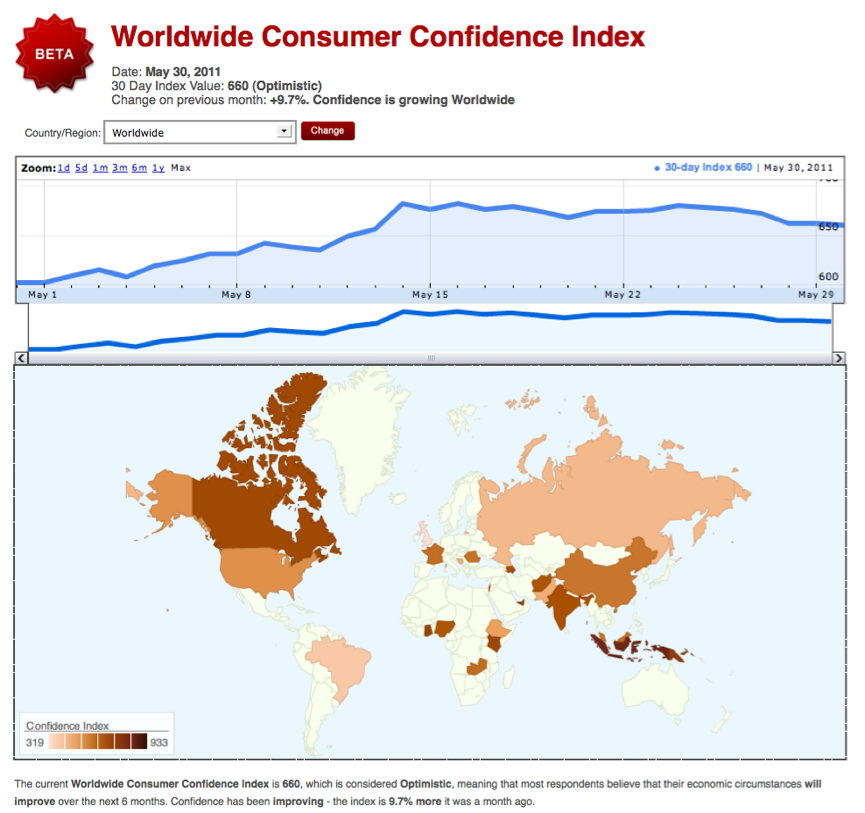 This is how it looked immediately before this article was published.

You can see that global confidence is at 650 on a scale of 0 – 1000, and that makes the world a pretty optimistic place right now [Ed: see Great Financial Crisis? What Great Financial Crisis? The World Economy in 2011]. The outlook has improved 9.7% in the last month, although it is slightly off from the high of 681 on the 14th May.

The heat map shows us the most and least confident countries, with those most countries blanked out as we don’t have responses from them yet.

Below that we have list of regions and countries with their real-time data:

You can see at the top that Asia/ Pacific is the most optimisic region, with an index score of 697, while Europe is in neutral territory at 547.

You can then see the country results. Data from countries with only a handful of responses may not be that indicative, but as more people respond, this data will get more accurate. We can already see that India has strong and growing optimism, as does Singapore, whereas the US is in more neutral territory, although it has been improving recently.

You can click into a country and see that data up close.

This will give you the overall trend, but our older survey results did not capture regions very well, so we will need a bit more time to refine the drilldown view. 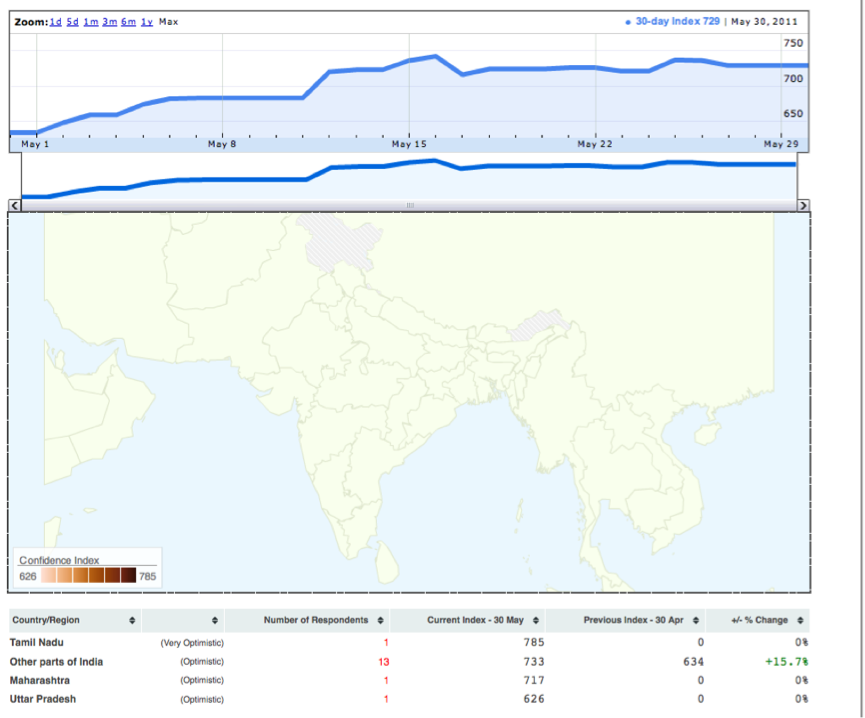 We have taken a small step, and there is still a lot to do, but we think that with your support this tool could become really useful.

Why wait so long for reports in a real-time, always on world? And why wait for the opinions of ‘experts’ when we can see the data ourselves and draw our own conclusions?

Well, what are you wating for? Give it a whirl!

Bugs to fix? Suggestions to add?

You can feed back in a number of ways:

By email to [email protected]

In the comments section at the bottom of the page on http://www.economywatch.com/consumer-confidence-index

In our LinkedIn Discussion Group