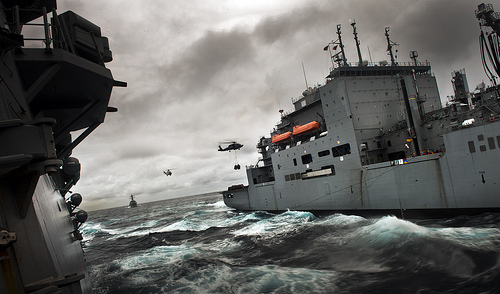 The risk of conflict in the South China Sea is significant. China claims it has sovereign rights to nearly all of the territory, which is believed to sit atop extensive reserves of oil and gas. The claims are however fiercely contest by regional players such as Taiwan and the Philippines. As diplomacy is not likely to be a sufficient means of quelling rising tensions, the United States must make hard choices and put forth the effort necessary to ensure the South China Sea remains peaceful in 2013 and beyond.

The risk of conflict in the South China Sea is significant. China claims it has sovereign rights to nearly all of the territory, which is believed to sit atop extensive reserves of oil and gas. The claims are however fiercely contest by regional players such as Taiwan and the Philippines. As diplomacy is not likely to be a sufficient means of quelling rising tensions, the United States must make hard choices and put forth the effort necessary to ensure the South China Sea remains peaceful in 2013 and beyond.

Even before Washington announced its official policy of rebalancing its force posture to the Asia Pacific, the United States had undertaken steps to strengthen its military posture by deploying more nuclear attack submarines to the region and negotiating arrangements with Australia to rotate Marines through Darwin. Since then, the United States has deployed Combat Littoral Ships to Singapore and is negotiating new arrangements for greater military access to the Philippines.

Another, more probable, scenario is that both countries will find a modus vivendi enabling them to collaborate to maintain security in the South China Sea. The Obama administration has repeatedly emphasised that its policy of rebalancing to Asia is not directed at containing China. For example, Admiral Samuel J. Locklear III, Commander of the US Pacific Command, recently stated, ‘there has also been criticism that the Rebalance is a strategy of containment. This is not the case … it is a strategy of collaboration and cooperation’.

However, a review of past US–China military-to-military interaction indicates that an agreement to jointly manage security in the South China Sea is unlikely because of continuing strategic mistrust between the two countries. This is also because the currents of regionalism are growing stronger.

As such, a third scenario is more likely than the previous two: that China and the United States will maintain a relationship of cooperation and friction. In this scenario, both countries work separately to secure their interests through multilateral institutions such as the East Asia Summit, the ASEAN Defence Ministers’ Meeting Plus and the Enlarged ASEAN Maritime Forum. But they also continue to engage each other on points of mutual interest. The Pentagon has consistently sought to keep channels of communication open with China through three established bilateral mechanisms: Defense Consultative Talks, the Military Maritime Consultative Agreement (MMCA), and the Defense Policy Coordination Talks.

On the one hand, these multilateral mechanisms reveal very little about US–China military relations. Military-to-military contacts between the two countries have gone through repeated cycles of cooperation and suspension, meaning that it has not been possible to isolate purely military-to-military contacts from their political and strategic settings.

On the other hand, the channels have accomplished the following: continuing exchange visits by high-level defence officials; regular Defense Consultation Talks; continuing working-level discussions under the MMCA; agreement on the ‘7-point consensus’; and no serious naval incidents since the 2009 USNS Impeccable affair. They have also helped to ensure continuing exchange visits by senior military officers; the initiation of a Strategic Security Dialogue as part of the ministerial-level Strategic & Economic Dialogue process; agreement to hold meetings between coast guards; and agreement on a new working group to draft principles to establish a framework for military-to-military cooperation.

So the bottom line is that, despite ongoing frictions in their relationship, the United States and China will continue engaging with each other. Both sides understand that military-to-military contacts are a critical component of bilateral engagement. Without such interaction there is a risk that mistrust between the two militaries could spill over and have a major negative impact on bilateral relations in general. But strategic mistrust will probably persist in the absence of greater transparency in military-to-military relations. In sum, Sino-American relations in the South China Sea are more likely to be characterised by cooperation and friction than a modus vivendi of collaboration or, a worst-case scenario, armed conflict.

Carlyle A. Thayer is Emeritus Professor at the University of New South Wales, Australian Defence Force Academy, Canberra. The ideas in this paper were first presented at the Annual Conference of the Association for Asian Studies held at San Diego, 22 March 2013.

Why China and the US won’t go to war over the South China Sea is republished with permission from the East Asia Forum.