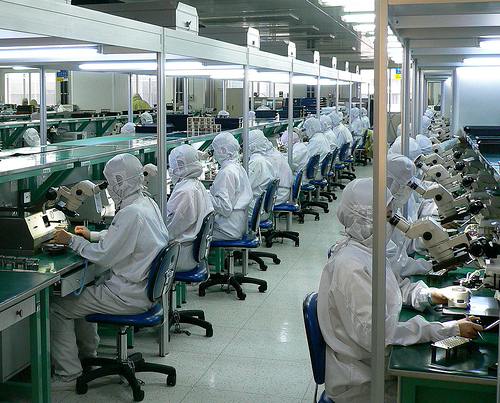 We at Economy Watch been covering the outbreak of the new labor militance in China ever since the Western media began reporting on it.

And now the – literal – economic costs of that unexpected explosion are beginning to be not just felt in China,

but analyzed all over the world in very concrete terms, even as they have just started begin to appear.

Last month, for example, while enthusiastic global consumers were playing with their new Apple iPhone 4,

researchers in Silicon Valley were engaged in something more serious.

They cracked open the phone’s shell and started analyzing the new model’s components,

trying to unmask the identity of Apple’s main suppliers.

These “teardown reports” provide a glimpse into a company’s manufacturing.

What the latest analysis shows is that the smallest part of Apple’s costs are here in Shenzhen,

microchips from Germany and Korea, American-made chips that pull in Wi-Fi or cellphone signals, a touch-screen module from Taiwan and more than 100 other components.

But what it does not reveal is that manufacturing in China is about to get far more expensive.

and inflation and rising housing costs

are all threatening to sharply increase the cost of making devices

away from this country’s dominant electronics manufacturing center in Shenzhen,

and toward lower-cost regions far west of here, even deep in China’s mountainous interior.

At the end of June, a manager at Foxconn Technology — one of Apple’s major contract manufacturers —

and site of the infamous suicides that galvanized worker unhappiness

both there and elsewhere in China’s industrial leviathan –

said the company planned to reduce costs by moving hundreds of thousands of workers to other parts of China,

including the impoverished Henan Province.

about 7 percent by some estimates —

depend on Chinese factories to hold down prices.

And those factories now seem likely to pass along their cost increases.

“Electronics companies are trying to figure out how to deal with the higher costs,”

says Jenny Lai, a technology analyst at CLSA, an investment bank based in Hong Kong.

“They’re already squeezed, so squeezing more costs out of the system won’t be easy.”

and pricing power to absorb some of those costs.

But makers of personal computers, cellphones and other electronics —

including Dell, Hewlett-Packard and LG —

deal with much slimmer profit margins, according to several analysts.

“The challenges are going to be much bigger for them,” Ms. Lai said.

Most other industries, from textiles and toys to furniture, are under considerably more pressure.

One way to understand the changes taking shape in southern China

is to follow the supply chain of the iPhone 4,

which was designed by Apple engineers in the United States,

sourced with high-tech components from around the world

and assembled in China.

Shipped back to the United States, the iPhone is priced at $600,

though the cost to consumers is less,

subsidized by AT&T in exchange for service contracts.

said Jason Dedrick, a professor at Syracuse University and an author of several studies of Apple’s supply chain.

Much of the value in high-end products is captured at the beginning and end of the process,

by the brand and the distributors and retailers.

According to the latest teardown report compiled by iSuppli, a market research firm in El Segundo, Calif.,

the bulk of what Apple pays for the iPhone 4’s parts goes to its chip suppliers, like Samsung and Broadcom,

which supply crucial components, like processors and the device’s flash-memory chip.

In the iPhone 4, more than a dozen integrated circuit chips

account for about two-thirds of the cost of producing a single device, according to iSuppli.

Apple, for instance, pays Samsung about $27 for flash memory and $10.75 to make its (Apple-designed) applications processor;

and a German chip maker called Infineon gets $14.05 a phone for chips that send and receive phone calls and data.

Most of the electronics cost much less, according to this fascinating article in the New York Times.

The gyroscope, new to the iPhone 4, was made by STMicroelectronics, based in Geneva, and added $2.60 to the cost.

the supplies that go into final assembly —

The least expensive part of the process is manufacturing and assembly.

And that often takes place here in southern China,

where workers are paid less than a dollar an hour

to solder, assemble and package products for the world’s best-known brands.

No company does more of it than Foxconn,

a division of the Hon Hai Group of Taiwan,

and uses its enormous size and military-style efficiency to assemble and speed a wide range of products to market.

“They’re low-margin, high-volume. They survive by being efficient.”

The world of contract manufacturers is invisible to consumers.

But it’s a $250 billion industry, with just a handful of companies like Foxconn, Flextronics and Jabil Circuit

manufacturing and assembling for all the global electronics brands.

And they seek to benefit from tiny operational changes.

When a company is operating on the slimmest of profit margins as contract manufacturers are,

Wages in China have risen by more than 50 percent since 2005, analysts say,

and this year many factories, under pressure from local governments and workers who feel they have been underpaid for too long,

have raised wages by an extra 20 to 30 percent.

China’s currency has also appreciated sharply against the United States dollar since 2005,

and after a two-year pause by Beijing,

economists expect the renminbi to rise about 3 to 5 percent a year for the next several years.

says Isaac Wang, an iSuppli analyst based in China.

“If a contract manufacturer can find a way to save 10 percent of the procedures,

then it gets a real good deal.”

Contract manufacturers like Foxconn are now searching for ways to reduce costs.

Foxconn is considering moving inland, where wages are 20 to 30 percent lower.

The company is also spending heavily on manufacturing many of the parts, molds and metals that are used in computers and handsets,

even trying to find larger and cheaper sources of raw material.

“We either outsource the components manufacturing to other suppliers, or we can research and manufacture our own components,”

“We even have contracts with mines which are located near our factories.”

Many analysts are optimistic the big brands will find new innovations to improve profitability.

But within the crowd, there is growing skepticism about China’s manufacturing model

after years of pressing workers to toil six or seven days a week, 10 to 12 hours a day.

the problem is these workers can’t keep working like screws in an inhuman system,”

as the recent demonstrations and strikes have made abundantly clear.

This type of low-end assembly work is also no longer favored in China, analysts say,

because it does not produce big returns for the companies or the country.

“China doesn’t want to be the workshop of the world anymore,”

and author of “The Travels of a T-Shirt in the Global Economy.”

“The value goes to where the knowledge is.”

Which is exactly what we at Economy Watch been saying the new Chinese strategy is for quite a while now.

Honors AB in Social Theory from Harvard and a PhD in International Political Economy from Princeton.

View all posts by David Caploe