Bernanke’s Great Deception: Is The Federal Reserve Waging A War On Savers & Pensioners? 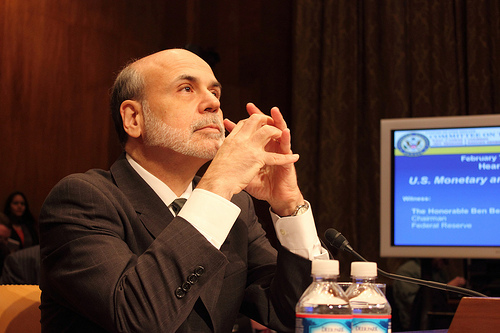 The Federal Reserve’s strategy of holding interest rates near zero to spur the economy has had its share of critics – especially since it caused a massive transfer of wealth from savers to spenders, while many middle class pensioners, who were relying on fixed interest returns, have been forced out of “safe” investments and into riskier investments. Yet, Fed Chairman Ben Bernanke is now attempting to redefine what we mean by “savings”, so as to continue dishing out ultra-low interest rates, while savers are made to suffer.

The Federal Reserve’s strategy of holding interest rates near zero to spur the economy has had its share of critics – especially since it caused a massive transfer of wealth from savers to spenders, while many middle class pensioners, who were relying on fixed interest returns, have been forced out of “safe” investments and into riskier investments. Yet, Fed Chairman Ben Bernanke is now attempting to redefine what we mean by “savings”, so as to continue dishing out ultra-low interest rates, while savers are made to suffer.

One of the painful truths about the Federal Reserve’s attempt to stimulate growth in the USA post the 2008 global financial crash, is that it has effected a massive transfer of wealth from savers to spenders. Much the same thing has happened in the UK and Europe, and has been happening for a few decades now in Japan. Sub-one-percent interest rates do not reward savings, they penalize them. You get back less than you put in, in real terms, once you adjust for inflation, which is still running in excess of two percent.

This means extremely hard times for many middle class pensioners who were relying on fixed interest returns from savings and it has forced them out of “safe” investments and into riskier investments. An example of the former would be sovereign bonds, currently paying microscopically low amounts, while an example of the latter would be blue chip stocks paying dividends of say 3-4 percent.

Fed Chairman Ben Bernanke would probably hail that shift as “progressive” in the current era since it channels funds away from public sector spending towards the private sector, which is generally more efficient than the public sector and which is therefore more likely to get the US economy back on track.

[quote]Where savers are really getting hammered, however, is in countries where it is compulsory to use pension savings to buy an annuity. The amount of annual income that a £100,000 annuity will buy these days is unlikely to be able to pay a pensioner’s heating bills by 2020 in a “cold” country like the UK or indeed, anywhere in Northern Europe, never mind keep said pensioner in any kind of civilized state.[/quote]

It follows then, that ultra low interest rates – accommodative monetary policy, in banker speak – is a curse to pensioners and so far, has had little impact in stimulating economies. An additional interesting question is what the long-term impact of this defrauding of pensioners is likely to be.

How is it likely to play with young employees today when they see that the generation now going on pension has not seen any reward for their long years of saving, and are instead likely to be spending their old age in black penury?

Will it stimulate the young to save harder and longer, or will it make them feel that the whole approach to pensions taken by the generation that preceded them has little to recommend it? My guess would be the latter, rather than the former, which is bad news for governments who are trying to lessen the pension burden borne by the State.

Bernanke, of course, is not blind to the negative impact of low interest rates on savings, but in his speech on 1 October, to the Economic Club of Indiana, he attempted to redefine what we mean by savings. The speech was entitled “Five Questions about the Federal Reserve and Monetary Policy”, and one of those questions was : “How Does the Fed’s Monetary Policy Affect Savers and Investors?”

[quote]The answer one might have expected, could have been summed up in one word: “badly”.[/quote]

But this is not the way Bernanke sees it. He starts off by apparently conceding the point: “My colleagues and I know that people who rely on investments that pay a fixed interest rate, such as certificates of deposit, are receiving very low returns, a situation that has involved significant hardship for some.”

[quote]But then he goes all clever, and redefines savings so that we are no longer talking about income producing savings, the stuff that pensioners rely on, and instead we are now talking about home ownership, where low interest rates add up to lower mortgages. [/quote]

Related: Infographic: The Controversy Surrounding The US Federal Reserve System

As if this were not a sufficient sleight of hand, he then makes the point that “hey, no one can save if they don’t have a job, and fixing the economy (via accommodative monetary policy i. e. low interest rates) is the best way of getting people jobs and putting them in a position where they can save.” – This may be true, but it is somewhat irrelevant if you already have savings and your worry is that the Fed’s “low for longer” policy is taking the food off your table…

What this all adds up to is that the Fed is saying, quite plainly, that the US is in dire straits and savers are just going to have to take the pain until the economy starts to motor again and the Fed can start raising interest rates. Right now it has said quite plainly that it does not intend to raise rates until 2015. This is a deliberate ploy to “set expectations” about future rates. Again, who cares about savers and pensioners? Not the Fed, it seems…

Bernanke: redefining “savings” doesn’t make savers richer is republished with permission from the QFinance Blog. Get the QFinance Dictionary of Business and Finance iOS app for a comprehensive guide to financial terms and expressions.