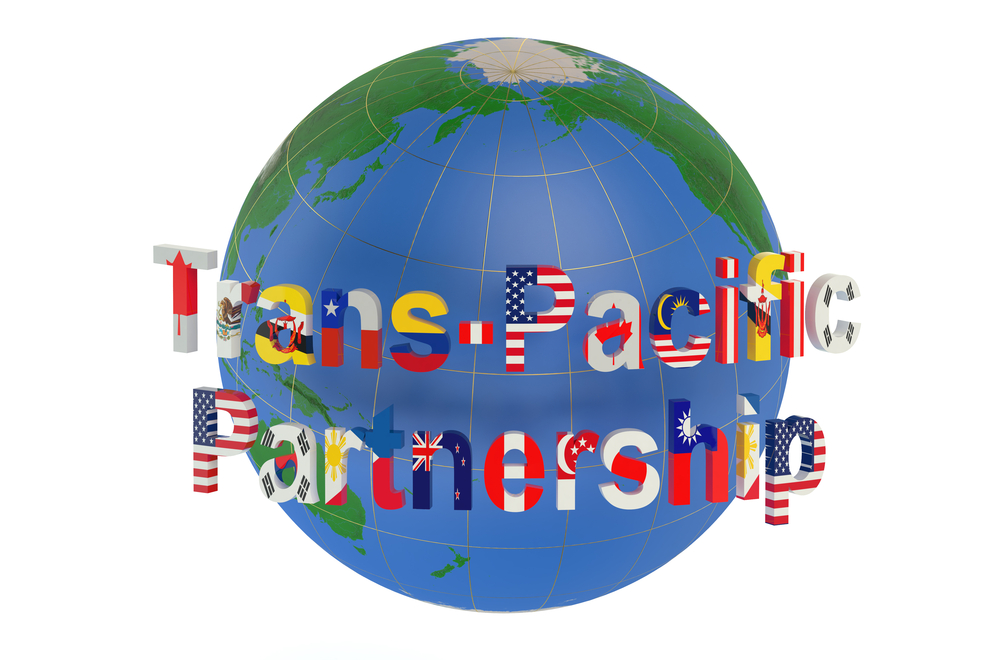 Donald Trump has been bashing free trade for much of his campaign. However, in recent weeks he’s taken his anti-trade tirades to a whole new level in lashing out at the Trans-Pacific Partnership (TPP), a deal that was signed by its 12 Asia-Pacific members but has yet to be ratified.

Donald Trump has been bashing free trade for much of his campaign. However, in recent weeks he’s taken his anti-trade tirades to a whole new level in lashing out at the Trans-Pacific Partnership (TPP), a deal that was signed by its 12 Asia-Pacific members but has yet to be ratified.

On June 22, he told a crowd in New York City that the TPP would “ship millions more of our jobs overseas – and give up congressional power to an international foreign commission.” Six days later, he claimed it would not only “undermine our economy, but it will undermine our independence. The TPP creates a new international commission that makes decisions the American people can’t veto.”

If that weren’t enough, he upped the ante in a campaign stop in Ohio later that day when he declared:

As researchers on the economics of trade and trade agreements, we wanted to zero in on a few of Trump’s claims and assess whether there’s any truth to them. In particular, will the TPP destroy millions of jobs and result in the loss of U.S. economic independence?

The impact on jobs

First, trade agreements are complex, and even the best forecasts about what will happen once they take effect can be wrong, let alone a strong claim that millions of jobs will be destroyed.

However, most importantly, there is little overall relationship between the level of trade barriers to which a country agrees and aggregate employment in that country. Rather, the effects of trade on employment are distributional: Some industries and occupations grow, while others shrink, with no net impact on the overall number of jobs.

The question, then, is whether the TPP will create better jobs than what we have today. Here, there is reason to be cautiously optimistic, especially for those workers most able to upgrade skills or move to regions or sectors that benefit from better market access to other TPP partners.

Relative to previous trade agreements that the United States has signed, the TPP is expected to have a large impact in areas in which the U.S. has a strong comparative advantage – especially digital trade, agriculture and tradeable services – which means that many of the new jobs will be good ones.

In contrast, previous waves of trade liberalization, including the Uruguay Round of the General Agreement on Trade and Tariffs (GATT), focused more on reducing barriers to manufacturing trade. Even though the TPP aims to completely phase out some of the remaining tariffs on manufactured goods among members, these barriers are already so low that the impact of further reductions on American workers is likely to be small. (This is not to minimize past job displacement, however.)

Combined with technological change and China’s accession to the WTO in 2001, lower tariffs contributed to the 18 percent decline in manufacturing employment between 2001 and 2007. Although most of these displaced workers found work in other sectors of the economy, research suggests that the new work paid less, on average.

On the other hand, the United States is likely to see increased output and employment in services and agriculture. The U.S. International Trade Commission (USITC) recently estimated that the service sector would see a US$42 billion increase in sales over the next 15 years due to the TPP, while the agricultural and food industries will gain $10 billion. That’s about five times the estimated $11 billion loss in sales of manufacturing, natural resource and energy output. The USITC estimates that these output gains may lead to a modest rise of around 130,000 U.S. jobs.

The most widely reported estimates of the economic impact of the TPP (see here or here) predict modest gains in annual real U.S. income. That’s because the TPP is expected to boost economic activities in which the U.S. has a comparative advantage. While it is important to note that these models are based on a host of assumptions about the global economy – some of which may turn out to be wrong – it is safe to say that the TPP is highly unlikely to lead to millions of job losses.

The question of whether the TPP threatens U.S. economic independence and congressional authority is most likely a reference to an element of the agreement known as the Investor-State Dispute settlement (ISDS).

In brief, ISDS is an arbitration procedure intended to resolve disputes between investors and TPP signatory countries. Most commonly, it is framed as a way for foreign investors to protect themselves against seizure of their assets by foreign governments.

Of course, there is little risk of such an extreme outcome (seizure of assets) for owners of U.S.-based assets given the country’s historical respect for property rights and the reliance on rule of law.

The concern for many TPP critics is that a foreign investor may claim that, for instance, the U.S. minimum wage constitutes a seizure of profits, and an arbitrator with corporate sympathies may then rule against the U.S. government. The fear is that, in this case, a ruling against the U.S. could force changes in its labor laws – thus eroding U.S. sovereignty and Congress’ legal authority.

However, this seems to be a misinterpretation of the TPP text. The White House has stated explicitly that ISDS cannot require changes in a country’s laws or regulations. It can only impose financial penalties.

Furthermore, over 50 trade agreements to which the United States is currently a signatory contain similar provisions for arbitration as part of a dispute settlement process. The White House points out that there have been only 13 cases brought against the U.S. over the 30 years spanned by those agreements, and each ruling was in favor of the U.S.

Most importantly, the TPP improves on existing ISDS language by increasing transparency, limiting investors’ ability to bring spurious cases and penalizing so-called “venue-shopping.” With so many ISDS provisions already in force around the world, the ISDS genie is out of the bottle.

The TPP offers a chance to roll out a new, narrower, more cautious approach to ISDS on a world scale. If successful, these revised ISDS provisions could ultimately replace the existing ISDS language that has (justifiably) come under fire in public discourse.

Both of Trump’s claims seem overblown.

First, while there is quite a bit of uncertainty associated with the TPP projections, it is difficult to support the claim that millions of U.S. jobs will be lost. The TPP will increase competition among the signatories in economic areas (for instance, finance and technology) in which the United States is a dominant player – and that should be a good thing for the U.S.

The truth is that trade agreements change the composition of jobs in the economy. Some workers will be happier with their new jobs, and others will not. Whatever the job losses from the TPP, a roughly equal number will be created.

Second, in theory the ISDS could be a disaster for governments that seek to enact or enforce laws and regulations that they believe are in the public interest but conflict with corporate interests. However, the TPP seemingly addresses these concerns, and the White House has detailed the many specific ways in which the TPP will go beyond previous agreements in order to protect against frivolous claims and threats to signatories’ sovereignty.

Claims about the impact of trade, and especially trade agreements, will continue to animate the ongoing presidential campaign. Given the importance of the topic, it is essential that claims be weighed against the evidence and that voters understand what trade can and cannot do.

Is Trump right that the TPP will destroy millions of jobs and cede US sovereignty? is republished with permission from The Conversation