The Value of Commodities Can Go Down As Well As Up…

The oil benchmark, Brent Crude, recorded its biggest ever one-day fall, dropping further toâ€¨â€¨ $105.15 a barrel and other commodities including copper, sugar, cotton and cocoa wereâ€¨â€¨ dragged down in their wake.â€¨â€¨ Oil’s sell-off may have been prompted by Thursday’s poor economic data from Europe and the â€¨â€¨US, together with evidence of monetary tightening in emerging economies, hurting speculators â€¨â€¨who had hoped to benefit from rising inflation and a weaker dollar.

Perhaps the economicsâ€¨â€¨ of Osama Bin Laden’s death had also brought with it improved prospects for calm in the Middle East. â€¨â€¨Whatever the reasons, ‘bull’ investors recorded big losses in an unseemly scramble for the exit,â€¨â€¨ only for Brent Crude Oil prices to later stage a recovery to over $110 by mid-afternoon on Fridayâ€¨â€¨– credited to ‘bargain hunters’ and the more positive jobs picture emerging from the US.

Some â€¨â€¨commentators view this merely as a ‘correction’ but others are less certain, such as Emmaâ€¨â€¨ Pinnock, energy analyst at Inenco, who expects oil prices to drop back below $100 a barrel:

[quote]â€¨â€¨“Ultimately the price increases that we saw of almost 12% since the beginning of 2011,â€¨â€¨ due to instability in the Middle East, the Japanese earthquake and the nuclear crisis, were â€¨â€¨not sustainable.[/quote]

“â€¨â€¨Does this indicate the end of a bull run which has driven the prices of many commoditiesâ€¨â€¨to record highs? This volatility matters to all of us, as the momentum created by upward orâ€¨â€¨downward swings in prices of commodities such as oil or gas, affects others included in index â€¨â€¨funds – including food.

And for the world’s poorest, the price of food represents the difference â€¨â€¨between health and starvation.â€¨â€¨ Various reasons are cited for these falls, described by one shattered analyst as “horrendous”.â€¨â€¨ Silver was the first commodity to collapse earlier in the week and some blame a steepâ€¨â€¨ appreciation in silver trading costs, prompting a speculative – and contagious – sell-off among â€¨â€¨other commodities.

â€¨â€¨However, according to Edward Meir, commodities analyst at broker MF Global in Newâ€¨â€¨York:

[quote]“This is one for the books: across the board you’re seeing a general unwinding of the â€¨â€¨commodity trade.” [/quote]

Indeed many point to the announcement made the day before by Glencore, â€¨â€¨the world’s biggest commodities trader, of a multibillion-dollar flotation.

For some this marks the â€¨â€¨peak for commodities, in much the same way as the initial public offerings of Goldman Sachs â€¨â€¨and private equity group Blackstone indicated the top of their respective markets.â€¨â€¨ Markets could recover rapidly: Although high prices may be denting commodities, farmers,â€¨â€¨ miners and oil companies alike still struggle to meet demand. 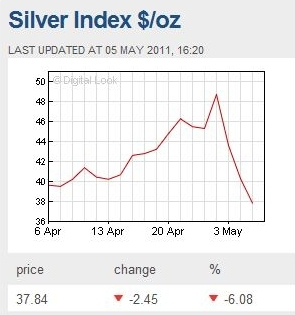 On the other hand, yet more â€¨â€¨negative economic news, such as lower-than-expected US growth figures for the first quarter,â€¨â€¨ could continue to subdue prices. Besides which QE2 is ending soon in the US – with no â€¨â€¨sign [yet] of QE3 – so that less liquidity in the markets may check demand for risky assets suchâ€¨â€¨as commodities. This nervousness is also indicated by bond markets, with the 30-year USâ€¨â€¨ Treasury yield at its lowest since early December and also explains a flight to the relative safetyâ€¨â€¨ of the dollar and the yen.â€¨â€¨

However not all commodities are the same. Many traders offer different prospects for different â€¨â€¨commodities, pointing at the unrest in Libya which may continue to impact on oil, while goldâ€¨â€¨ and silver remain supported by investors willing to buy during the dips.

Ultimately, rampant â€¨â€¨demand from the newly aspirant populations of India, China et al for everything from oil and â€¨â€¨wheat to pork bellies and gold, may support the demand for this planet’s finite resources.

The â€¨â€¨rare earth metals so in demand by the high tech industry were largely unaffected by last week’sâ€¨â€¨ drama.

‘Rare’ of course indicates the limited nature of supply – perhaps the same term willâ€¨â€¨ become true of other commodities we currently take for granted. â€¨â€¨If so, speculators will be happy and profit-takers may continue to dictate future ‘corrections’ – ifâ€¨â€¨that is all that is indicated by last week’s dramatics.

However, it offers scant relief for those hard-â€¨â€¨pressed families struggling to cope with mounting prices at the petrol pumps and supermarket â€¨â€¨tills.