In 2010, Qatar was the fastest growing economy in the world - ahead of Singapore and Turkmenistan, with a real GDP growth rate of 19.40 percent. Since 2008, Qatar has been consistently ranked among the top three fastest growing economies in the world. Analysts believe Qatar will continue its double-digit growth trend for the next few years on the back of rising oil and natural gas prices.

Qatar's oil and natural gas industries account for 50 percent of GDP, 85 percent of export earnings and 70 percent of the government's revenue.

According to 2010 statistics, Qatar produced 76.98 billion cubic metres of natural gas and an average of 1.213 million barrels of oil per day.

Prior to Qatar's discovery of oil in 1940, the country's economy was primarily focused on fishing and pearl diving. During World War II oil exploration in Qatar was temporarily discontinued. Then in 1949 oil exportation started again and its discovery in Qatar transformed it’s dormant society and economy into a thriving marketplace.

Despite a period of rapid growth between the '50s and '70s, Qatar’s reliance on oil meant it's economy faced a downturn during the 1980s to mid-1990s due to falling oil prices and reduced oil earnings. Qatar’s economy eventually recovered during the late 1990s, and has since boomed.

Qatar’s oil reserves are expected to run dry by 2023 according to estimates of its current rate of production. Consequently, the Qatari government has diverted its focus and resources to the production of natural gas.

At present, Qatar possesses 25.47 trillion cubic metres of natural gas in its proven reserves, which amounts to 15 percent of the world’s total reserves. Qatar has the third largest proven natural gas reserves in the world behind Russia and Iran.

Increased Liquefied Natural Gas (LNG) production in particular has driven Qatar’s recent rapid economic growth. With massive expansion projects still in the pipeline, Qatar’s LNG production is expected to grow exponentially once the projects are completed. Despite already being the world’s largest LNG exporter, Qatar also aims to double their current output of LNG by the end of 2011.

Japan's 2011 earthquake and tsunami disaster is also likely to increase Qatar’s LNG exports. As Qatar’s largest export partner, Japan consumes more than 25 percent of Qatar’s total LNG output. With reduced capabilities of Japan's nuclear power plants, the country will most likely turn to Qatar for their energy requirements as Japan recovers from the catastrophe. 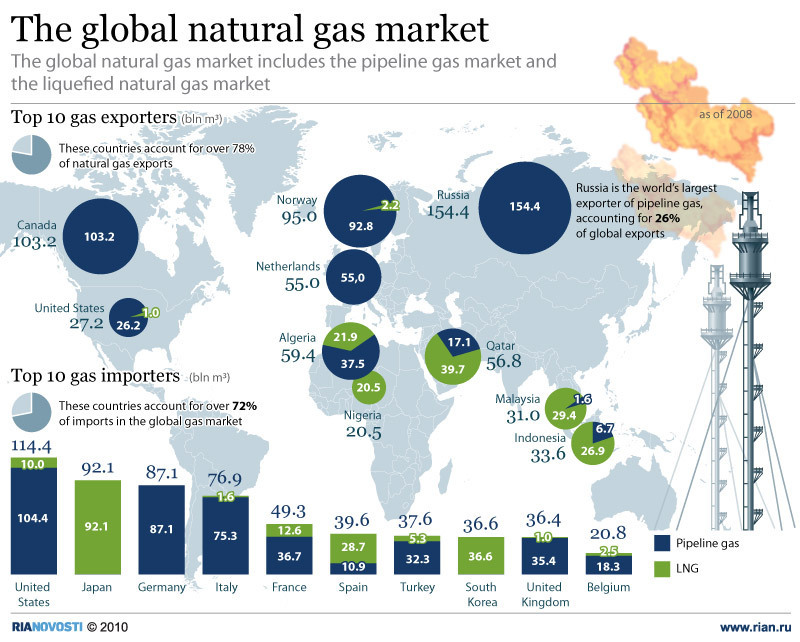 Qatar’s natural gas industry is an important element to their national vision for economic diversification. The economic downturn that Qatar faced during the '80s to mid '90s exposed the country's overdependence on the oil industry. Since then, Qatar intends to reduce it's reliance on oil through a three-fold process:

The Qatar Financial Centre established in 2005 provides a world class financial and business centre for international financial service institutions and major multi-national corporations. Qatar's successful bid to host the 2022 Football World Cup has also increased Qatar’s global profile and bring an influx of tourists to the country during the event.

The industrial sector remains Qatar’s key economic driver, 78.8 percent of Qatar’s GDP in 2010 was derived from the industry sector, while services and agriculture sectors contributed 21.1 percent and 0.1 percent to GDP respectively.

Qatar's rapid economic growth is led by its oil and gas industry, as well as other industries such as petrochemicals, steel and fertilisers. The country has maintained positive growth across all its industries. Industries Qatar (IQ) is the Middle East’s second largest chemical producer behind Saudi Basic Industries Organisations. The organisation has also invested in several expansion projects owing to annual profits of (estimated) US$2 billion.

Qatar had the world’s fastest industrial production growth rate in 2010, rising by 27.1 percent from the previous year. This followed double-digit growth trends from the past two years.

Qatar’s main exports are derived from the industrial sector. In 2010, Qatar’s total exports were valued at US$57.82 billion; LNG, petroleum products, fertilisers and steel are Qatar’s key export commodities.

Qatar operates with a trade surplus, however much of its revenues earned from exports are reinvested into imports that would help sustain Qatar’s rapidly growing economy. This includes machinery and transport equipment, food, and chemicals. The value of Qatar’s imports in 2010 was US$23.38 billion, with 14.43 percent of the imports coming from the US, 8.34 percent from Italy, 8.33 percent from South Korea, and 8.04 percent from Japan.

Qatar’s economic success contradicts its physical size. The smallest member of OPEC, both in land area and population, Qatar is also the third smallest state in the Middle East, behind Bahrain and Lebanon.

Located in the Persian Gulf, Qatar is a peninsula that shares its border with Saudi Arabia. Its capital, Doha, is situated in the east on the Persian Gulf and is home to 80 percent of Qatar’s population. The Salwa International Highway links Doha to Saudi Arabia and the upcoming Bahrain-Qatar Friendship Causeway will also facilitate transport between two of the largest financial centres in the Middle East.

As part of its economic planning, much of Qatar’s major industrial and urban developments have been built around major oil refineries and seaports. The principality of Mesaieed for example, contains Mesaieed Industrial City, which houses family accommodation as well as the main offices of Qatar Petroleum, Qatar Fertiliser Company, Qatar Steel, Qatar Petrochemical Company, Qatar Vinyl Company, Qatar Chemicals Company, and Qatar Aluminium.

Among the 1.7 million people currently residing in Qatar, it's estimated nearly three-quarters are foreign nationals with temporary residency status.

Foreign nationals also represented a large majority of Qatar’s 1.202 million labour force. According to a 2008 report by Qatar’s General Secretariat for Developmental Planning, 93 percent of the labour force were Non-Qataris.

In order to control the large influx of expatriate workers, Qatar introduced the "Qatarization" programme in 2000, whereby government departments and joint venture industries were encouraged to fill high-level positions within the organisation with Qatari citizens. As a result, a growing number of foreign-educated Qataris returned to take up key positions formerly occupied by expatriates.

This has caused tensions between the local and expatriate community as expatriates working in the public sector are not only being forced out of jobs, but also have less opportunities to get employed in public sector jobs that promise to triple the salary of private sector jobs.

Today, Qatar enjoys one of the lowest unemployment rates in the world, with only 0.5 percent of the labour force unemployed. No forecast has been made for the future, however historic data from the past 4 years suggests it's unlikely for any dramatic increase in unemployment. What is more clear though, is the influx of Non-Qataris expected to increase Qatar’s population growth over the next few years - with an annual growth rate forecasted between 3.97 to 4.03 percent from 2010 to 2014, reaching a total population of 2.068 million people in 2015.

Read more on Qatar's economy, including forecasts and trade statistics on EconomyWatch below.