Located centrally in Europe, Belgium is the founding member of the European Union. Belgium covers an area of 30,528 square km and has a population of about 10.7 million. Belgium shares its borders with France, Germany, the Netherlands and Luxembourg. Belgium’s economy, just like its transportation, is well integrated with Europe and rest of the world. The Belgian economy is characterized by a highly productive workforce and high GNP. Being the first country to have undergone an industrial revolution in Europe, Belgium’s economy was able to capitalize on the nation’s central location. Almost three quarters of Belgian trade is within Europe.

Belgium struggles with scarcity of raw materials and is reliant on the global market for imports. The account deficit widened to 4% in 2009, following the recession, and exposed the vulnerability of the Belgian economy. Public debt was almost 100% of the GDP. In 2009, the Belgian economy faced a contraction of 3.4 points and unemployment rose slightly. The other worrying area is the aging population and increasing social expenditure that might push the authorities to undertake more austerity measures. However, the Belgium economy has been able to score well in terms of GDP (purchasing power parity), even with all the vulnerabilities. Here is how the Belgian economy has performed over the past few years (in millions): 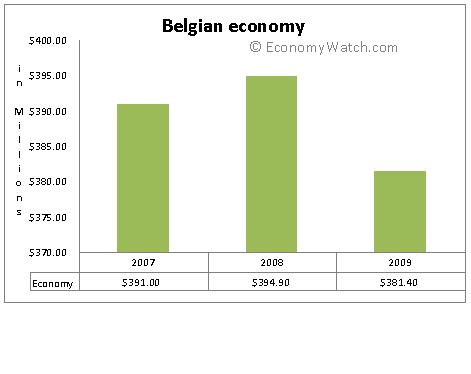 The real growth rate has followed the mentioned trajectory (in percent): 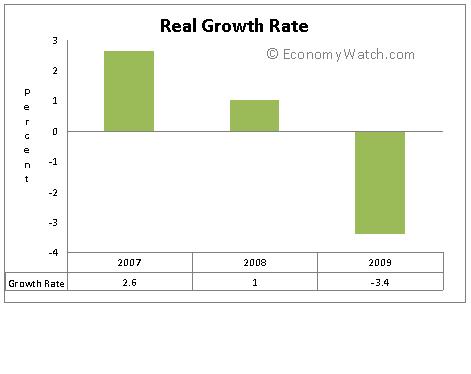 In terms of GDP contribution, services contribute the maximum, followed by industry and agriculture. This is what the contributions look like (2009 est.):

Belgium has a labor force of 5.01 million, almost 73% of which is absorbed by the services sector, followed by industry at 25% and agriculture sector at 2%.