Thunder Road: Sparking a Revival for the Electric Car 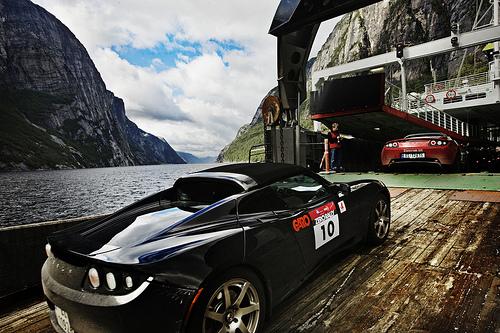 In the new film, electric vehicles, such as the Chevy Volt, Nissan Leaf and Tesla Roadster, are returning to production after being scrapped just a few years ago. Paine – who owns all three of these cars - took a gamble when he began filming that the cars would all sell successfully. And he was proved right. At the moment of release at the start of summer, Nissan’s Leaf had sold out, and GM’s Volt was back-ordered for six months. Both companies are revamping their factories to cope with anticipated rises in demand in 2012.

The Tesla Roadster was also doing pretty well. It had sold about 1,500 Roadsters in April, a figure Paine expects to rise steeply as the electric car becomes a mainstream option.

“I’m bullish about the electric car at the moment,” he said. “I don’t think they will replace gas cars totally, but I do think they could become a huge chunk of the market in our lifetime. I think we’re seeing a revolution.”

Although it is difficult to estimate the size of the market, Paine says there are around 200,000 early adopters in the US and only 40,000 to 50,000 cars available. In the film, Nissan’s Carlos Ghosn predicts that EVs could become 10% of the market by 2020.

These optimistic predictions are a far cry from the scenario in Who Killed the Electric Car? Paine’s first film lashed out at several major carmakers, including Ford, Toyota and Honda. But it reserved its greatest censure for General Motors, which terminated production of its EV1 car.

GM claimed there was not enough consumer demand for the EV1, but Paine’s film attempts to refute this excuse. It alleges that there were darker motives afoot. It contends that oil companies were afraid of losing their monopoly on transportation fuel over the coming decades, while the auto companies feared short-term costs for EV development and long-term revenue loss because EVs require little maintenance and no tune-ups.

Whatever the reasons, GM - which had produced about 1,000 EV1s - began systematically recalling them. They were normally shipped straight to the car crusher to be destroyed. Some electric car enthusiasts were so angry that they maintained a vigil at a padlocked GM lot in Burbank where the last 78 EV1s were locked away.

The film rapidly developed a cult following and GM became so worried about potential damage to its image that it ran full-page newspaper ads to circulate its version of the story, and also paid for sponsored links on Google.