•
Markets
•
by
Mario Blejer a… 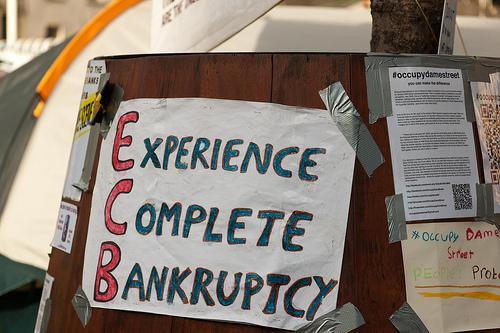 The ECB's recent decision to lend unlimited funds to eurozone commercial banks at very low rates acknowledges the need to address a core drawback in the euro-architecture: the ECB itself. However the banks use the money, it is now clear that the eurozone’s future will be determined largely by the ECB.

BUENOS AIRES – Many observers have recently declared that the eurozone debt crisis is practically resolved, or at least on hold for a few years. The falling yields at the Italian government’s last bond auctions in 2011 suggested a significant reduction in the perceived sovereign-default risk. Since Italian bonds are regarded as the bellwether of the crisis, many interpret this is a sign that the European debt market is normalizing.

The “solution” to the crisis was putatively facilitated by the European Central Bank’s decision to lend unlimited funds to commercial banks for three-year terms at very low rates. But a central bank would normally do even more to fulfill its role as lender of last resort. So why all the renewed optimism?

The immediate answer is that national banks will now use the scheme to borrow cheaply from the ECB and invest in short-term sovereign bonds, using the interest-rate spread to create a profitable “sovereign carry trade.” Despite the inefficiencies and distortions arising from such monetary financing, the ECB may indeed provide some breathing space for governments.

Related: ECB Gives Out A Record $640bn In Loans

But the real reason why this otherwise standard policy decision seems like such an important step is that, for the first time, the ECB has recognized the need to address a fundamental flaw in the eurozone’s architecture: the ECB itself.

At the core of the problem is currency. In the 1990’s, emerging-market crises were first and foremost currency crises: sharp corrections of overvalued currencies that bankrupted public and private sector debtors.

By contrast, the currency issue in the European crisis is difficult to pinpoint. Is Italian euro debt denominated in local or foreign currency? Whose currency is the euro? And whose central bank is the ECB? These questions are key to the European predicament. Indeed, the possible answers suggest two very different versions of the eurozone.

One version of the eurozone conceives it as a unity, externally and fiscally balanced, and with a fully functioning monetary union. It is also heavily indebted, but in domestic currency. The alternative conception assumes that the eurozone is a group of individual countries within a common currency area. Most of the countries are unbalanced and are indebted in a currency (the euro) that they cannot print on demand. This is equivalent to foreign-currency debt.

In the first version (the euro crisis minus the currency problem), the scenario looks more like the United States than like Latin America in the 1990’s (with Italy resembling California rather than Argentina). In the second version, however, the eurozone saga is comparable to the emerging markets’ story. Like a dysfunctional family, the northern “advanced” countries ponder whether or not to bail out the southern “emerging” economies.

The prognoses for each case are starkly different. In the former version, interest rates converge and the default risk is nil, because, with the ECB backstopping its members’ liabilities, as the Federal Reserve does in the US, the euro becomes “local currency.” And how often do we hear about sovereign restructurings of local-currency debt?

In the latter version of the eurozone, there is differential credit risk and, ultimately, bank runs, de-euroization, and default: the common currency is at odds with the needs of the member states.

Which of these two alternatives should prevail is a question for eurozone members to decide. But two things are clear. First, the eurozone’s future will be determined largely by the ECB’s role. Second, there is little flexibility – European policymakers cannot overcome the crisis if they do not eliminate the currency problem and the resulting default risk.

This helps to explain the misgivings about the International Monetary Fund’s massive aid to the region. Why would the IMF lend Europe special drawing rights (the Fund’s unit of account), rather than euros, thereby creating a currency imbalance? Such an imbalance is at the root of all emerging-market crises; the IMF’s actions therefore suggest that Europe is already giving up on the euro.

Related: Why The IMF Must Stay Out Of Europe’s Crisis: Mario Blejer & Eduardo Levy Yeyati

Today, the euro faces a fork in the road. One route, a currency area without sovereign backstopping, will lead to debt, currency crises, and the eurozone’s dissolution. The other, a monetary union with a proper central bank, internal fiscal transfers, and active, regionally-oriented monetary policy, will lead to a slow but steady recovery without default.

Clearly, to paraphrase Robert Frost, the road taken will make all the difference. For that reason, the euro’s fate lies not in Athens, or in Rome, but at the ECB’s headquarters in Frankfurt.

Mario I. Blejer is a former governor of the Central Bank of Argentina and former Director of the Center for Central Banking Studies at the Bank of England. Eduardo Levy Yeyati is Professor of Economics at Universidad Torcuato Di Tella and Senior Fellow at The Brookings Institution.