Prior to the 1980s, Australia was considered to be a relatively closed and protectionist economy. However, key economic reforms that were introduced by the Australian government since 1983 has transformed Australia into an open, export-oriented market economy. These reforms include reducing high tariffs, removing some non-tariff barriers, floating the Australian dollar, deregulating the financial services sector, increasing efficiency between the federal and state branches of government, privatizing government-owned industries, and reforming the tax system.

Today, Australia has a stable and modern institutional and regulatory structure that has enabled it to achieve sustained economic growth for the past two decades. Australia was ranked third in the 2011 Economic Freedom Index behind Hong Kong and Singapore and continues to provide an ideal environment for business and environment.

According to former Australian Prime Minister Kevin Rudd, Australia is a nation whose origins lie firmly in the west, “but whose geo-political and geo-economic circumstances are shaped in large part by our location in the east… this is the inescapable expression of the Australian condition.”

The contrast between these two regions has often led to disagreements within the Australian government over developmental plans. Although Australia’s GDP is still dominated by its service and financial industries, these industries have been struggling in recent years. On the other hand, Australia’s resources and commodities industries are currently experiencing a boom. According to Canberra-based Access Economics, growth in regions endowed with minerals and oil and gas will far outstrip growth in the country’s more populous states next year. However, concerns have also been raised on whether the resource and commodities industries are too reliant on exports to China. 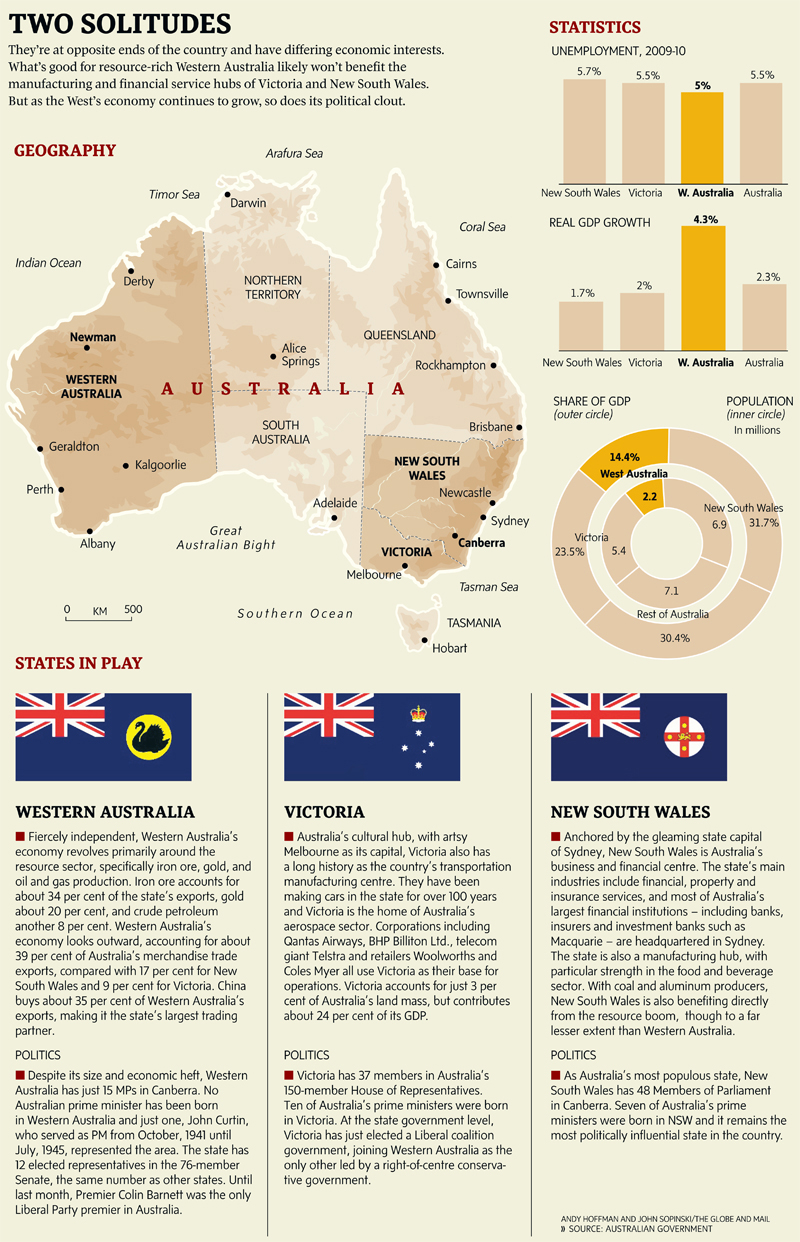 According to Australian Treasurer and Deputy Prime Minister, Wayne Swan, the May 10 budget for 2011 is expected to create 500,000 jobs in two years and is aimed at bringing unemployment rates down to 4.5 percent.

However, Australia’s main labour problem is not the lack of jobs available. Rather, there is a lack of skilled workers who are able and more importantly, willing to work in Western Australia and the mining industry in particular. Although mining is currently the fastest growing and best performing industry in Australia, it is an unattractive option for young Australian employees due to the nature of the work. According to the Australian Mineral and Mines Association, even monetary incentives have not been able to attract workers to the industries. Therefore even as Australian Treasurer Wayne Swan promises new jobs for Australians, the Australian budget for 2011/2012 has also allocated the need for 16,000 skilled migrants to work in the resources and commodities industries in order to maximise the payoff from the resources boom.

As with most advanced economies, Australia has a dynamic service sector. This includes industries such as banking, insurance and finance; the media and entertainment industries; consulting, tourism and retail; services provided by government, such as education, health and welfare; and other personal and business services.

Among these industries, banking, finance and insurance are the best performers; providing the highest gross-value as well as being among the fastest growing industries in Australia. The Australian share market is the second largest in the Asia–Pacific region behind Japan, based on free-float market capitalisation. The Australian Securities Exchange is also the 11th largest stock exchange in the world going by market capitalisation.

While the service industry remains the backbone of Australia’s economy, Australia’s mining industry has been the catalyst for economic growth in the past decade. Large quantities of minerals and resources can be found in Australia. Australia has the world’s largest resources of recoverable brown coal, lead, rutile, zircon, nickel, tantalum, uranium and zinc, and ranks second in the world for bauxite, copper, gold, ilmenite and silver. Iron ore is another extremely valuable asset, with high demand from China.

Read more about Australia's economy, including forecasts and trade statistics on EconomyWatch below.