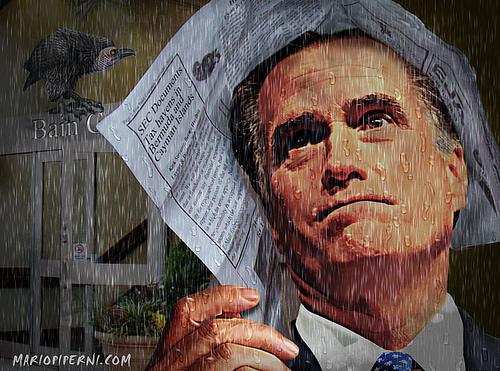 Mitt Romney may not be a tax evader, but he certainly is a tax avoider on a grand scale. And the problem is not just Romney; writ large, his level of tax avoidance makes it difficult to finance the public goods without which a modern economy cannot flourish – and weakens the bonds of trust that hold a society together.

NEW YORK – Mitt Romney’s income taxes have become a major issue in the American presidential campaign. Is this just petty politics, or does it really matter? In fact, it does matter – and not just for Americans.

A major theme of the underlying political debate in the United States is the role of the state and the need for collective action. The private sector, while central in a modern economy, cannot ensure its success alone. For example, the financial crisis that began in 2008 demonstrated the need for adequate regulation.

Moreover, beyond effective regulation (including ensuring a level playing field for competition), modern economies are founded on technological innovation, which in turn presupposes basic research funded by government. This is an example of a public good – things from which we all benefit, but that would be undersupplied (or not supplied at all) were we to rely on the private sector.

Conservative politicians in the US underestimate the importance of publicly provided education, technology, and infrastructure. Economies in which government provides these public goods perform far better than those in which it does not.

But public goods must be paid for, and it is imperative that everyone pays their fair share. While there may be disagreement about what that entails, those at the top of the income distribution who pay 15 percent of their reported income (money accruing in tax shelters in the Cayman Islands and other tax havens may not be reported to US authorities) clearly are not paying their fair share.

Related: The Curse Of The Treasure Islands: How Tax Havens Are Sinking Europe’s Economy

Democracies rely on a spirit of trust and cooperation in paying taxes. If every individual devoted as much energy and resources as the rich do to avoiding their fair share of taxes, the tax system either would collapse, or would have to be replaced by a far more intrusive and coercive scheme. Both alternatives are unacceptable.

More broadly, a market economy could not work if every contract had to be enforced through legal action. But trust and cooperation can survive only if there is a belief that the system is fair. Recent research has shown that a belief that the economic system is unfair undermines both cooperation and effort. Yet, increasingly, Americans are coming to believe that their economic system is unfair; and the tax system is emblematic of that sense of injustice.

The billionaire investor Warren Buffett argues that he should pay only the taxes that he must, but that there is something fundamentally wrong with a system that taxes his income at a lower rate than his secretary is required to pay. He is right. Romney might be forgiven were he to take a similar position. Indeed, it might be a Nixon-in-China moment: a wealthy politician at the pinnacle of power advocating higher taxes for the rich could change the course of history.

But Romney has not chosen to do so. He evidently does not recognize that a system that taxes speculation at a lower rate than hard work distorts the economy. Indeed, much of the money that accrues to those at the top is what economists call rents, which arise not from increasing the size of the economic pie, but from grabbing a larger slice of the existing pie.

Related: Obama vs. Romney – Does It Really Matter To The Economy?: Mohamed El-Erian

Those at the top include a disproportionate number of monopolists who increase their income by restricting production and engaging in anti-competitive practices; CEOs who exploit deficiencies in corporate-governance laws to grab a larger share of corporate revenues for themselves (leaving less for workers); and bankers who have engaged in predatory lending and abusive credit-card practices (often targeting poor and middle-class households). It is perhaps no accident that rent-seeking and inequality have increased as top tax rates have fallen, regulations have been eviscerated, and enforcement of existing rules has been weakened: the opportunity and returns from rent-seeking have increased.

Today, a deficiency of aggregate demand afflicts almost all advanced countries, leading to high unemployment, lower wages, greater inequality, and – coming full, vicious circle – constrained consumption. There is now a growing recognition of the link between inequality and economic instability and weakness.

There is another vicious circle: Economic inequality translates into political inequality, which in turn reinforces the former, including through a tax system that allows people like Romney – who insists that he has been subject to an income-tax rate of “at least 13 percent” for the last ten years – not to pay their fair share. The resulting economic inequality – a result of politics as much as market forces – contributes to today’s overall economic weakness.

Romney may not be a tax evader; only a thorough investigation by the US Internal Revenue Service could reach that conclusion. But, given that the top US marginal income-tax rate is 35 percent, he certainly is a tax avoider on a grand scale. And, of course, the problem is not just Romney; writ large, his level of tax avoidance makes it difficult to finance the public goods without which a modern economy cannot flourish.

But, even more important, tax avoidance on Romney’s scale undermines belief in the system’s fundamental fairness, and thus weakens the bonds that hold a society together.

Do you have a strong opinion on this article or on the economy? We want to hear from you! Tell us what you think by commenting below, or contribute your own op-ed piece ateditorial@economywatch.com.