Who Will Win The War Over Financial Regulations? 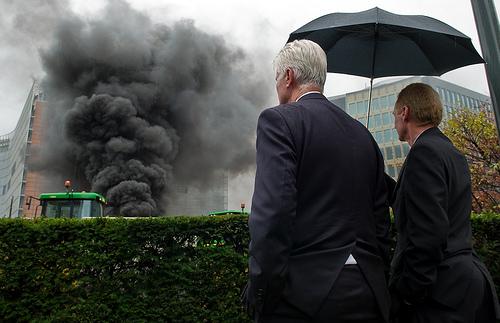 As the world continues to clamp down on untamed speculative finance, disagreements between nations, global banks and financial institutions are likely to intensify. At the same time, the financial sector, and its lobbyists, will be doing all they can to adulterate, block or water down any reforms. Can any of the reforms stick, or will they ultimately have the perverse effect of increasing, and not decreasing, financial instability?

The spirit of global co-operation and desire for a harmonized set of global financial rules to prevent further blow-outs that pervaded around the time of the G20’s Pittsburgh summit of September 2009 has, to a large extent, evaporated. As we enter 2012, I suspect the climate of rancour and disagreement between nations, global banks and financial institutions will intensify. In such an environment, the finance sector is arguably finding it easier to play different jurisdictions off against each in the hope of creating loopholes in the tightening regulatory net.

There have, of course, been positive developments in recent months. These have included the global push to boost bank capital ratios under Basel III, boosting reporting transparency and reining in systemic risk. We are also seeing the phasing in of a legion of new oversight bodies, including the US’s Financial Systemic Oversight Council, the UK’s Prudential Regulatory Authority, and the Paris-based European Securities and Markets Authority.

These are welcome reforms, and more are in the pipeline. These include a new reporting regime for larger US-based hedge funds aimed at identifying sophisticated or high-frequency trading across multiple venues in high volumes and at fast speeds, and a requirement that US banks with $250bn or more of non-bank assets submit “living wills” by July 1, 2012. The Financial Stability Board's new chairman Mark Carney is making encouraging noises on liquidity and the shadow banking system.

Related: Can The Financial Stability Board Live Up To Its Name? :Olin Wethington

Related: Can The “Wild Beast of Finance” Be Tamed?

It would be wrong to say that attempts to introduce better financial regulation are going smoothly. The coming 12 months are likely to be characterised by further attempts by the financial sector, and its lobbyists, to adulterate, block or water down reforms. They will also be characterised by much flawed thinking from regulators and policymakers. In their desire to rein in finance, they will risk creating over-emphasizing rules that will only reinforce the 'tick box' culture towards risk management and compliance that fuelled the crisis of 2007-09, as opposed to principles.

The pseudonymous New York-based investment banker The Epicurean Dealmaker summarized the problem in a blog post titled You’re Doing it Wrong, published in October last year. He said that in the US, financial lobbyists have turned the Dodd-Frank Act, first passed by Congress in July 2010, into a dog’s dinner of potentially unenforceable rules. He argued that a principles-based, or “heuristic”, approach would have been far more likely to have worked. The Epicurean Dealmaker wrote:

Writing in the Financial Times, Annette Nazareth and Gabriel Rosenberg of law firm Davis Polk and Wardwell recently warned that, while the complexified Volcker rule is still supposedly scheduled to take effect in July 2012, “the strong public response to the rule’s complexity and burden will pressure regulators to go back to the drawing board and repropose.”

However, partly thanks to vociferous lobbying by a cartel of investment banks with much to lose, but also thanks to the sheer, mind-numbing complexity of the task in hand, these broad principles are rapidly turning into a morass of pernickity rules, and ambitious deadlines are likely to be missed. And to make matters worse, it looks like certain Asian jurisdictions may fail to implement the reforms, enabling financial players to sidestep the reforms through regulatory arbitrage.

The reforms may ultimately have the perverse effect of increasing, not decreasing  financial instability. ProPublica’s Jesse Eisinger outlined some of the hazards:

“We have an explosion of clearinghouses … Dodd-Frank implicitly supports this ‘let a thousand flowers bloom’ approach ... A multiplicity of small ones is dangerous, according to Frank Partnoy, a professor of law and finance at the University of San Diego. The fragmentation means that safety is likely to be an illusion."

Despite the FSA’s  “see no evil” approach to high-level ‘white collar’ crime in the UK market and David Cameron’s much grandstanding approach towards Brussels, the outlook for financial regulatory reform in Britain is marginally more promising than in the US. Cameron’s government declared on December 19, 2011 that it would fully implement the banking reforms proposed by Sir John Vickers’ Independent Commission on Banking (ICB). In a speech to the House of Commons, Chancellor of the Exchequer George Osborne said:

“We want to separate high street banking from investment banking to protect the British economy, protect British taxpayers and make sure that nothing is too big to fail.”

Osborne confirmed that banks will have to fully ‘ringfence’ their retail banking services from their investment banking activities – and that the latter would no longer be eligible for government bailouts. In line with ICB recommendations, Osborne added that “large ring-fenced retail banks” would be required to hold equity capital of at least 10 percent, and that banks must hold capital to absorb losses of 17 percent of risk-weighted assets.

Although far from perfect (they don’t, for example, even touch on cultural or ethical issues), the Vickers reforms are a step in the right direction.  The UK government intends to issue a detailed white paper on the reform package in the spring of 2012 after a consultation period that ends in March.  There will be plenty of further lobbying and bloodcurdling scaremongering from the likes of Barclays and HSBC. But RBS has already partially pre-empted the reforms by saying it will shut down large parts of its underperforming investment banking business.

The scope for controversy as the world seeks to clamp down on untamed, speculative finance is huge. The risk that activities will get pushed out into the poorly monitored "shadow banking" system are immense. But nobody that I am aware of is advocating a return to the near-regulatory vacuum that existed in some parts of the world prior to 2008.

The recent tussle between Britain and France/Germany over opt-outs from EU financial regulation demonstrates that international differences over the re-regulation of finance will, if anything, intensify. The danger is this will lead to another patchwork quilt which will facilitate regulatory arbitrage and penalise nations that impose the toughest clampdowns.

2012: The Year Ahead – Winners and losers in the war over financial regulation is republished with permission from the QFinance Blog. Get the QFinance Dictionary of Business and Finance iOS app for a comprehensive guide to financial terms and expressions.

See also: Is Corporate Regulation Protecting Consumers or Making Life Harder?See also: Can The Financial Stability Board Live Up To Its Name? :Olin Wethington