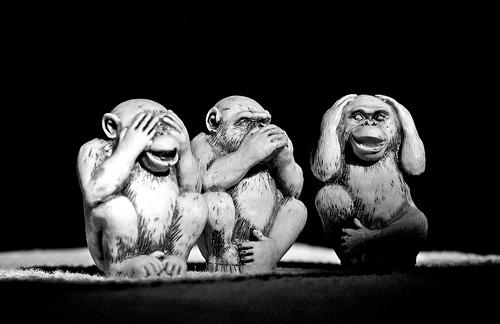 The UK’s financial regulatory bodies have shown a surprising "hear no evil" attitude to criminality in its banking and financial sector. At times, the financial regulators almost seemed to want to pretend that criminality and fraud didn't, or couldn't exist in the domain they are supposed to police. Unless this issue is addressed, London risks losing its mantle as a world leading financial centre.

Ever since its first failure became apparent with the collapse of Northern Rock in September 2007, the UK's Financial Services Authority has shown a remarkable lack of introspection or contrition about its own pre-crisis role. The reported attempts to brush the 2008 near-wipe-out of Royal Bank of Scotland under the carpet, via a 480-page report blaming RBS's failure on the global financial crisis and Johnny Cameron, while skirting around the roles of chief executive Sir Fred Goodwin and chairman Sir Tom McKillop, is just another symptom of the culture of cover-up and denial at the Canary Wharf-based institution.

Depressingly, it appears that the same culture of circling the wagons to protect the rich and powerful looks set to permeate the successor bodies that are due to replace the FSA in early 2013.

Related: The Grand Charade Of UK’s Most Dangerous Banker

The FSA's Hector Sants and Martin Wheatley, managing director of its consumer and markets group and a former Hong Kong regulator, appeared before the Treasury select committee of the UK's House of Commons on November 1, alongside FSA chairman Lord (Adair) Turner and interim managing director (conduct of business unit) Margaret Cole.

Ostensibly the session was about the government’s program for scrapping the FSA and replacing it with the Prudential Regulatory Authority and Financial Conduct Authority. The FCA, which was originally going to be called the Consumer Protection and Markets Authority, will focus "on the use of firms as a conduit for financial crime", and the PRA will come under the Bank of England and be responsible for "macro-prudential oversight" of the markets and institutions (the former is to be run by Wheatley and the latter by Sants).

What disturbed me the most about the November 1 session was the regulators' seeming nonchalance about criminality in the UK's banking sector. At times, using the tortured and obfuscatory phraseology, the financial regulators almost seemed to want to pretend that criminality and fraud didn't, or couldn't exist in the domain they are supposed to police. This struck me as very strange.

The regulators present in the Treasury committee hearing were all aware of Thames Valley Police's ongoing Operation Hornet investigation into money-laundering, corruption and large-scale fraud involving the corporate lending division of HBOS (now part of Lloyds Banking Group). Sants & Co must also be aware that, in a desperate pursuit of profits, several banks and financial institutions in the City that have "gone rogue". They will also be aware of high-profile cases such as that of the UBS "rogue" trader Kweku Adoboli. Against this backdrop, their "hear no evil" attitude to criminality in the banking and financial sector was bizarre.

Instead of seeking to root-out criminality, the FSA's executives speaking at the Treasury committee hearing expressed a strong preference for cosy backroom deals – in which  financial wrongdoers are coerced into agreeing to lifetime bans from working in the financial sector, often in exchange for an agreement from the FSA not to make any further investigations.

Related: Inside The Mind Of The UBS 'Rogue' Trader

These are exactly the sort of deals that the FSA has already struck with former head of investment banking at RBS Johnny Cameron, and which it has attempted to reach with Peter Cummings, the former head of corporate lending at HBOS. But to me at least such deals are a travesty of regulation.

The main reason the FSA likes them as they are enables the regulator sweep high-level under the rug. But their consequence is that many of the "white collar" criminals, whose deeds undoubtedly precipitated financial collapse, continue to play their trade in the City and the chances of cathartic prosecutions recede further and further into the distance.

So what of the detail of the Treasury committee session? The FSA executives told the MPs that they did not favor the drafting of any further criminal laws on the mismanagement of banks and financial institutions, beyond the existing powers to prosecute for fraud or deliberately mislead the market. And according to the Hansard transcript of the session, Cole said:

My jaw hit the floor at this point. The committee's chairman, Andrew Tyrie MP, then asked Cole how many bankers have been found guilty of offences, which under the FSA's proposals, would be likely to lead to a prison term? Cole replied:


"If there were to be a criminal offence relative to behavior of bankers and the running of banks, that would require new legislation. It is not framed in this current draft legislation.”

Jesse Norman MP, taken aback, reminded the regulators of their earlier affirmations that more “proper accountability” is needed. Norman said: “One thinks of HBOS, which fired its head of risk before going bust, and similar concerns at the RBS. These executives are very highly paid and they bear very large private and public responsibility, so my question for you, Mr. Wheatley, is would you support making certain actions into criminal offences? For example reckless mismanagement of a financial institution?"