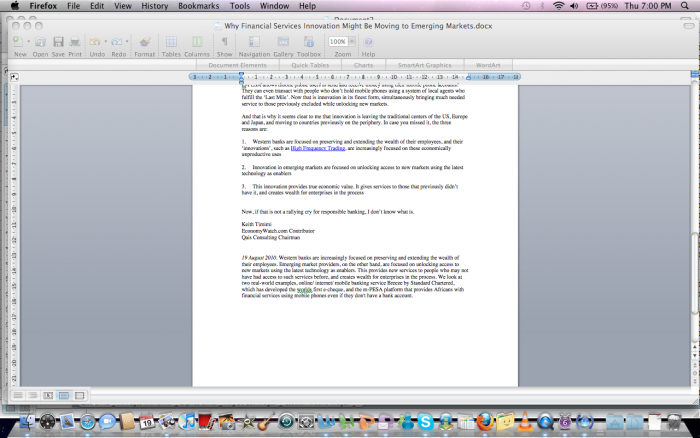 Let me go out on a limb and make a prediction; innovation in financial services will increasingly move to emerging markets as the ‘developed’ world continues to grapple with Too Big To Fail banks that need to maintain the payment of large amounts of profit to their ‘talent’ (a third or a half of profits being ‘invested’ this way is not uncommon), in markets that are stagnant or declining.

Emerging market banks have the opposite challenge. Described in business terms, we would talk about capturing rapidly growing markets segments, particularly those vast low income markets where financial services may have been entirely informal in the past. My colleague David talked about some of this in his excellent article on new strategies to capture emerging middle classes yesterday.

It is true that one of my friends (a former banker who shall remain nameless!) said rather unkindly that actually emerging market banks are jealous of their TBTF brethren and want to grow themselves into the too-big-to-fail/ backstop-me-and-give-me-cheap-unlimited-finance category in the next crisis. But look, I am an optimist, so I shall choose to believe that instead they have taken recent lessons to heart and they are out to build more sustainable businesses.

So let us focus on the present. What they are doing right now is innovating, and in particular, re-thinking banking and using technology to bring new financial services to rapidly growing markets. Yes, western readers, you heard that right. Focusing on bringing new services to customers, not using taxpayer money to stay alive, and not on how to continue to pay outsize bonuses while cutting credit lines to small businesses and households.

I have been thinking more this topic recently, both due to my involvement with Economy Watch, and through my work at my day job in internet marketing. There I have been working with Standard Chartered Bank on the launch of their new online, mobile and internet banking service, Breeze by Standard Chartered.

Standard Chartered is listed in the UK, but has only focused on emerging markets for the last 150 years or so. It is not well known as a result, but that postioning now seems prescient.

This is surely the time for someone like Standard Chartered to shine. To the best of my knowledge, it has avoided the proprietary trading/ derivatives shenanigans that have afflicted Wall St. It focused on access and community banking, enshrined in its new positioning tagline, Here For Good. And it is now looking to play on the world stage, best embodied perhaps in its new deal to sponsor the shirts of that global (albeit troubled) icon, Liverpool FC.

One of the first things you notice about their new Breeze platform is that it looks like it has been developed in Silicon Valley. The interface looks more like something from mint.com than it does a bank, and yet it has been developed in Singapore. It is also home to a world first, the e-cheque or e-check (depending on whether you prefer real English or Americanish). This service allows you to sign a cheque electronically on your computer or iPhone. Standard Chartered (or SCB for short) will then automatically print and mail that cheque for you. Millions of customers rely on cheques out of necessity, and this type of innovation can turn what has been a peripheral service such as mobile banking into their new standard operating procedure.

Indeed, a report just out by Juniper Research states that there will be 150m mobile banking users worldwide by 2011. Personally, I think this number is understated because it is focusing on mobile phone users who log in to an internet banking service.

Mobile banking has been turned on its head by services that allow mobile phone users to transfer money using their phones alone. This service is growing rapidly in emerging markets and started in Kenya, most notably through the M-Pesa service.

The key insight here is that is it much easier for less affluent people to get a mobile phone account than a bank account. A traditional credit rating score will say that these billions of people are not worthy of credit and therefore can’t get a bank account. But if they prepay for mobile phone credits, then in fact their credit is golden. (Don’t forget that credit rating agencies are part of the cause of the Financial Crisis using a business model that is questionable at best.)

M-Pesa allows mobile phone users to send and receive money using their mobile phone accounts. They can even transact with people who don’t hold mobile phones using a system of local agents who fulfill the ‘Last Mile’. Now that is innovation in its finest form, simultaneously bringing much needed service to those previously excluded while unlocking new markets.

And that is why it seems clear to me that innovation is leaving the traditional centers of the US, Europe and Japan, and moving to countries previously on the periphery. In case you missed it, the three reasons are:

1.     Western banks are focused on preserving and extending the wealth of their employees, and their ‘innovations’, such as High Frequency Trading, are increasingly focused on these economically unproductive uses

2.     Innovation in emerging markets are focused on unlocking access to new markets using the latest technology as enablers

3.     This innovation provides true economic value. It gives services to those that previously didn’t have it, and creates wealth for enterprises in the process

Now, if that is not a rallying cry for responsible banking, I don’t know what is.