The Return Of Abenomics: A New, Old Hope For Japan’s Economy? 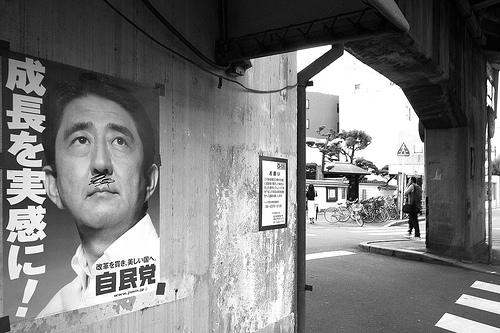 The ascent to power of the Democratic Party of Japan marked the end of Japan's one-party state, dominated by the Liberal Democratic Party since 1955. However, the DPJ was unable to address the challenges Japan faced, was internally unstable, and spent scarce political clout to support a controversial retail sales tax increase – ensuring the subsequent return of the LDP and Shinzo Abe in the 2012 general election. Given a second chance, how will the LDP fare?

The LDP has returned to power. Its ascent is a victory for the old elite. Reports suggest that half of the cabinet positions were given to members of parliament who had inherited their Diet seats from their families. The LDP's program, or Abe-nomics as it has been dubbed, seeks to strengthen the domestic economy and enhance Japan's ability to project its power internationally.

The LDP program has three components: monetary policy, fiscal policy and nationalism. It is monetary policy that most recently has captured the imagination of observers and investors alike. Essentially, the Abe government wants the Bank of Japan to be more aggressive. The BOJ adopted a 1 percent inflation target in early 2012, which is missed in 2012, as deflation still is evident (as it has been for around 15 years). The government wants a 2 percent target. The BOJ is set to debate increasing its inflation target at the next board meeting (Jan 21-22)

The Abe government also wants the BOJ to adopt an open-ended commitment to expand its balance sheet, as the Federal Reserve has done and the ECB says it will do under its Outright Markets Transaction scheme (which has yet to be initiated). The BOJ expanded its assets purchase program five times in 2012. It is not immediately clear how this would be substantively different from an open-ended commitment.

The Abe government had threatened to alter the BOJ's charter to force it to comply. However, it seems to be backing down from this, suggesting that it may not seek to legislate, if the BOJ cooperates. We have previously recognized that with the BOJ governor and two deputies' terms ending in a couple of months, the LDP can achieve its objectives with personnel decisions what it threatens.

Some observers have sought to defend the independence of the BOJ. However, we note that the BOJ's independence may not have been what many think. Under existing law, the Ministry of Finance can, for example, send representatives to BOJ meetings. Can you imagine the US Treasury Secretary dropping in on a FOMC meeting or the German Finance Minister popping in on a Bundesbank meeting, back when the Bundesbank had keys to the printing press?

On the other hand, the independence of central banks, more broadly, begs questions about independence from whom (the same political forces that we trust with grave responsibilities, including the national defense) and to what end.

Complimenting what the aggressive expansion of monetary policy, the LDP-led government will pursue an aggressive fiscal policy. A supplemental budget is being cobbled together, with reports suggesting a JPY10 trillion package. When Finance Minster Aso was Prime Minister (2008-2009) he also offered extensive fiscal support, as the global credit cycle ended dramatically.

The FY2012-13 budget is also being drafted. The near-term fiscal stimulus is not being tied to longer term fiscal consolidation. Abe feels no compulsion to respect the DPJ's self-imposed JPY44 trillion annual debt cap. The Abe government has also indicated that it is considering investing directly in some companies to help them cope with the economic situation.

Complimenting the aggressively accommodative monetary and fiscal policy, Abenomics wanted the yen to fall. Without taking a single action, Abe and the LDP appear to have been more successful than BOJ intervention in weakening the yen. Finance Minister Aso has suggested a JPY90 target, which is within striking distance. Some Japanese producers have weighed in, preferring a JPY100 target.

Moreover, as the yen has weakened the Nikkei has rallied. Foreign investors, who had been large buyers of Japanese government bonds earlier in 2012, finished the year as strong buyers of Japanese shares. In a weak yen environment, Japanese stocks outperform bonds. Japanese 10-year bond yields have crept higher recently, but have actually outperformed US Treasuries, German bunds and UK gilts in recent weeks.

The third-prong of the LDP's program is nationalism. It has taken several forms. The DPJ eschewed controversial visits to the war shrine. Top LDP officials do not. The LDP has suggested interest in re-writing a 1995 apology about its aggressiveness and colonization policies in East Asia.

It has not shown any conciliatory tone in the dispute over the Senkaku-Diaoyu islands with China. This simmering dispute with China seems to be doing what North Korea failed to do by launching missiles in Japan's direction and what US urging was unable to accomplish, namely an emerging consensus favoring a re-militarization of Japan. Perhaps most telling about the regional tension with a more assertive China, the Philippines recently endorsed the re-arming of Japan.

The rise of nationalism does not bode well for Japan's participation in the Trans-Pacific Partnership, an attempt to build a free-trade area covering both sides of the Pacific. Although it was somewhat controversial for the DPJ, it had seemed to be moving in a supportive direction. The LDP (and the interests it represents) seem more hostile.

Thus far, there seems to be little push back against thrust of the LDP's monetary and fiscal policies. The purposeful depreciation of the yen has not spurred protests by other countries, but we suspect that a continued sharp decline will antagonize Japan's competitors, including South Korea and China. Although most of Japanese cars sold in the US are made in the US, US auto companies may also express their frustration.

The Senkaku-Diaoyu dispute with China is likely to be prolonged. Although in his first stint in office Abe struck a conciliatory tone with China, this time seems a bit different Japan violated the status quo by, in effect, nationalizing the islands, but yet does not seem prepared to confront China directly.  China did not pick the timing or place for the tension, but seems bent on seeking the advantage. Its new leaders cannot back down without risking emboldening a number of other countries with whom it has unresolved territorial disputes with.

Marc Chandler is the current Global Head of Currency Strategy at Brown Brothers Harriman in October 2005. Previously he was the chief currency strategist for HSBC Bank USA and BNY Mellon. In addition to being quoted in the financial press daily, Chandler has been published in the Financial Times, Foreign Affairs, and the Washington Post. In 2009 Chandler was named a Business Visionary by Forbes.

Abenomics: Japan's Thermidor is republished with permission from Marc to Market.