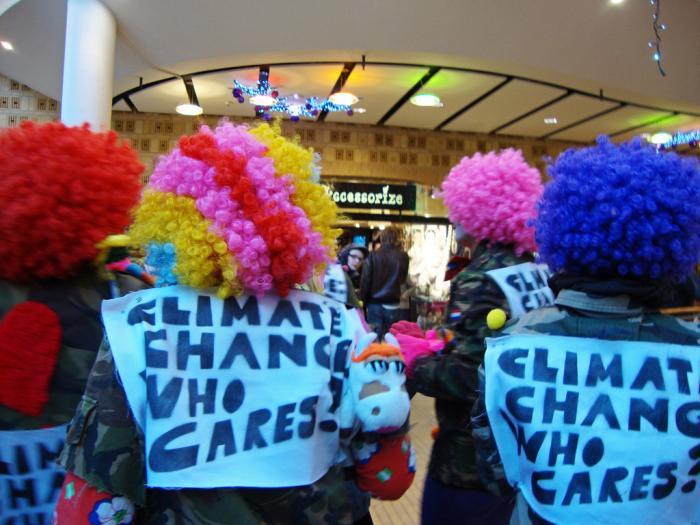 For many years, the risk of climate change was widely regarded as something far in the future, a risk perhaps facing our children or their children. But recent global events suggest that we have now entered a new and very dangerous era of global climate shifts, one that corporate lobbies and media propagandists are still attempting to deny.

NEW YORK – For years, climate scientists have been warning the world that the heavy use of fossil fuels (coal, oil, and natural gas) threatens the world with human-induced climate change. The rising atmospheric concentration of carbon dioxide, a byproduct of burning fossil fuels, would warm the planet and change rainfall and storm patterns and raise sea levels. Now those changes are hitting in every direction, even as powerful corporate lobbies and media propagandists like Rupert Murdoch try to deny the truth.

In recent weeks, the United States has entered its worst drought in modern times. The Midwest and the Plains states, the country’s breadbasket, are baking under a massive heat wave, with more than half of the country under a drought emergency and little relief in sight.

Halfway around the world, Beijing has been hit by the worst rains on record, with floods killing many people. Japan is similarly facing record-breaking torrential rains. Two of Africa's impoverished drylands – the Horn of Africa in the East and the Sahel in the West – have experienced devastating droughts and famines in the past two years: the rains never came, causing many thousands to perish, while millions face life-threatening hunger.

Related: Plenty of Fishes in the Sea? Think Again.

Scientists have given a name to our era, the Anthropocene, a term built on ancient Greek roots to mean “the Human-dominated epoch” – a new period of earth’s history in which humanity has become the cause of global-scale environmental change. Humanity affects not only the earth’s climate, but also ocean chemistry, the land and marine habitats of millions of species, the quality of air and water, and the cycles of water, nitrogen, phosphorus, and other essential components that underpin life on the planet.

For many years, the risk of climate change was widely regarded as something far in the future, a risk perhaps facing our children or their children. That threat would, of course, have been reason enough to act. Yet now we understand better that climate change is also about us, today’s generation.

We have already entered a new and very dangerous era. If you are a young person, climate change and other human-caused environmental hazards will be major factors in your life.

When the temperature is especially high, or rains are especially heavy or light, scientists try to assess whether the unusual conditions are the result of long-term climate change or simply reflect expected variability. So, is the current US heat wave (making this the hottest year on record), the intense Beijing flooding, or the severe Sahel drought a case of random bad weather, or merely the result of long-term, human-induced climate change?

For a long time, scientists could not answer such a question precisely. They were unsure whether a particular weather disaster could be attributed to human causes, rather than to natural variation. They could not even be sure that they could detect whether a particular event (such as a heavy rainfall or a drought) was so extreme as to lie outside the normal range.

In recent years, however, a new climate science of “detection and attribution” has made huge advances, both conceptually and empirically. Detection means determining whether an extreme event is part of usual weather fluctuations or a symptom of deeper, long-term change. Attribution means the ability to assign the likely causes of an event to human activity or other factors. The new science of detection and attribution is sharpening our knowledge – and also giving us even more cause for concern.

Several studies in the past year have shown that scientists can indeed detect long-term climate change in the rising frequency of extreme events – such as heat waves, heavy rains, severe droughts, and strong storms. By using cutting-edge climate models, scientists are not only detecting long-term climate change, but also are attributing at least some of the extreme events to human causes.

The past couple of years have brought a shocking number of extreme events all over the planet. In many cases, short-run natural factors rather than human activity played a role. During 2011, for example, La Niña conditions prevailed in the Pacific Ocean. This means that especially warm water was concentrated near Southeast Asia while colder water was concentrated near Peru. This temporary condition caused many short-term changes in rainfall and temperature patterns, leading, for example, to heavy floods in Thailand.

Yet, even after carefully controlling for such natural year-to-year shifts, scientists are also finding that several recent disasters likely reflect human-caused climate change as well. For example, human-caused warming of the Indian Ocean probably played a role in the 2011 severe drought in the Horn of Africa, which triggered famine, conflict, and hunger, affecting millions of impoverished people. The current US mega-drought probably reflects a mix of natural causes, including La Niña, and a massive heat wave intensified by human-caused climate change.

The evidence is solid and accumulating rapidly. Humanity is putting itself at increasing peril through human-induced climate change. As a global community, we will need to move rapidly and resolutely in the coming quarter-century from an economy based on fossil-fuels to one based on new, cutting-edge, low-carbon energy technologies.

The global public is ready to hear that message and to act upon it. Yet politicians everywhere are timid, especially because oil and coal companies are so politically powerful. Human well-being, even survival, will depend on scientific evidence and technological know-how triumphing over short-sighted greed, political timidity, and the continuing stream of anti-scientific corporate propaganda.

See also: Ensuring Sustainable Development Is A Matter Of Human Decency: Jeffrey SachsSee also: Green growth or de-growth: What is the best way to stop businesses destroying the biosphere?