Obama vs. Romney – Does It Really Matter To The Economy?: Mohamed El-Erian 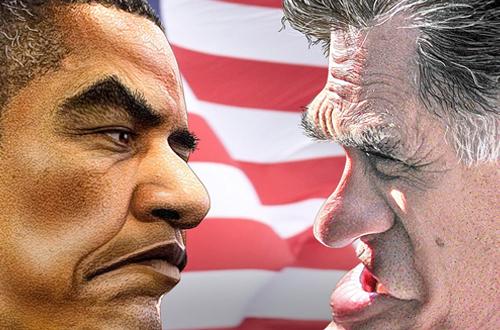 Regardless of who wins the upcoming U.S. presidential elections, the next American president will only have limited room for manoeuvre on economic policy. The real choice as such should concern the social policies that accompany a broadly similar set of economic measures; and, here, the differences between the candidates are highly consequential.

NEWPORT BEACH – The conventional wisdom about the November presidential election in the United States is only partly correct. Yes, economic issues will play a large role in determining the outcome. But the next step in the argument – that the winner of an increasingly ugly contest will have the luxury of pursuing significantly different policies from his opponent – is much more uncertain.

By the time the next presidential term starts in January 2013, and contrary to the current narratives advanced by the Obama and Romney campaigns, the incumbent will find himself with limited room for manoeuvre on economic policy. Indeed, the potential differences for America are elsewhere, and have yet to be adequately understood by voters. They centre on the social policies that would accompany a broadly similar set of economic measures; and, here, the differences between the candidates are consequential.

Whoever wins will face an economy growing at a sluggish 2 percent or less next year, with a nagging risk of stalling completely. Unemployment will still be far too high, and almost half of it will be hard-to-solve, long-term joblessness – and even more if we count (as we should) the millions of Americans who have dropped out of the labour force.

Related: America’s False Recovery – Why The US Is Not An Oasis Of Prosperity: Stephen Roach

The financial side of the economy will also be a source of concern. The fiscal deficit will continue to flirt with the 10 percent-of-GDP level, adding to worries about the country’s medium-term debt dynamics. The banking sector will still be “de-risking,” limiting the flow of credit to small and medium-size companies and undermining hiring and investment in plant and equipment. And the household sector will be only partly through its painful de-leveraging phase.

The policy front will be equally unsettling. Having dithered and bickered for too long, the US Congress will find it increasingly difficult to postpone action on these challenges. Meanwhile, the Federal Reserve’s unusual activism, including an ever-expanding list of experimental measures, will yield fewer benefits and entail growing costs and risks.

The US economy will also be operating in a more difficult global environment. In the next few months, Europe’s debt crisis will most likely worsen. With emerging economies (including China) slowing, and with meaningful multilateral policy coordination remaining inadequate, protectionist pressures will mount as major trading powers compete for a stagnant pie.

So, whether President Barack Obama or Mitt Romney prevails in November, the next president will be constrained by the twin need for urgent economic stabilization and longer-term reforms. And, with headwinds from Europe and a synchronized global slowdown, the candidates will have no choice but to pursue, at least initially, similar economic policies to restore dynamic job creation and financial stability.

In striking the right balance between immediate economic stimulus and medium-term fiscal sustainability, the most urgent step will be to counter properly the looming fiscal cliff, as temporary tax cuts expire and deep, across-the-board spending reductions kick in automatically. Failure to do so would significantly increase the risk of an outright American recession.

Serious medium-term budget reforms are needed to deal with the legacy of repeated congressional failures. And, if provided with realistic numbers, the next president will soon recognize that the right mix of tax and spending reforms falls into a much narrower range than today’s competing political narratives suggest. It is certainly not an either/or proposition.

Fiscal reforms work best in a dynamic economy. To this end, Obama and Romney will need to lift the impediments to growth and job creation. Here again – in areas like housing, the labour market, credit intermediation, and infrastructure – there is less room for manoeuvre than most politicians would like us to believe.

But this does not mean that there is no scope for differences. There is, and they reflect the fact that general economic tendencies will be accompanied by multi-speed dynamics at many levels. From persistent differences in unemployment rates depending on skills and education to record-high income and wealth inequalities, each economic decision will be accompanied by the need for social judgment – whether explicit or, more likely, implicit – regarding its distributional impact.

After an “age” of excessive leverage, debt creation, and credit entitlement that culminated in the 2008 global financial crisis, America still faces the tricky challenge of allocating cumulative losses that continuously inhibit investment, jobs, and competitiveness. Until now, Congress’s excessive political polarization has translated into an approach that has pushed more of the burden of adjustment onto those who are less able to bear it.

In an ideal world, America’s next president would rapidly embark on a two-step approach to restoring job dynamism and financial soundness. First, he would devise a comprehensive set of economic-policy initiatives that are both feasible and desirable – and, again, the scope for major differences here is limited. Second, he would accompany this with an explicit set of social policies – and here the potential differences are profound – that addresses the need for equitable burden-sharing.

This is not really an election about such hotly-debated issues as outsourcing, tax increases versus entitlement reforms, government control of production versus unfettered private sector activity, or job creators versus free riders. It is much more about the accompanying concepts of social fairness, entitlement, equality and, yes, standards of behaviour for a rich and civilized society.

Related: The Pursuit of Happiness – Will Economic Objectives Stand in the Way? : Jeffrey D. Sachs

This is an election about social responsibility – a society’s obligation to support those who are struggling, through no fault of their own, to find jobs and make ends meet. It is about protecting the most vulnerable segments of society, including by providing them access to proper health coverage. It is about reforming an education system that fails America’s young people (and about providing appropriate retraining to those who need it). Among the numerous issues of fairness and equality, it is about the rich giving back to a system that has brought them unimaginable wealth.

It is here where the differences between Obama and Romney are important. The sooner the campaign debate pivots to this, the greater the probability that Americans will make a more informed choice and, thus, buy into the collective effort needed to escape national malaise.