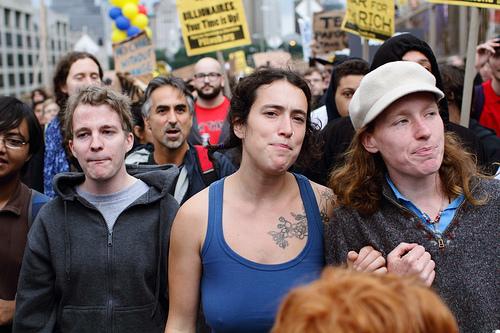 Modern capitalism, as we know it, is a sick and distorted perversion of its true origins. Since the 1980s, the form of capitalism that has dominated western economies has been one where large corporations and most financial institutions are able to privatize their gains whilst socializing their losses. The recent Occupy Wall Street movement, as such, isn’t so much as a retaliation against capitalism, but rather against its modern incarnation.

There may be a good few Maoists, Trotskyists, Anarcho-Syndicalists and even the odd deluded benefit scrounger among them, but it is simply wrong to characterize the Occupy Wall Street protestors who are camping out in 1,500 cities worldwide as wanting to overthrow capitalism, in the same way the sans-culottes toppled France's Ancien Régime in 1789 or that the Tahrir Square protesters toppled Egypt's president Hosni Mubarak.

The movement is more nuanced than that. As I tried to explain in my blog, 'Democracy for sale', what the protesters really want is political and financial reform. They want to replace the corroded crony capitalism that has predominated in the West since the 1980s – as well as the corrupt political and financial system, rigged in favour of the rich and powerful, that underpins it – with a saner version of capitalism and a more inclusive democracy.

The investment banker who blogs under the pseudonym The Epicurean Dealmaker summed it up well in a tweet on October 17:

"@EpicureanDeal I suspect most Americans sympathetic to #OWS want capitalism *back*, not Marxism. Right now we have socialism for corporations."

He was referring to the fact that, under the current distorted model of capitalism, some large corporations and most financial institutions are able to privatize their gains whilst socializing their losses. In the absence of any Schumpeterian "creative destruction" the whole system became corrupted.

A classic example is the reluctance of the UK authorities to properly investigate the frauds and malfeasance that contributed to the demise of the Royal Bank of Scotland and HBOS. The authorities' lack of enthusiasm for properly investigating such things almost certainly stems from the government's fear that to do so would further undemine the value of its equity stakes in the banks. Writing on the Naked Capitalism blog, David Graeber said the real reason the Occupy Wall Street protests have taken off is:

"[Outrage at the] government’s alliance with the financial sector—the fact that bribery has, effectively, been made legal in America, a country that nonetheless presumes to go around the world pretending it is some sort of beacon of democracy."

In a leader column published on October 17, the Financial Times spelt out why governments around the world ought to be taking the Occupy movement seriously. The newspaper said this is because the increased likelihood of a 'double dip' recession has reinforced:

"...the impression that the political class is in hock to vested financial interests to the detriment of its service to the public. Re­forms to election campaign financing could be a first step to repairing this perception ... The cry for change is one that must be heeded."

Matt Taibbi, the Rolling Stone journalist who gave impetus to the Occupy Wall Street movement with a series of powerful critiques of the deeply flawed investment bank Goldman Sachs, believes that the Occupy protest movement is gaining traction. In a riposte to bizare conspiracy theories emanating from the apparently delusional shock jock Rush Limbaugh, Taibbi wrote:

"The dukes and earls high up in America’s Great Tower of Bullshit are starting to blink a little bit. They seem genuinely freaked out that Occupy Wall Street doesn’t have leaders or a single set of demands, which, in addition to being very encouraging, is quite funny."

Perhaps unsurprisingly given the sick version of capitalism that now proliferates in western countries, even the pro-free-market The Economist has come down on the side of the protestors. In a series of telling graphs the Pearson-owned magazine spelt out the fallout of three decades of "casino" capitalism, in which the state always picks up the losses. The graphs show a disastrous legacy of over-leveraged governments, very high unemployment (including youth unemployment of 46% in Spain) and anaemic growth. As The Economist intoned:

"One reason why these protests are so interesting is that their targets, those cheerleaders for globalisation, capitalism and free markets, tend to agree that the system needs fixing. This makes the 'Occupy' protests, as they have come to be known in the English-speaking world, hard to argue against."

While newspapers, including The Wall Street Journal and The New York Times, and TV news channels like Fox News have, to varying degrees, sought to undermine the Occupy movement, marginalize it, and pretend that its goals are unfathomable (a stance mocked in this cartoon), the governor of Canada's central bank, Mark Carney, has declared the movement to be “entirely constructive".

“It makes it more tangible, the challenges that that economy is facing, and it makes it more important to demonstrate success on issues such as financial reform."

I tend to agree with Mr. Carney. So what is it that the Occupy protesters are trying to to achieve again? Well, in case you need reminding, I suggest you listen to 'Everybody Knows' by Leonard Cohen. If you can't do that (or you can't stand Leonard Cohen) you should read the words of investor, author and blogger Barry Ritholtz in a brilliant column in the Washington Post, Ritholtz proposed three simple and easily comprehensible steps (which he further fleshed out in the article):

3. Get Wall Street money out of the legislative process

I know this would entail taking on some massive vested interests in both government and finance, as well as completely overhauling the way in which political parties are funded. But, to me at least, it seems that changes along these lines are needed urgently. The hope is that our politicians will recognize that. If they don't, I'm afraid things are only going to get worse.

Since writing this I became aware that Occupy Wall Street has ambitious plans to hold a National Convention in Philidelphia on July 4, 2012, which, according to the headline in Henry Blodget's 'Business Insider', "could change the face of America". Writing in 'Business Insider', Linette Lopez said:

The dukes and earls in America’s Great Tower of Bulls**t are starting to blink a little. is republished with permission from the QFinance Blog. Get the QFinance Dictionary of Business and Finance iOS app for a comprehensive guide to financial terms and expressions.