Is China Heading For An Economic Slowdown? 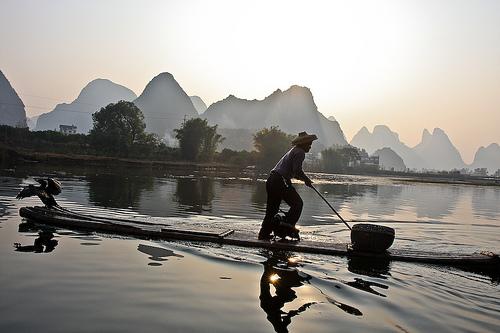 Last week, Beijing released its June inflation and national trade account figures, with data suggesting that the government’s current measures to cool down its economy may be inadequate.

China’s stellar economic performance and astounding growth rates, even during the recent global and regional economic turmoil, have been seen as a pillar of support and point of reference for investor sentiments and many recovering economies around the world. China, however, continues its struggle in fighting inflation as it accelerated to a three-year high of 6.4 per cent in June.

In a bid to cool surging inflation, the Chinese central bank raised key interest rates for a third time this year. Benchmark rates for one-year loans were raised by 25 basis points to 6.56 per cent.

Additionally, the customs agency announced yesterday that China’s June import growth decelerated to 19.3 per cent, a sharp decline from May’s 28.4 per cent. June’s export rose by 17.9 per cent, hitting a record high of US$121.5 billion. China’s trade surplus widened by more than US$23.3 billion, increasing the amount of capital inflows and adding to the frustrations of policy makers.

What do these figures mean?

With the slowdown of several key industries, fears are mounting that an interest rate hike might trigger a decline in the overheated Chinese economy. Analysts are already predicting another rate increase this year, raising doubts over the efficacy of contractionary monetary policies.

Despite the latest rate hike, China’s real interest rates, or inflation-adjusted interest rates, are still negative, encouraging the channeling of excess cash towards consumption and investment which can add pressure to stubbornly-high price levels.

With the US and euro-zone economies struggling with their own economic troubles, China has been an important engine of growth and many fear that a slowing Chinese economy might further exacerbate the problems faced in the West.

Memories Of The US Financial Crisis

Last week, China’s auditor-general revealed a staggering US$1.65 trillion of local government debt, with the China Daily calling it a massive exposure of the banking system since 80 per cent of the debt is owed to China’s national banks. The latest hike in borrowing rates is set to boost the cost and burden for local governments that sought financing for planned public expenditures.

According to ratings agency Moody’s, however, Chinese authorities may have understated total local government debt by US$540 billion. Moody’s also raised the flags last week over accounting and corporate governance risks at 49 Chinese firms.

Following the key interest rate hike and the foreboding warning from Moody’s, Singapore’s state investor Temasek Holdings was reported to have sold off part of its stake in two of China’s largest lenders, Bank of China and China Construction Bank. The move by Temasek Holdings caused both banks to close more than 3 per cent lower on the Hong Kong Stock Exchange.

The news of China’s debt undoubtedly conjures up faint memories of the ongoing US debt crisis. But compared to the country’s overall reserves, the debt problem may not be so big. China has several remedies such as bond issuance in the open market, and is also well poised to afford a write-off should the loans go sour.

Still, many are bullish and confident of the long run outlook for the Chinese economy. For American investor Jim Rogers, chairman of Rogers Holdings and Beeland Interests Inc., China may experience an economic decline in the future but it would not be sufficient to cause its collapse.

“Every country, every family, every individual has setbacks as they rise. China is going to have some horrible setbacks. America had unbelievable setbacks as we rose,” he said.

Yet, the risk of a bubble in China is real and should not be brushed off so quickly. The key issue is what the Chinese government does to mitigate it.

Economic growth and performance indicators are particularly significant for the ruling communist party as it underpins their claim to power and any economic mismanagement can fuel unrest.

China’s “kind of growth is unsustainable, and it won’t be able to cover up China’s underlying vulnerabilities forever. China’s reliance on exports and a controlled currency for growth, for instance, will not work if US consumers are engaged in a chronic saving spree.”

China has repeatedly vowed to restructure its economy, reducing its dependence on exports and investment and promoting domestic consumption in their place. But with only 8% of China’s vast population possessing meaningful discretionary consumption power, more has to be done before China can realize any real internal reforms.