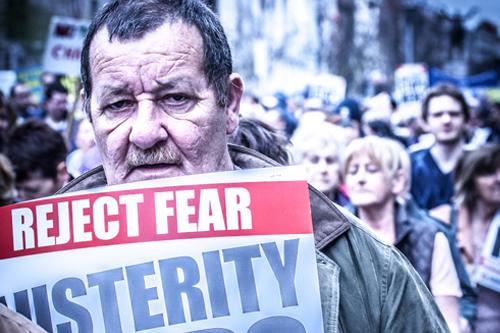 Europe’s single-minded focus on austerity is a result of a misdiagnosis of its problems; and the fact that so many economies are vulnerable to natural disasters only makes the man-made disaster of austerity all the more tragic. Accordingly, the pain that Europe, especially its poor and young, is suffering as a result of its leaders’ willful ignorance of the lessons of the past is entirely unnecessary.

NEW YORK – This year’s annual meeting of the International Monetary Fund made clear that Europe and the international community remain rudderless when it comes to economic policy. Financial leaders, from finance ministers to leaders of private financial institutions, reiterated the current mantra: the crisis countries have to get their houses in order, reduce their deficits, bring down their national debts, undertake structural reforms, and promote growth. Confidence, it was repeatedly said, needs to be restored.

It is a little precious to hear such pontifications from those who, at the helm of central banks, finance ministries, and private banks, steered the global financial system to the brink of ruin – and created the ongoing mess. Worse, seldom is it explained how to square the circle. How can confidence be restored as the crisis economies plunge into recession? How can growth be revived when austerity will almost surely mean a further decrease in aggregate demand, sending output and employment even lower?

This we should know by now: markets on their own are not stable. Not only do they repeatedly generate destabilizing asset bubbles, but, when demand weakens, forces that exacerbate the downturn come into play. Unemployment, and fear that it will spread, drives down wages, incomes, and consumption – and thus total demand. Decreased rates of household formation – young Americans, for example, are increasingly moving back in with their parents – depress housing prices, leading to still more foreclosures. States with balanced-budget frameworks are forced to cut spending as tax revenues fall – an automatic destabilizer that Europe seems mindlessly bent on adopting.

There are alternative strategies. Some countries, like Germany, have room for fiscal maneuver. Using it for investment would enhance long-term growth, with positive spillovers to the rest of Europe. A long-recognized principle is that balanced expansion of taxes and spending stimulates the economy; if the program is well designed (taxes at the top, combined with spending on education), the increase in GDP and employment can be significant.

Europe as a whole is not in bad fiscal shape; its debt-to-GDP ratio compares favourably with that of the United States. If each US state were totally responsible for its own budget, including paying all unemployment benefits, America, too, would be in fiscal crisis. The lesson is obvious:  the whole is more than the sum of its parts. If Europe – particularly the European Central Bank – were to borrow, and re-lend the proceeds, the costs of servicing Europe’s debt would fall, creating room for the kinds of expenditure that would promote growth and employment.

There are already institutions within Europe, such as the European Investment Bank, that could help finance needed investments in the cash-starved economies. The EIB should expand its lending. There need to be increased funds available to support small and medium-size enterprises – the main source of job creation in all economies – which is especially important, given that credit contraction by banks hits these enterprises especially hard.

Europe’s single-minded focus on austerity is a result of a misdiagnosis of its problems. Greece overspent, but Spain and Ireland had fiscal surpluses and low debt-to-GDP ratios before the crisis. Giving lectures about fiscal prudence is beside the point. Taking the lectures seriously –  even adopting tight budget frameworks – can be counterproductive. Regardless of whether Europe’s problems are temporary or fundamental – the eurozone, for example, is far from an “optimal” currency area, and tax competition in a free-trade and free-migration area can erode a viable state – austerity will make matters worse.

The consequences of Europe’s rush to austerity will be long-lasting and possibly severe. If the euro survives, it will come at the price of high unemployment and enormous suffering, especially in the crisis countries. And the crisis itself almost surely will spread. Firewalls won’t work, if kerosene is simultaneously thrown on the fire, as Europe seems committed to doing: there is no example of a large economy – and Europe is the world’s largest – recovering as a result of austerity.

As a result, society’s most valuable asset, its human capital, is being wasted and even destroyed. Young people who are long deprived of a decent job – and youth unemployment in some countries is approaching or exceeding 50 percent, and has been unacceptably high since 2008 – become alienated. When they eventually find work, it will be at a much lower wage. Normally, youth is a time when skills get built up; now, it is a time when they atrophy.

So many economies are vulnerable to natural disasters – earthquakes, floods, typhoons, hurricanes, tsunamis – that adding a man-made disaster is all the more tragic. But that is what Europe is doing. Indeed, its leaders’ willful ignorance of the lessons of the past is criminal.

The pain that Europe, especially its poor and young, is suffering is unnecessary. Fortunately, there is an alternative. But delay in grasping it will be very costly, and Europe is running out of time.